Over the holidays, I borrowed Iron Man 3  just so I can see the Marvel one-shot about Peggy Carter (Hayley Atwell) and it was a pretty awesome 15 minutes showing just how much a bad-ass Carter is. From my understanding, Marvel’s Agent Carter takes place shortly after the events of Captain America: The First Avenger  but before the one-shot.

So we begin the “Pilot” with the scene in the film of Captain America (Chris Evans) making the sacrifice to crash the plane into the ocean. We intercut those scenes with Carter in 1946 New York City getting a start in her day that includes her reading that Howard Stark (Dominic Cooper) has gotten into trouble with the government for selling his weapons to the enemy. We also see the scene in the film of Carter introducing Captain America to Stark. And we see more scenes from the film of Carter just being a general badd-ass.

Peggy shares an apartment with a young blonde woman named Colleen who works nights as is just coming home from a day of work. Colleen tells Carter that 10 women got laid off because 10 men, who returned from war, got their jobs back. Colleen thinks Carter works for the phone company. We see some newsreel footage too of Stark’s testimony to congress where we see him be less that cooperative.

When Carter arrives at work, the pre-cursor to SHIELD, the Strategic Scientific Reserve (SSR) are on the trail of Stark who has taken a powder and is no where to be found. Showing how awesome Carter is, when her boss Roger Dooley (Shea Whigham) tells her to man the phones, she makes a call to have all call forward elsewhere, she joins the meeting.

Plans are being made on how to best find Stark and when Carter defends Stark saying she knew him during the war, the men just laugh her off and shoves her little romance with Captain America in her face. Only one agent, Daniel Sousa (Enver Gjokaj) comes to her defence. But no one take him seriously either has he was severely injured in the war and now walks with the aid of crutch. Carter thanks him for defending her but says that she can take care of herself.

Carter frequents a diner and is friends with aspiring Broadway actress Angie (Lyndsy Fonseca) who gives her encouragement to fight through the old boys club at work. Like Colleen, Angie thinks that Carter works at the phone company. Carter also notices that Angie has a bothersome customer.

When Carter comes back to her table after retrieving some delicious looking pie, she finds a note on a napkin asking her meet in the alley in 5 minutes. After a quick scan of the diner to see who may have left the note, Carter goes to the alley where she is approached by a dapper dressed British man, who doesn’t quite state his intentions well so Carter just punches him. Carter is then pursued by a car but she manages to shoot one of its tires when the driver, Stark emerges.

On the drive to the docks, Start needs Carter’s help. It seems that someone broke into Stark’s vault and stole 6 of his bad babies, weapons that are too dangerous for any one. Stark needs someone on the inside of SSR to help clear his name and prove that he is not a traitor. Stark further tells Carter that one of the weapons has already been sold overseas and that is where he is off too via motor boat. Stark needs Carter to track the rest of the weapons that are still stateside, where one of the weapons, a formula for a very dangerous explosive chemical that when weaponized can take out whole city blocks. To help Carter, Stark have given her the services of his butler, Edwin Jarvis (James D’Arcy).  Jarvis tells Carter that she can call him anytime till 9pm, which is when he and his wife go to bed.

Carter sets to work to find the formula and throws Sousa off the scent of Stark and learns from him that Dooley, Thompson (Chad Michael Murray) and Krzeminski (Kyle Bornheimer) have found out that Spider Raymond is buying the formula and plan their mission to invade his club. Carter manages to listen in on the planning and meeting on the pretext of serving them coffee. When Dooley asks her to leave, Thompson, a chauvinistic pig, says that Carter can stay so she can learn something. What we learn from this meeting, that Carter takes away is that Raymond likes blondes. 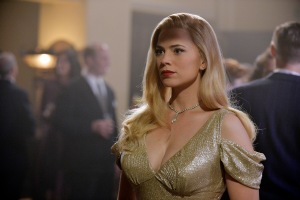 So who should show up at Raymond’s nightclub but Carter sporting a platinum blonde wig.

We see Raymond pay for Stark’s weapon to a silent man (James Frain). When this silent man leaves (he is never named in the episode but IMDB lists him as Leet Brannis), Carter uses her feminine wiles to gain entry. Carter tries to find the location of the formula from Raymond, who is all hands and doesn’t say anything but instead kisses her. Thanks to Carter applying Sweet Dreams lipstick, Raymond is knocked out.

Carter uses a cool piece from her watch to break into Raymond’ safe where she finds that Stark’s formula has been weaponized. A quick call to Jarvis, interrupting him making a souffle for the wife, tells her that if it is glowing that that means trouble (it is glowing) and it is very important that the core not touch a certain something. Jarvis also outlines several chemicals that will neutralize it.

After carefully placing the weapon in her purse, Carter almost gets caught by one of Raymond’s men but uses a stapler to fight her way out. A thin looking man walks by Carter as she leaves Raymond’s office. When he goes into Raymond’s office, he finds Raymond in front of the empty safe and shoots him dead. We then see this man observe Carter get into a cab. 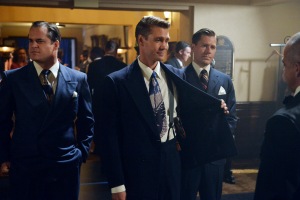 When Thompson and Krzeminski arrive, they find Raymond dead and the safe empty too.

Carter arrives home and is surprised that Colleen is there, who sent home sick. As Colleen sleeps, Carter quickly assembles the chemicals needed to neutralize the weapon in the bathroom. Afterwards, Carter hears a noise and when she emerges, she finds Colleen shot dead. The thin man is still in the apartment and the two fight. Carter notices a scar on his throat during the fight, which she wins by pushing him out the window but he is not dead as when Carter looks out the window, there is no body.

The next day at the diner, Jarvis consoles Carter over Colleen’s death. Carter realizes she can’t take the weapon into the SSR so Jarvis suggests they go to Stark Industries, where the doctor there mentions that while neutralized, it is still emitting Vita Rays. This rings a bell in Carter who goes to the file room of the SSR and pokes around Captain America’s file box. Carter is caught staring wistfully at pre-Cap’s picture (the one of skinny Steve Rogers) by Sousa. Sousa understands about loss and shares a bit about what happened to him during the war. When Sousa leaves, Carter retrieves Dr. Erskine’s Vita Ray calibrator.

Meanwhile, in a hotel room, the thin man has plugged in his typewriter to set up some sort of old-school instant chat. Thin Man mention Carter getting in the way and wants to know if he should terminate her. The type writer types on its own that the Thin Man should complete the mission at all costs.

Outside of Roxxon Refinery, Carter and Jarvis are casing the joint. When the coast seems to be clear, Carter scales a electrified fence with ease and my admiration for her character just keeps on increasing. Using the calibrator, Carter manages to find the source. Two men, which include Brannis have just made another weapon. When Jarvis notices some men approach, he calls her on the radio that alerts Brannis partner who goes to investigate. Carter subdues him with a bright flash and gives chase to Brannis.

Carter catches up to him and tries to stop him from getting away with the weapon but unfortunately, Brannis reveals to Carter a dairy truck filled with them. Carter wants some answers but Brannis like Thin Man has a scar on his throat and uses a device that allows him speak Hawking-like. Carter tells him that the Thin Man is probably on his way and she wants his name or she will blow them both up. Brannis won’t reveal it but says they are dead anyways if Thin Man is coming. Brannis when mentions the name Leviathon before smashing the weapon to the floor and takes off telling Carter she has 30 seconds to escape.

Carter calls Jarvis to bring the car around and after being shot at, Jarvis and Carter manage to escape just before the refinery explodes.

At the SSR, Thompson and Dooley are trying to find the blonde at the club (a photograph apparently was taken of the blonde, but we saw Carter expertly avoiding the camera) when they get alerted to the explosion at the refinery and they take off where I would assume the identity of the blonde will remain a mystery to the men for now.

The next day at the cafe, Jarvis and Carter discuss the events of the previous evening and Jarvis leaves to look in Stark’s file for any mention of Leviathon.

When we see the customer being rude to Angie again, Carter puts him in his place and he leaves after giving Angie a generous tip.

Outside the cafe, we see Jarvis on the phone with a woman (I didn’t catch the name but if someone did, please let me know in the comments) saying that Carter is the right choice for something and she doesn’t know what will hit her.

And so ends the first of 8 episodes of Agent Carter. It was a strong episode and it was thanks to Atwell, who was so good as Peggy Carter. Atwell brought sensitivity and strength to the part that I look forward to more episodes.