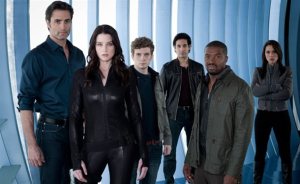 After promising fans that word of the show’s renewal would come in August, Showcase has finally announced what fans have been wanting a fourth season Continuum but there is a twist: it will be the final season and will only be six episodes long. Hopefully this also means that SyFy will pick up the final season. [Update] SyFy has announced it has picked up the show.

Well it is better than nothing. Glad that we can find out what will happen to our Vancouver after several Halo-looking type of soldiers landed on Third Beach. And the show will get a chance to end how it wants to end. Below is the full Shaw Media press release:

TORONTO, December 8, 2014 – Tonight, in an exclusive sit-down with Continuumstar Rachel Nichols, ET Canadaconfirmed that Showcase‘s Canadian original action-drama returns for a fourth and final season of six episodes airing in 2015. Continuum‘s time-mending and mind-bending tale continues following a suspenseful third season that reached more than 2.35 million viewers (v2+)* and ended with a cliffhanger finale that won the night as the #1 program in key demos for all of Canadian specialty**.

“All great stories deserve an end. I am excited and grateful to finish Continuum with the riveting conclusion it deserves,” said series star, Rachel Nichols. “This series finale is dedicated to the devoted fans who have loyally supported us since day one.”

“Continuum‘s award-winning success on Showcase is a testament to the quality of our Canadian original productions,” said Christine Shipton, Senior Vice President, Content, Shaw Media. “With Executive Producer Simon Barry at its helm, the fourth and final season of Continuum is bound to deliver a heroic conclusion to the futuristic series.”

Filmed on location in Vancouver, B.C., Continuum is developed and produced by Reunion Pictures. International distribution is handled by Endemol. The series is now seen internationally in over 132 countries.

Watch the full interview with Nichols at www.etcanada.com and catch-up on the first three seasons of #Continuum at www.showcase.ca. Continuum’s season four broadcast dates will be announced next year.