We open with Skye running around an empty SHIELD base wearing a flower dress (foreshadowing much aren’t we SHIELD). Skye is wondering where people are, especially Coulson. Skye hears the tinkling of a music box and gets transported to the base’s kitchen where she sees the music box. Coulson is there holding a Chinese language newspaper and goes to touch the music box but Skye pushes it away. Skye is then in a home and sees May and Coulson looking like a couple holding a pretty cute baby saying things like sacrifices have to be made and poison fruit. So Coulson says good bye to his angel eyes as he lays the baby down. Coulson and May walk away as Skye yells at them to come back. Skye goes to touch the music box and it starts to show the alien symbols and she starts to turn to stone. But Coulson wakes Skye up from her dream and she finds that she has fallen asleep atop of maps where the alien city is at on the Bus.

Next we see Mac playing with a toy version of Lola as a gift to Coulson in hopes he can work on the real on. Fitz wants Mac to give Simmons a message for him while Mac says he needs to talk to her at some point, Mac sees Bobbi and Hunter getting real close and chummy. There seems to be a hint of jealousy there.

On the bus, Tripp has recovered while Simmons is tending to him. The two talk about Skye’s dad and how crazy he is when Skye comes in and feels something bad going happen. But Tripp says that he has already been shot so the bad has already happened while Simmons believes they need to have positive thoughts.

May and Skye watch a news report about Senator Ward’s murder suicide. Both know that Ward is the one behind it and is a bit saddened that Senator Ward didn’t come to them for help.

In the cargo hold of the Bus, Coulson debriefs the team about how the obeslisk is a weapon but is like a key and the lock is in a temple in the alien city, which is in Puerto Rico.

We are next in Vancouver, BC (the aerial shot is actually of Vancouver). Raina is in a cafe with her sugar daddy (props to the 100 Canadian dollar bill that he flashed and its the new polymer one too). The fake Agent May aka Agent 33 is at the cafe too but Raina thinks it is the real one until she sees her face. Agent 33 tells Raina that Whitehall wants to see her and she leaves with HYDRA on her tail. Raina makes a run for it but Billy and Sam Koenigs save her and take her to a safehouse.

Billy lets Coulson know what has happened. So  Coulson decides to split team up: May, Skye and Hunter will go after Raina. Skye is along because Coulson believes Raina will open to her and to also keep her away from her lunatic father. When they split, Skye gives Coulson a hug.

It also seems that Simmons is avoiding Fitz but she does open up to Bobbi about what happened to them after Ward dropped them in the ocean. The crux is that Fitz was in a coma for 9 days and when he woke up didn’t recognize Simmons. She also tells Bobbi that she only sees Fitz as her best friend but can’t image her life without him. Bobbi tells her she needs to be honest with him.

On their way to Puerto Rico, Mac goes into overprotective big brother mode and confronts Bobbi about restarting her relationship with Hunter and whether or not she told him about something in particular especially in light of Hartley’s death. Seems there is also a secret.

When in Vancouver, again props to the BC license plates, Sam is being followed by a HYDRA agent but is saved when Hunter knocks the guy out. At the safehouse, Skye knocks on the door and shows her access card to gain entry. But also showing up is Agent 33. The two women have a brutal fight but Hunter comes in and knocks Agent 33 out.

In Puerto Rico, Coulson and Bobbi meet with Diego, one of her contacts, who has the plans for the Fort where the underground alien city is at. Coulson seems quite relaxed about the whole thing and the two have a conversation about why and what they hope to accomplish with the mission.

On the Bus, Fitz and Simmons finally have the talk, thanks to Mac, who left them alone. Simmons says it wasn’t him that caused her to leave and Fitz says he is leaving the lab in her charge and he is moving on to work in the garage with Mac. Fitz will work for her and not with her and leaves.

Back in Vancouver, Hunter, Skye and Raina are waiting for May. When Hunter goes off to find her, Skye and Raina talk about the Diviner and why HYDRA is after her. When Raina realizes that HYDRA has the Diviner, she realizes they don’t want her dead but wants her as she can touch the obelisk/Diviner. Raina tells Skye that she can too but she doesn’t believe her. Raina makes a run for it and calls out to the HYDRA agents. When they go running to her, May comes on the scene and hilariously runs them over with the van.

Agnet 33 sees them flee and mentions to Whitehall that Raina has a tracker on her.

At the Fort, Diego refuses to help the team as he is scared because of some legend that says the Garrison, where the entry point to the underground city is located, is hunted. In the Garrison, Simmons tells of the tale about how guards in the 1600 disappeared.

On bus, Raina opens up to Skye about how she met her dad. It was in Thailand and Raina was pulling cons when Mr. Skye saved her and others. Raina also tells Skye a tell from her grandmother about blue aliens from the sky knowns as the Krell. From what I remember, the Krell were about finding people that were worthy hence the Diviner. Those that aren’t worthy will die. 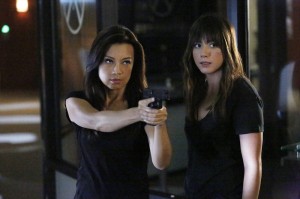 Skye believe Raina and rushes to May to say they need to warn Coulson as something bad will happen, but Whitehall found them and wants Raina or will blow up the invisible jet. May is not going down without a fight and with guns raised find that Ward has boarded the jet and says it was Raina’s

tracker that led them to her. May tells Ward that he should pick a side, he tells her that he has. Another thing he wants is Skye. After some debate on whether or not Skye should go (May vehemently doesn’t want her to, Skye thinks it is the only way), Skye does go with Ward but not before being ordered to grab the tablet that contains the location of the temple.

As the mission gets on its way, FitzSimmons get their rhythm back as they send the dwarves (I missed those guys) down the hole that they created but they go off line so Mac goes down. When Mac hits bottom, he touches the ground that has alien symbols on it. Mac hand starts to carve the symbol on his hand and he falls in pain. When Mac gets pulled up, he is not himself but manages to tell Coulson to run before the darkness takes over. Mac knocks Coulson out and fights Bobbi, they try and ice him with the night night gun but doesn’t work. The fight results in Simmons almost falling down the hole. Fitz threatens to shoot Mac with real bullets but Bobbi uses her night sticks to taser him out cold but he falls down the hole presumably to his death. Shame too if Mac is truly dead as I felt we never got to know Mac and also get to see more that is the hotness of Henry Simmons.

In the post-credit scene, Agent 33 meets with Whitehall to say that they have Raina but Ward took Skye has an insurance policy. Whitehall is intrigued and will ask Ward on why. But Whitehall is not too happy that Ward let the SHIELD plane go. So Whitehall tells Agent 33 to put in the order to take down the plane, which she does.

Will the plane go down? Of course not. Is Mac really dead? I hope not. Did Ward really choose HYDRA? Maybe. So many questions to be answered and a lot of action going to for next week’s winter finale.