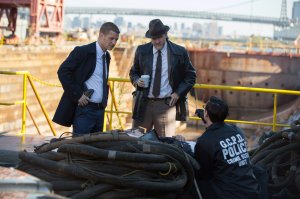 Let’s get the Fish Mooney storyline out of the way first. Liza visits Fish in a confessional of a church. Fish wants to know Liza’s progress in her mission with Falcone. Liza is unsure of what is happening with Falcone. Fish has a task for Liza and that is to get into Falcone’s private office and copy the last two pages of his ledger and give it to Fish. To help her get said documents, Fish gives Liza a drug that will knock Falcone out for a couple of hours.

While making Falcone’s tea, Liza sees unsure but ends up dumping the drug into the tea. Later, back at Fish’s club, we see her listening to an older lady sing before she grants Liza an audience. Liza wants out as she fears Falcone will find out and kill her. Liza doesn’t understand why Fish wants to take Falcone down since she is already rich and feared by others. Fish tells Liza that she was raised by a whore of a mother who was killed by one of Falcone’s men when she was a young girl. Young Fish was hiding nearby and vowed to herself to never to feel so powerless again. Liza then gives Fish what she wants and now Fish believes she has what she needs to bring Falcone down. Fish also promises to never let anything happen to Liza. Later, we find out that the old lady singing is actually Fish’s mother and Fish said the lie was necessary to get Liza to be on the program.

Meanwhile, with the Penguin, Fish meets with him to broker a peace treaty between the two mafia families of Gotham. One of the terms of peace that no blood shall be shed. Before that can come true, Fish stabs Penguin with the pin of a brooch that he had stolen earlier. Also, during this meeting, Fish introduces Penguin to his replacement, Timothy.

The Penguin ends of giving the brooch to his mother and the significant part of their conversation is Penguin realizes that everyone has secrets. So Penguin and his men take Timothy to question what he knows. Timothy, after undergoing a thorough beating, spills that someone has been planted to get close to Falcone. The Penguin’s men then kill Timothy.

In Bruce’s storyline tonight, it was all about him returning to school. Alfred believes he needs it to reconnect with peers and friends. When one such friend, Tommy approaches Bruce, the only thing he wants to talk about his about his parents murder. Bruce, not comfortable with the topic of conversation leaves but later, Tommy insults his mother that results in Bruce slapping him. After school, Bruce tells Alfred what he did but that he wasn’t satisfied with how he dealt with the Tommy situation, that he could have done more for his mother’s memory. So Alfred takes Bruce to Tommy’s house and also gives his father’s watch to him. When Tommy answers the door, Bruce beats him up good and Alfred gives him a warning not to seek retaliation and not to insult his parents again. Later that night, Bruce tells Alfred he feels angry all the time and that he wants Alfred to teach him to fight, which he readily agrees.

The main storyline had to do with a Hunger Games’ The Office edition. Gordon and Bullock are on the search of a killer of a young man, Coleman Lawson, found on the docks in a suit. Also, in Coleman’s mouth was a thumb. We learn from Colemna’s mom that he applied for a job at Sionis Investments.The episode opened with three masked men going at each other using various office supplies as weapons. We see later a masked man keeping three men in shirts and ties in cages at an abandoned office building.

As Gordon investigates this crime, Essen and Bullock notice that no one at the GCPD are willing to help him. Essen feels guilty that she was one of those that wouldn’t help Gordon from the last episode. When a tip leads Gordon and Bullock to a black market doctor, after getting the information they needed, Gordon arrests the doctor. One of the detectives is not happy that Gordon has arrested him as they had a deal going on. Bullock begs Gordon to let him go to keep the peace in the precinct but Gordon refuses.

When Gordon and Bullock go to Sionis Investments to talk to Sionis, they notice a lot of the employees are battered and beaten. When they talk to Sionis, they notice all the swords and other weapons in his office. Sionis denies any wrong doing but seems to get fired up as Gordon gets fired up. As Gordon leaves, he notices blood leading to a bathroom and finds one office worker with tissue up his nose and then gets set upon by the guy with no thumb. At the precinct, the guy confesses that Sionis makes those that apply for a position with the company go through a battle royal for the job. Nygma notes that a lot of office supplies were found in the Coleman’s body.

Gordon and Bullock split up looking for office buildings that have been abandoned but owned by Sionis. Gordon finds the right one and discovers the locked candidates but is knocked out by Sionis. When Gordon awaken, Sionis preps his candidates for the fight that states the one that kills Gordon will get a $1 million signing bonus. Gordon though he could talk sense into the candidates but after hearing the sweet offer, he knows that he is trouble.

While that is going on, Bullock comes up empty and knows that Gordon is in trouble. Bullock goes to Alvarez then another cop to look at addresses in hopes of finding Gordon but those two re-buff him. Fed up, Bullock makes a speech about how Gordon is still a cop and they should feel ashamed that they turned his back on him. Essen volunteers to look at a couple of addresses and this gets the rest of the precinct to help.

Back at the fight, Gordon does manage to take down the candidates while we see the rest of the Sionis office watching all of this unfold on TV. When it looks Sionis is going to get the better of Gordon, it is instead Gordon who does. Essen comes in and helps take down Sionis.

Later at the precinct, Gordon tells Bullock that he will continue working on bringing down the mob, the corrupt mayor and any dirty cop.

Back on the homefront, a jittery Barbara almost shot Gordon as he was coming home. Barbara is still shattered over what happened the last episode. When Gordon couldn’t talk to Barbara later on the episode, it may have been the last straw for her because later that night as Gordon leaves her a message saying things will be different and that he is coming home, we see Barbara leave him a Dear Jim letter and we see her, with luggage in hand, leaving their apartment.

In what I thought was a throwaway/wasted scene, we see two cops arrest Selina after she was caught stealing from a woman’s store. As Gordon was about to go home, a cop tells him that a kid was arrested and asked for him. When Selina sees Gordon again, she asks if he missed her.

We are now 8 episodes in of Gotham and I am still indifferent towards this show. I actually really don’t like any character. Although, I find the future Riddler to be an interesting character but I think that is about it.

What do you guys think of Gotham? I’ve already given up on one DC show (Constantine) and Gotham is getting very close to my cut list. Since next week introduces Harvey Dent, maybe will give it till the Fall Finale to see if it improves in my opinion.