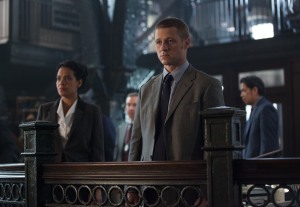 The Penguin seems to be the top dog in the Mafia world as we see him strut his stuff walking the streets of Gotham with Maroni’s bodyguards protecting him.

Fish is livid that the Penguin is still alive and asks her right hand man, Butch to bring in Gordon alive.

Despite Gordon leaving messages for Barbara to get out of town, Butch and another of his men are holding Barbara hostage at her apartment hoping that Gordon will return, which he does. Gordon gets the upper hand on the men and manages to leave with Barbara.

At the bus station, Gordon convinces Barbara to get out of Gotham while he takes care of the situation he has gotten himself into. Gordon watches Barbara’s bus leave but something tells us that she actually doesn’t leave town.

Before I get to what Gordon was up to in the episode, I will take care of all of the mafia stuff first.

At Falcone’s warehouse, Falcone is looking over chickens he is buying when Fish tells him that the Penguin has to go because he knows too much and Gordon and Bullock need to go to. Nikolai agrees with Fish. Falcone wants the two to stand down and has a plan in place. When Niko and Fish walk away, he wants to know how Liza is getting on with Falcone. Fish says that Falcone hasn’t made a move on Liza and only likes to watch her do chores.

Later at Maroni’s restaurant, Fish is there demanding that he return Penguin to Falcone. Maroni says no as the Penguin amuses him and is valuable to him but offers that the Penguin apologize, which he does. Fish doesn’t really like the apology and when Penguin calls her Fish, she definitely doesn’t like that and roughly grabs his face.

To strike back at Maroni, Falcone gets Butch to stop a shipment of good from one of Maroni’s trucks that totals $3 million. Maroni is mad at this set back but Penguin knows just were to hit Falcone. So Penguin shows Maroni right hand, Carbone where to go. It is a warehouse where Niko is at. Carbone blows the doors down and shoots the place up, killing everyone inside. The warehouse has $1 million worth goods and Penguin is proud that he led them to a good target. Carbone, not the biggest fan of the Penguin is tempted to kill him and tell Maroni that he was a victim of the shootout at the warehouse. However, the Penguin gets the upper hand and gets the other men there to hold Carbone down as he stabs him to death.

Maroni and Falcone meet and offer their condolences to the men they lost. Falcone tells Maroni that he can keep the Penguin but he wants one of his warehouse’s by the river in exchange. Maroni says no but when the Penguin whispers another offer, he then offers Falcone Indian Hill, a toxic waste plant in Arkham that Fish says is useless but Falcone accepts the property as to not look a gift horse in the mouth.

Back to Gordon, when Cobblepot revealed himself to be alive, Bullock confronts Gordon about it knowing that he too is a dead man. Gordon wants them to team up to take down Falcone and all the corruption in Gothan but Bullock doesn’t want to. When Bullock gets distracted, Gordon manages to escape.

After Gordon makes sure that Barbara left town safely, he returns to the precinct to a lot of stares and cold shoulders. When Gordon gets some blank signed arrest warrants, Captain Essen wants to know what he wants to do with those. Gordon plans on arresting the Mayor and Falcone for conspiracy in framing Mario Pepper for the murder of the Waynes. Essen says that Gordon if crazy and that no one will help bring the Mayor and Falcone in.

Since Butch failed to bring in Gordon, Falcone enlisted Victor Zsasz, who brought along two henchwomen dressed like dominatrix, enter the precinct looking for Gordon. When Gordon emerges from Essesn’s office, he refuses to go. So Zsasz clears the precinct and a good ol shoot out occurs. Gordon gets hit on his side but manages to make his way outside to where all the police cars are parked. Zsasz makes his way through the parking lot while Gordon tries his best to evade him. Unfortunately, a beat cop gets in the way and the shoot her legs to take her down but this gives Gordon the chance to escape but he gets shot in the shoulder and is down for the count. But who should come to their rescue but Allen and Montaya. That beat cop? Well Zsasz kills her and uses an x acto knife to notch the kill on his arm and says that she was 28.

Montaya and Allen take Gordon to Gotham university where a Dr. Leslie Thompkins has pulled the bullets out of him. IMDB calls the character as Leslie Thompkins but she was never named on-screen. We’ve since learned that Morena Baccarin as been cast as Thompkins so maybe that’s why we never hear this doctor’s name uttered on-screen. Despite that the doctor says he should rest, Gordon gets Allen to help leave so he can continue what he needs to do.

A part of that is to see Bruce, but before that Gordon and Montaya come to an understanding after she apologies for not believing in him.

As Gordon is preparing his showdown with the mayor and Falcone, Bullock visits him at Barbara’s apartment and says that he is in and wants to help since he is a dead man anyways.

The two manage to arrest the mayor and gets them inside Falcone’s home. When Gordon and Bullock try to arrest Falcone, he in turns says that Zsasz has Barbara hostage holding a knife to her throat. Gordon doesn’t believe him and wants proof. Falcone won’t give him proof and wants Gordon to trust him. We see that Falcone does indeed have Barbara as she is in the kitchen as Liza is making muffins with a creepy Zsasz leering over them both.

We see that Gordon does believe Falcone while Bullock thinks he was bluffing but when Barbara emerges, Bullock sees that he was telling the truth. Falcone does spare Gordon and Bullock but Gordon thinks there is some kind of catch. Falcone says there is a catch but really doesn’t sound like one. I am sure there is one.

As Falcone goes to see his chickens, the Penguin pays him a visit. We then flashback to a moment in the pilot where we see Falcone talk to the Penguin. The Penguin wants Falcone to order Gordon to kill him knowing the good guy in him won’t. Falcone wonders why as he wants him dead. Penguin has his reasons and says letting him live means he will be Falcone’s snitch for life and reveals that Fish and Nikolai are out to get him. Falcone agrees as that piece of intel interests him greatly. So everything was planned from allowing Gordon to “kill” him to the Penguin making his way up in Maroni’s organization.

I don’t know if this was the best episode of Gotham but we seem to be moving towards some parts of the Batman universe. One of the good things about all these DC Comic book shows is I get to look up about characters in this universe and see what they become. For example, Montaya and Allen work under Gordon in the future and also closely with Batman.

What did you think? Was this the best Gotham yet?