Glen Talbot is giving a speech at the UN about how SHIELD duped them into trusting them given the events of The Avengers but the events of Captain America: The Winter Soldier revealed their true colours. The Italian rep wants to believe that SHIELD is still good but alas he gets killed by a ninja star like weapon that emulates the obelisk’s power. These men including a man named Scalotti, start killing UN reps left right and centre under the guise of being SHIELD. As Talbot escapes, he seems to think that it isn’t SHIELD after all.

Coulson has to tell his team that it wasn’t them that attacked the UN and assigns May, Bobbi and Hunter to lead this mission. Bobbi and Hunter aren’t too happy to learn that they are on this mission together. The mission is to meet a Toshiro who could have intel when the next attack could be and also perhaps a weapons deal going down.

We get some shots of Ward working out shirtless with Simmons and Skye watching. Simmons’ warns Skye to be careful around Ward. 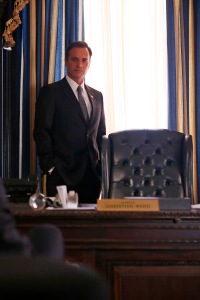 Talbot talks to the senator that he as deep pockets with and says he doesn’t believe that it was SHIELD that attacked the UN. However, the senator believes it was and won’t hear otherwise even when Talbot questions whether his judgement is clouded by his brother. We learn the senator is Christian Ward, Ward’s abusive older brother.

Coulson watches Senator Ward debate a UN rep from Belgium, a Julian Beckers, about his vendetta against SHIELD that Beckers is against. This vendetta makes Coulson worried about the safety of SHIELD agents around the world and contact an Agent Walters to go dark. Coulson tasks Skye to question Ward about his brother but warns Skye to not let him sidetrack her about her father.

Skye sees Ward about his brother gets off track talk turns to her father. One piece that Coulson learns is that Ward fears being found by his brother. So Coulson visits Christian where we learn that Ward lied about him being the abusive one but it was all Ward that beat up their younger brother. Coulson makes a deal with Christian that he will turn over Ward if he stops hi SHIELD witch hunt.

Skye goes back to see Ward where he spills all he knows about her father. That is was HYRDRA agents that killed all those villagers and that her mother was also killed. Skye’s dad was filled with such rage that he killed the HYDRA agents. Skye wants to know who or what her father is but Ward won’t tell her but wants them to escape together to find him together. Skye says that Ward is getting out but into the hands of his brother.

When Coulson goes to see Ward, Ward tries to talk Coulson out of turning him over to his brother. Coulson gets offended when Ward mentions still being part of his team and how his intel was valuable and that he has never lied to Skye. Coulson says that Ward was useful for a bit but now Christian is the more valuable Ward.

On the plane ride over to Okinawa, Japan, Hunter and Bobbi make some small chit chat about their past relationship that ends when Bobbi goes to talk to May, where we learn that she was once married.

In Okinawa, Bobbi goes to meet Toshiro where we learn that they have a romantic past. Bobbi learns that Toshiro developed the weapon that he dubbed the splinter bomb and wants to work on the diviner. Bobbi also learns that the weapon is based on specs given by Whitehall but her cover is blown and Hunter and May come in to save her. Bobbi however isn’t happy that Hunter interfered and the two argue. May stops their bickering when they find out that Beckers is the next HYDRA target.

Coulson has tasked Simmons working on the hard drive to see what she can find out about the weapon. Simmons then turns to Fitz for his help. When Fitz struggles to find the words, Simmons tries to help but hinders. Fitz then asks Simmons why she went away when he needed her most and felt like she gave up on him. Simmons has no answers to Fitz and walks away. With the help of Mack, Fitz manages to find some useful intel and that is the splinter bomb is actually a weapon made in 1940 by a HYDRA scientists by the name of Vincent Beckers, Julian’s grand father.

Coulson realizes that this is all a trick to lure out SHIELD agents to believe they are heading a safe haven. We see Agent Walters enter a safe house in Bruges only to get killed by Scalotti on the orders of Beckers.

Hunter arrives at the safe house proclaiming allegiance to HYDRA and tells Scaliotti that he can lead them to two high ranking SHIELD agents and just needs 90 seconds for them to come. And crashing through the window is May and Bobbi. May goes after and eventually takes down Scaliotti while Bobbi and Hunter work together to take down the other HYDRA agents where Bobbi notes that Hunter has now saved her life three times.

In the aftermath, Hunter volunteers to leave SHIELD as to not butt heads with Bobbi but Bobbi tells him that she will be okay if he decides to stay. Talbot arrives at the safe house to take away the captured HYRDRA agents and learns from May that 6 SHIELD agents were killed. It seems that Talbot is open to working with SHIELD now.

Meanwhile, we see Senator Ward proclaim to the world in the same UN room at the beginning of the episode to admit that his brother is HYDRA and that he will be punished. His speech is interspersed with Ward being taken away with the agents like Trip, Fitz and Skye looking on. When Ward goes to speak to Skye, Simmons steps in front and threatens to kill Ward if he should ever approach Skye again.

While Ward is being transported, he breaks his fingers to get out of his handcuffs and takes down the SHIELD agents guarding him. Ward is now on the loose.

In the post credit scene, a unknown man (played by Cougar Town’s Brian Van Holt) enters a tattoo parlour to complete the full torso tattoo that the man has of the alien writing that Coulson and Garrett have been carving.

So Marvel fan’s, do we know who this man is? Let me know in the comments and Bobbi Morse is still awesome.