Picture it…Gotham City 10 years ago. We see a man repeating to himself in the mirror that he is the Spirit of the Goat before he puts on a mask. We see this man kidnap a young woman where we see Bullock and his then partner, Dix (Dan Hedeya) go to an abandoned building in Canary Park in pursuit of this man, Randall Milkey.

We see that Bullock is much like how Gordon is now. Very gun-ho and ready to pkay the hero despite Dix telling him not to but to wait for backup. When Bullock and Dix enter the building, they see the young woman strung across dead with candles surrounding her. Bullock and Dix see Milkey and Bullock goes after him. Dix falls through some scaffolding and his hurt but Bullock manages to shoot Milkey dead. Before Milkey dies, he keeps repeating that he can’t stop him and that the goat will always come back. 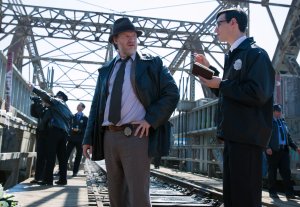 We flash to present day Gotham City and on the docks is a young woman strung across dead with candles around her. Bullock is reminded of the Spirit of the Goat case as Nygma tells him the time of death of the young woman, Amanda Hastings. Bullock also surmises that she is the first born daughter of one of Gotham’s one percent. Bullock is also surprised that Gordon isn’t with him at the crime scene.

In fact, Gordon is at Barbara’s resolving their differences where she pleads with him to let her share his burdens. Gordon promises that he will tell her everything. Later we see Montaya and Allen find a witness that tells them that he saw Gordon shoot Cobblepot. When Barbara goes to talk to Montaya about Gordon and pleads with her not to arrest Gordon, that they got it wrong, that she can help clear his name. But Montaya says that what Gordon has got himself into is dangerous and will get Barbara killed and tells her to leave town.

Back to the main case, Bullock and Gordon go to interview Amanda’s parents. Mr. Hastings doesn’t know who would want to hurt their daughter while Mrs. Hastings seems catatonic. Bullock notices that Mr. Hastings keeps clenching his fist but before we can ask any further, the Hastings’ shrink, Dr. Marks (Susan Misner) ushers them away. Dr. Marks answers Bullocks and Gordon’s questions about her role as the Hastings therapist but isn’t very helpful with their case.

At the autopsy, the ME says that Amanda died of asphyxiation but Bullock asks if there is a surgical score beneath her skull. The ME does see one and that it is covering a foreign object. Bullock knows what that object is: a penny. Bullock knows that this is no copy cat killer and very well could be Randall Milkey or at least someone who worked with him. Gordon wants to know how Bullock knows this. Bullock says that they never leaked out about a penny being found on all the victims and the original ME died and Bullock didn’t blab. The captain tells them to question Dix to see if he told anyone. Bullock and Gordon visit Dix in a long-term care facility. Dix says that he never said a word about the penny but believes that Milkey and now this killer are all part of a conspiracy. When Bullock leaves Gordon and Dix alone, Gordon is surprised to hear Dix calling Bullock a determined detective or something along those lines as Gordon thinks Bullock is a lazy detective.

We then see the Spirit of the Goat strike again and with the help of Nygma’s love of solving puzzles (where we see him drink from a coffee mug with a question mark on it), Gordon and Bullock find their man: Raymond Earle.

Nygma had a bit of a sub-plot in this episode as he goes to visit his crush at the Records Annex. Nygma is terrible at small talk as he keeps harping on the fact that this girl’s parents called Kristine knowing they have the last name of Kringle. Nygma also doesn’t further his case when he messes with how she organizes the files.

The Spirit of the Goat killer also worries Alfred. Alfred is concerned for Bruce’s safety as a first born but Bruce tells him he isn’t worried as the killer wouldn’t be interested in him as there is no one to take him away from. By the look of Alfred’s face, you know he wanted to say that the killer would take Bruce away from him but alas he doesn’t. Later at night, we see Selina break in to the study of Wayne Manor with a sleeping Bruce in the sofa. Selina observes Bruce’s evidence wall before stealing a silve box off of Bruce’s desk and escapes before anyone can arrive. I really hope that the show gives Selina more to do than slink around like a cat? Will she meet Bruce when they are kids or do we have to wait like 10 years for this happen?

Bullock and Gordon manage to track Earle to say same building as 10 years before. Once inside, Gordon finds the girl and cuts her down to safety. Earle and Bullock face off with Gordon joining in and taking Earle down.

In custody, Earle isn’t talking but the captain is pleased that Bullock and Gordon have caught the killer. But something isn’t sitting right with Bullock. Not wanting to discuss it further, Bullock tells Gordon to go home, which he does only to get arrested by MCU.

When Bullock notices that Earle is starting to clench his fists something clicks. Bullock goes back to the Hastings residence to talk to Dr. Marks. It seems that Dr. Marks performed some pro-bono hypnotherapy to Milkey and Earles that turned these men with no psychotic history of mental illness into killers. Marks did this to target Gotham’s elite to teach them a lesson. Marks then uses code words to get Mr. Hastings to attack Bullock. Bullock eventually wins and shoots Marks in the foot to prevent her from getting away. It was nice to have an episode where Bullock actually cared about being a cop and solving a case

In the world of the Penguin, Cobblepot goes to visit his mom and explains that he wasn’t with a woman but was betrayed and left for dead by those he thought he could trust. Cobblepot tells him mom that he is on the verge of becoming something big. As his mom cares for him, Cobblepot tells her that he has finally found someone he can trust and it happens to be a cop.

As the episode nears its end, Gordon is taken into custody denying killing Cobblepot, Bullock, thinking that this is all a cover-up for their mafia ties, says it is true that Gordon is innocent. Gordon tries to get Bullock to see that he is telling the truth but he isn’t quite getting it. So MCU decides to arrest Bullock too as he was seen at the docks Just when the two are about the booked and placed in jail, Cobblepot enters the precinct to introduce himself. Everyone’s jaw drops and Bullock realizes that Gordon really didn’t kill Cobblepot and he is pissed at him.

One huge saving grace of this episode is no Fish Mooney!

I am curious to know those that read my recap, are you loving Gotham or not. Let me know in the comments. For me, of all the comic book shows on TV now, it is my least favourite.