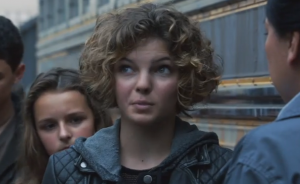 Despite the title of Gotham’s second episode, Selina Kyle doesn’t really make a true appearance/impact until about the 35 minute mark but when she does appear, Carmen Bicondova finally makes an impression of the future Catwoman.

But the action begins with Bruce Wayne putting his hand over an open flame as inches closer till he starts to burn the flesh off his palm. Alfred interrupts and yells at Bruce for what he has done but then comforts the boy.

In another part of Gotham, a whole bunch of homeless kids, which include Selina, who likes to be called Cat, are approached by a middle-aged couple, Patti (Lili Taylor) and Doug (Frank Whaley) who claim to be from the Mayor’s homeless outreach program. The two offer the kids some food, but Cat refuses. As the kids start to eat their food, Patti pulls put a pin and starts to stab the kids with some sort of drug.

Cat looks on in horror at what is happening and escapes. A homeless man tries to stop Patti and Doug but is shot and killed for his troubles. One kid, Mackie (Kyle Massey) manages to resist the drug and start to flee but Doug catches up to him and Mackie ends up through the window of a high class restaurant.

In the morning, Cat looks on as Jim Gordon looks over the dead body of the homeless man, who turns out to be a war vet. When a beat cop comes onto the scene, Gordon admonishes him for not preserving the crime scene but paid more attention the restaurant vandalism that involved one of the homeless youths The reason being is the cop is on the take by the restaurant. Gordon is growing frustrated at this and calls him a bad cop. Before things come to blows, Bullock stops them.

Back at the precinct, Mackie is being interrogated. Bullock believes that Mackie killed the homeless man despite Mackie accurately describing what happened to him and his friends. Bullock is so convinced that Mackie is lying that he threatens to beat the truth out of him. This causes Gordon and Bullock to come to blows. Bullock goes to Captain Essen and says that he can’t work with Gordon. Essen thought that Gordon was with the program (i.e. being on the take from Falcone) and Bullock assures her that he is. This is when Edward Nygma comes in to tell our cops that Mackie was telling the truth and that his blood work revealed that it was filled with a drug called ATP and it is associated with the now-closed Arkham Asylum. Of the course the future-Riddler revealed all of this as a riddle.

Considering the crime took place on Fish Mooney’s turf, Bullock and Gordon go to her club to speak to her about what she knows. And what she knows is that people are kidnapping kids for reasons unbeknownst to her.

Speaking of Mooney, she seems to be in deep s$%t with Falcone because of stuff that Cobblepot aka the Penguin has told him. Stuff like how the death of the Waynes will bring down Gotham and that Mooney is going to betray him. Mooney, however, does pledge her loyalty. Falcone is pleased to hear this but to get her to comply, he beats Mooney’s latest lover. Later, Mooney tells her right-hand man that she will bide her time and get rid of Falcone once and for all.

If we remember at the end of the “Pilot”, Cobblepot was saved from death by Gordon but everyone believes him to be dead. Montaya and Allen visit Cobblepot’s mom (Carol Kane) to see if she knows anything about her son’s disappearance, although the two Major Crimes cops, believe the corrupt cops from Gotham City PD killed him. Mrs. Cobblepot believes that her son is alive but has been lead astray from some woman.

We do see Cobblepot about 9 miles outside of Gotham City and is picked up by two college-aged boys. When one calls him a penguin, Cobblepot kills him with the beer bottle that he was handed and kidnaps the driver. Cobblepot rents a caravan and tries to extract some ransom from the driver’s mom but it seems that the mom doesn’t really care about her son. It is assumed that Cobblepot will kill this young man.

Later on Gordon shares his frustration over the kidnapped children case with Barbara. Barbara suggests she give the press an anonymous tip about this story but Gordon can’t so she decides to do it instead. When the story hits the paper, Essen is pissed and thinks that Bullock was the source, which he denies and then attention turns to Gordon, who likewise denies making the call to the Gotham Gazette. Gordon does tell Essen they got a break in the case and that only three companies manufacture ATP.

In one of these locations, Patti and Doug are discussing with the keeper of the children and little business. The owner of the drug company wants to stop everything now that the press has this story. But Patti tells this dude that the Dollmaker wouldn’t be pleased. Interesting that Gotham would introduce the Dollmaker as this was a villain used in Arrow last season. This business discussion is interrupted when Patti notices Gordon and Bullock come upon the business.

The owner dude rambles on but Gordon knows something is up and sure enough gun fire ensues but Patti and Doug escape. However, the children are saved.

At a press conference, Gotham’s mayor thanks Gordon and Bullock for saving the children and vows that all the homeless youth will be rounded up and given good homes.

However, in the privacy of Essen’s office, Gordon learns that the mayor wanted them rounded up because the homeless youth were the key reason why crime is up in Gotham. The mayor says that some will go into foster care but the hooligans are being sent to juvenile detention upstate.

And one of those youths is Cat, who refuses to not only give her name but get on the bus until she talks to Jim Gordon. However, Cat is ushered in but wishes she hadn’t as the bus gets hijacked by Patti and Doug. Cat tries to escape but Patti stops her.

The mayor is back at Essen’s office mad that a whole bus load of children were taken by the child snatchers. So Gordon and Bullock interrogate the drug store owner who eventually draws a logo that he saw on Patti and Doug’s van. Eventually, Gordon and Bullock figure out the company behind the logo.

As the bus arrives at a warehouse, the children are shoved into a container but they noticed one person is missing. It is Cat, who manages to elude Patti and make it off the bus. However, Patti gives chase again when one of her men comes back with his eyes gauged out.

When it looks like Patti has Cat cornered, Gordon comes in to save the day.

Later on at Wayne Manor, Gordon pays Bruce a visit at the behest of Alfred who has noticed that Bruce has gone all dark and twisty. Gordon wonders if Bruce has sought professional help but Alfred said that is what Thomas Wayne would want. Alfred says that he is to raise Bruce in way that lets him make his own choices.

Back at the precinct, Cat is about to be taken to juvenile detention again but manages to speak to Gordon. Cat wants to be sure that she won’t be sent to juvvie if she reveals information that she has concerning Bruce. Gordon will see what he can do and this is when Cat reveals that she saw clearly who killed the Waynes.

So ends episode 2 of Gotham. It was a bit better than the pilot where there wasn’t an endless parade of future villains but the Riddler needs to have more screen time to see how he will evolve as a villain. However, I think that will be for a future season. And it will be a while before we see Catwoman become a villain to considering that she is only 13 years old.

I am liking the Bruce Wayne stuff and will be interested to see his relationship with Gordon blossom and grow. And you can see that David Mazouz and Carmen Bicondova definitely aged a bit since the “Pilot”.

Next week’s episode is entitled “The Balloonman”. Is that a DC Comics villain? Let me know in the comments or I can just Wikipedia it.