In probably one of the highly anticipated panels at San Diego Comic Con 2014 aside from the Marvel film one was the Marvel television one.

While the panel was light on showing anything new, it sure wasn’t light on news. First up was Agent Carter and here is what we learned:

Nothing new was shown as the show only just started filming this past Thursday but we got shown a pretty funny blooper reel, which you can see over at Entertainment Weekly. 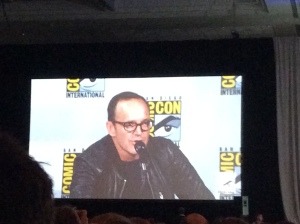 Here are some tibits that we learned: