It is the penultimate episode of Orphan Black’s second season and we see Rachel make her move along with Proletheans on Helena. Plus we see Donnie and Alison get closer.

How Donnie and Alison become closer is all around disposing of Dr. Leekie’s body. First up is to Alison thoroughly cleaning Donnie’s car followed by the two of them properly wrapping up Leekie’s body and then dumping it in their chest freezer where Alison and Donnie promptly put food back on top of him. Eew gross.

After a teleconference with Sarah and Cosima where Alison is saddened by Cosima’s ill health, she learns from Sarah that Leekie’s death is being blamed by a heart attack on board of a Dyad plane. Donnie, who was listening in on the call, knows that it is a lie and wonders why the Dyad would cover up this death but Alison is not surprised. Donnie tries to come up with ways to get rid of the body permanently like burying it in the backyard. This gives Alison another idea. We then see Donnie attempt to jack hammer a hole in the garage but it is Alison who is more successful. As the couple are digging a hole. their kids come in to say a man is there to visit them.

When the whole Hendrix clan arrive to the basement, it is Vic. After ushering the kids upstairs, Vic says that he wanted to clear the air with Alison but Alison and Donnie kick him out. Vic promptly enters a van just outside the Hendrix residence.

While Alison puts the finishing touches on Leekie’s final resting spot, we see Vic try to see what is going on in the garage. Unfortunately for Vic, Donnie comes up behind him putting a gun behind his head. After threatening Vic, he comes clean and says that Deangelis is outside wanting some scoop on Alison as she believes there are five of her. Donnie claims there are 11 of her. Eventually, Donnie goes to the van with Vic in tow and warns Deangelis off and tells her the scram. Doing this has given Donnie a new found confidence. 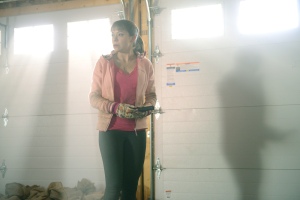 We then see Donnie and Alison finish burying Leekie. In the wet concrete, Donnie draws a heart. This turns on Alison and the two proceed to have sex on the chest freezer.

We see Henrik implant Helena with her eggs and the midwife, Alexis in this scene is played by Tatiana Maslany’s acting double, Katherine Alexandre. After the procedure, Alexis then takes Helena to see the compound’s daycare. Helena soon bonds with a young girl there. After story time with Henrik, Alexis is a little rough with this little girl and Helena in turn is rough with Alexis.

Later we see Henrik and Mark talk about Mark’s feelings for Gracie. Henrik blesses Mark as a husband for Gracie but says it is time that she start to bear fruit. We then see Henrik do the same procedure he did on Helena to Gracie. As Gracie recovers, she tells Helena that she is carrying her babies and that Henrik is the father. Later that night, Helena decides to leave the Prolethean compound and Gracie wants to go too but there are stop by Henrik. Henrik knocks out Helena with a butt of a rifle and locks up Gracie. Mark sees Gracie locked up and wants to help her but Henrik says that she deserves to be punished. Mark stands up to Henrik just as Helena puts him a choke hold. This lets Gracie and Mark escape.

Sarah’s storyline this week is all about her decision let Kira’s bone marrow be extracted. But this only happens after Kira agrees to this procedure to help out her Auntie Cosima.

Mrs. S knows a pediatric doctor who can do the procedure secret. Delphine is brought into the operating room to observe the procedure but only after getting the all clear from Mrs. S bodyguard Benjamin. More the aftermath of Kira’s surgery in the Cosima/Rachel section.

Delphine tells Rachel that the growth in Cosima’s uterus has spread. Rachel says that Cosima’s only hope right now is Kira’s bone marrow as they will probably have to wait awhile for Duncan’s research to bear fruit.

Rachel then appoints Delphine the new director of the Dyad because she has the business sense and the science sense for it. Meanwhile, Scott is helping Duncan get the old computer set up and decrypt the DNA sequence that causes infertility. Duncan and Cosima have a conversation as to the reasoning why Duncan decided to make the clones infertile. When the code gets decrypted, Duncan tells Cosima he is ready to right his wrong.

Rachel meets up with Marion to say that she is all good and is up to the task. Marion’s visit to Rachel is more of a personal one where Marion states her fascination with Sarah Mannine.

Later on we see Rachel enter a dark room where Rachel tearfully observes the home video of her with her parents while sipping a martini. Then Rachel views still photos of Sarah and Kira. During this scene, we see Rachel remove her suit jacket and then don and jacket that something Sarah would wear. Methinks we have an impersonation coming up.

When Delphine returns from Kira’s procedure, Rachel concedes Leekie’s office to her. When Rachel steps away to take a phone call, up pops an email on Rachel’s computer about how Benjamin has been compromised to work for Dyad.

This leads Delphine to meet with Sarah, who has left a recovering Kira and a sleeping Felix. Delphine tells Sarah about what she saw about Benjamin and warns her not to tip Benjamin off about this. The next time we see Sarah, she says that Rachel is on to them. Sarah then enter’s KIra’s room and starts to move her when Felix wakes and wonders what is happening. Sarah tells Felix that they aren’t safe but he then gets a call on the clone cell and it is from Sarah. This is when Felix realizes it is Rachel pretending to be Sarah. Rachel then drugs Felix and gets away with Kira.

The real Sarah then comes back to the hospital and yells at Benjamin for his betrayal. This is when Mrs. S believes they’ve been played by Rachel.

We then see Delphine at Cosima’s bedside where the later wonders what is wrong. Delphine tells Cosima that she has done something terrible. Obviously, Delphine was meant to see that email and was told to warn Sarah about this.

Meanwhile, we see Kira wake up in a very girly bedroom with Rachel there too. Rachel tells Kira that she will be happy there just as she was. So Rachel has put Kira in the same room at the Dyad that she grew up in.

So what do we think is going to happen in the season finale? Will Cosima die? Is Rachel really going to turn herself in to Dyad? And will we see Paul next week? Let me know your thoughts in the comments.