The following recap and review contains spoilers for season 3, episode 9 of Continuum which won’t air in the US on SyFy until Friday. If you don’t want to know what happens then stop reading now, if you do then please read on.

It is 2077 and a doctor (Bob Fraser) arrives from a fancy fundraiser to his clinic. This doctor runs a citizenship extraction clinic that pretty much is all about removing a chip in one’s arm thus revoking their birth certificate and citizenship thus leaving them with no ID. Also at the clinic is Kiera who is the next person ready to go through the procedure.

In the present day, a John Doe (Ryan Robbins) has woken up from a coma after being hit by a truck. John Doe has amnesia and the only name that comes to mind is Kiera’s.

Back at the precinct, Dillon and Carlos (in their ceremonial uniforms) and Kiera have returned from Betty’s funeral. As Carlos stares at Betty’s empty office, he decides to march into Dillon’s office (despite Kiera warning him not to) and demands that Dillon be the one that investigates Betty’s murder. But Carlos’ realizes that Dillon is letting integrated homicide take care of it in exchange for them keeping silent on Betty being a Liber8 member. Dillon then forces Carlos and Kiera to take the rest of the day off.

Kiera gets a call about the John Doe. When she arrives at the long term care facility, the doctor there was hoping Kiera would know who John is but her CMR can’t ID him. Because John is healthy aside from the bum right knee, he has to go as his bed is needed. So Kiera is forced to care for John.

Carlos is using his time off to meet with Alec, who tells Carlos of his woes at Piron. But what Carlos wanted to meet with Alec with is to show him something as he is the only person that can understand. Carlos takes Alec to the freezer where he stashing the dead Kiera’s body. Alec is shocked at seeing this Kiera and is pissed at the other Kiera for lying to him.

When Kiera calls Alec to see how someone can have no trace of an ID, Alec is aloof and gives a short answer and then promptly hangs up on her. 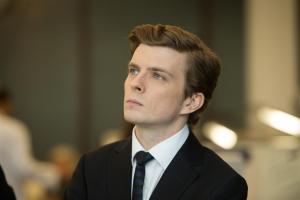 Alec has troubles of his own as Kellogg has slapped him with a lawsuit claiming breach of contract for breaking the non-compete clause by going to work for Piron. Kellogg says that 49% of what Alec comes up with belongs to him. Adding to Alec’s troubles is that his Halo project isn’t going well. Jason tells his dad that Halo will only work if there is a plastic strip connected behind someone’s head but that isn’t what Alec wants. Alec also notices that two of his techs aren’t present and Jason mentions that they jumped ship to Sadtech and Alec blames Kellogg. Alec’s lawyer isn’t pleased with the lawsuit but Alec promises that he will take care of this. Jason keeps on piling the bad news to Alec and tells him the tech to make Halo truly work won’t be available for another 9-10 years.

Meanwhile, we are treated to a heist of Hyper Stealth were we see a pretty nimble thief break in avoiding all security to steal what we later see is a invisibility cloak. Carlos and Kiera are alerted to case and learn other high tech toys have been stolen too.

Back to Kiera and John Doe, Kiera found a hotel key card among his possessions and it is for a hotel that was paid off for three months in advance. Taking John to the room doesn’t jog anything. We see amongst John’s possessions are sci-fi books, one called 2077. Kiera notices numbers on John’s arm and her CMR determines it is GPS coordinates. When they arrive at the location, John still doesn’t remember anything. When Kiera is alerted to a theft at Piron (the same thief used the invisibility cloak to steal a Halo device), she wants to leave John as she feels she can no longer help him. However, John starts to get a memory of Vancouver but not of this time as he starts talking of a military operation and a city in ruins. This is when Kiera realizes that John Doe is from the future.

At Piron, Carlos and Kiera question Alec about the theft and wonder if he has any enemies. Alec is quite short with Kiera but is more forthcoming with Carlos when he asks about outsourcing some of Halo’s research. We learn that some of the tech for Halo and the invisibility cloak were outsourced to WCIT. Outside of Piron, Kiera mentions Alec’s attitude and suggests that maybe Alec staged the theft to throw off suspicion that he may be responsible for the other thefts. So Alec is brought into questioning by Dillon and Carlos. Alec offers a different thing to ponder and suggests that the thieves are into high tech stuff and that the VPD has been hacked. We see Nealon observing this interrogation via Dillon’s computer camera and we see Dillon cover the camera with a business card.

And Alec did take care of Kellogg by offering to absorb Sadtech effectively leading Kellogg to now work for and report to Alec.

As Carlos is leaving for the night, he notices the computers in Betty’s office come on with one screen flashing a ?. When Carlos’ goes in, the phone rings and it is Lucas. Lucas offers some information that will help Carlos catch Betty’s killer as he too wants some justice.

Back at John’s hotel room, Kiera and John bond over the feeling of not being in the right time. Kiera pretty much says but not outright that she has travelled back in time and felt out of place. But a friend helped her out and Kiera feels a sense of purpose now in the present day. Kiera then offers John her couch for three days and the two share some flirty chemistry that makes me think that these two are so gonna hook up. As the two leave the hotel, who should arrive but Curtis. Once he sees Kiera the two engage in a fight and Curtis throws Kiera through a glass window and she is done for the count. But John ends up joining the fight and gets Curtis to flee. Was Curtis there for John? Is John perhaps the mysterious man that the Freelancers have but managed to escape? We will soon find out.

When Kiera comes to, Carlos is there as he called her cell and John let him know what happened. Kiera notices that John’s knee is now healed and she determines that it is future tech that allowed him to heal so fast when adrenaline kicks in. This tech was built for the military.

Carlos then gets a call about Greypoint Security and on the ride over, Kiera realizes that Carlos has sided with Lucas to help bring down Betty’s killer. Carlos says that it is the only way to get Dillon to listen if they present his face with cold-hard facts. When the two arrive at Greypoint Security, they see tons of screens observing what is happening at the VPD. Kiera notices with her CMR a thief at Greypoint and they capture him, the same one that we’ve seen throughout the episode. The thief coughs up Nealon and we see Nealon being questioned by Dillon and Carlos.

Nealon isn’t forthcoming about who hired him to do the Fermantos gassing, etc… and this displeases Dillon.

At Kiera’s condo, as John is settling in, she rummages through is bag and finds a device no bigger than car fob. When Kiera presses some buttons a hologram appears of John and his family. John appears by her side wondering who exactly is he.

We return to 2077 and as Kiera goes to take her turn for citizenship extraction, she pulls out her gun and arrests the clinic doctor and nurse for running an illegal clinic. When questioning the doctor about why he is running such a clinic, he replies that it is better to have no ID than have the Corporate Congress run their lives. A fellow officer wants Kiera to arrest everyone in the clinic despite her protests. Kiera naively doesn’t understand why anyone wants to give up their citizenship.

When we return to the present, we see Alec go to Carlos’ secret freezer and goes to dead Kiera’s body. At this point, we realize that Alec is going to harvest the tech in this Kiera’s body in order to make his Halo project work.

I am intrigued by this John Doe. He is very charismatic and definitely shares some chemistry with Kiera so we will see how this relationship develop.

And as we see from next week’s episode, dead Kiera’s body is gone but did Alec take it? Guess we will find out.