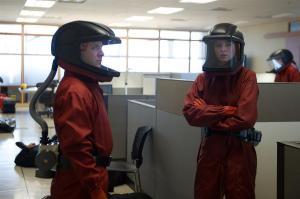 The following recap and review contains spoilers for season 3 of Continuum which premiered in the U.S. on April 4 thus are a few episodes behind.

We open in 2077 and we see Kiera and a squad of CPS officers invade a Sonmantos building to stop a political rally. However, the leader says it is just a protest to protect a heritage building. Also at this meeting is Kiera mom. Kiera tries to get her to leave so she won’t get arrested but her mom is staying and she was at this meeting to standup for what she believes in. In fact, Kiera’s mom is a bit disappointed in her daughter in siding with the corporations and sees it as an act of rebellion against her. Kiera mom is then taken into custody.

As we see 2077 Vancouver transform to present day Vancouver, Kiera is on the balcony of her pretty nice looking condo. Her revelry is interrupted when Kiera watches a debate between Dillon and Julian on Firepoint about Piron’s private security force coming and helping the VPD. Dillon is pro while Julian is con on the topic.

We are at a Fermitas board meeting where the chair is talking about how they can be better in order to compete with Sonmantos. All of sudden, gas starts filtering in the room and building are coughing. Everyone tries to flee but finds all the doors are electronically locked and won’t open. Everyone in the room collapses to the floor dead. Kiera is then alerted to what has happened.

When Kiera arrives, in a Hazmat suit, at Fermitas, Dillon is there. They find that the roof of the building has been rigged with a laptop to control the doors and certain vents that would release the gas into the boardroom. Dillon believes it is Liber8 and tells Kiera that he is her partner on this case has Carlos has been assigned a Sonmanto whistleblower case.

At the police station, Betty gives Carlos some information about the whistleblower case. It seems the whistleblower, Adele Martin (I think that was her last name), actually went to Julian with her information. Later we see Carlos confront Julian and he later arranges a meeting between Carlos and Adele. We see this meeting where Adele tells her side of the story and Julian shares with Carlos all the criminal activity Sonmantos has done. With this information, Diane Bolt, goes on the air with all this information and even interviews Adele anonymously.

As we see Adele watch the news report, Carlos drops by with some dinner and the two proceed to have sex.

However, all of this was a lie as Sonmantos meant for Adele to find all of this information and blow the whistle. Adele was following Sonmantos’ orders to do so. Lawsuits are threatened against Diane Bolt and the station and Julian has lost his job as a talking head. Julian then calls Carlos to say that everything that Adele had on Sonmanto was a lie. Carlos goes to talk to Adele who says that what she did was part of her job.

Later, Garza confronts Julian and pretty much tells him he needs to toughen up in order to stand up for what he believes in and tells him to get into the car.

I mention all this whistleblower stuff first because it has to do with the main plot with Kiera. Before I get to that, let us check in with Alec.

Alec presented to his board a piece of wearable technology a sort of Fitbit bracelet called Halo that is pretty much a doctor on your wrist. Alec gets one of the skeptical board members to wear it and starts to read his health stats. What convinces the board to throw research money behind Halo is that Alec said the device detected that board member had colon cancer. The board, including Dillon, votes that Alec be given 60 days and all the resources to make Halo a reality. But back in Alec’s office, Dillon calls him out on how Halo doesn’t really work. Alec confesses he found out about that board members cancer by reading his insurance file. Alec does say that Halo is very close to becoming a reality.

Meanwhile, Kellogg has found Jason sleeping under one of the tables in Alec’s lab. Kellogg convinces Jason to ditch Sadtech and join his father at Piron. Kellogg gives him and suit and we see that Jason does scrub up pretty nicely. Kellogg also switches out his sunglasses with a new pair of spectacles.

Speaking of Kellogg, Curtis pays him a visit while he is having lunch and scares the s*&t out of him Kellogg worries that Curtis wants revenge for setting him up to be killed. But Curtis needs someone of Kellogg’s unique skill sets for help and also will tell how he was able to cheat death so he can too.

Jason does end up visiting his dad Alec at Piron and tells Alec he scrubbed up so he wouldn’t embarrass him. Jason sees the Halo bracelet and talks about it. Jason mentions how it helped save Alec from three heart attacks. Alec realizes that it was fully operational in Jason’s time and was hoping he brought one with him but alas no. However, Alec does put Jason in charge of the project and we also see Kellogg watching this exchange happen via Jason’s glasses.

Back to the VPD, Betty is tasked with reaching out to Lucas to see if Liber8 was involved in the Fermitas gas attack. Kiera also asks Betty to look out and track Curtis, whom Betty calls the dead Liber8 guy. Betty agrees to help Kiera out. Also, Alec tells Kiera it is hard to know for sure that Liber8 is responsible for the gas attack.

Betty was able to find out who planted the laptop that controlled the Fermitas building controls; it is guy who goes by the name of Elton. When the police go Elton’s address, we see another man, Neelon (Curtis Caravaggio) observing from afar. Before the police can make it into Elton’s, it blows up and Kiera notices Elton arriving home but flees when the explosion happens. Kiera uses her future gun and knocks Elton down.

During Elton’s interrogation, he insists that he isn’t part of Liber8. But Dillon is quite insistent on a connection and starts listing the full names of Liber8 members to jog Elton’s memory. We can tell from Kiera’s face that she finds this highly suspect. When Elton claims that some of those names are familiar, Kiera accuses Dillon of leading the witness. Dillon is quite stubborn in insisting that Liber8 is responsible for the gas attack.

Betty once again comes through for the team and is in a chat with Lucas. Lucas wants Betty to find a connection between Dillon, Sonmanto and Fermitas. Dillon is feeding Betty what to say to Lucas and Kiera is trying to understand Liber8’s motives. But Lucas tells Betty never mind indicating that they got the information they need.

Later, Betty tells Kiera that some Liber8 chatter indicates that they want to recruit someone out of a prison in Maple Ridge. Kiera realizes that is where Dillon’s daughter is and tells Dillon this, who doesn’t flinch at the news.

Meanwhile, Garza goes to confront Neelon. They two have a pretty big brawl where the upper hand changes quite a bit. We also see bystanders video taping all of this. Neelon and Garza end up just going their separate ways.

Next time we see Neelon he is at the VPD being questioned about his fight with Garza, who has left him with a pretty bad black eye. Kiera, using her CMR, denotes that Neelon is ex-Navy Seal. When both Dillon and Kiera are distracted, we see Neelon plant a listening device at Kiera’s desk.

When Kiera returns home, Garza is there to tell her that Liber8 wasn’t responsible for the gas attack and claims the left what they stole from Sonmanto behind. Kiera and Garza decide to work together and see who is trying to frame Liber8.

Another proof of the framing is a supposed Liber8 manifesto on the attack. Betty believes it isn’t LIber8 since it sloppily written and Sonya would never write something like that. Kiera agrees. Betty also discovers that Neelon works for a company called GreyPoint security that is owned by Sonmanto. Betty realizes that Kiera having some misgivings of the VPD and while wanting to get back in Dillon’s good graces continues to help Kiera. What has added to Kiera’s misgivings is she sees Piron asserting its presence at the VPD.

Alec later tells Carlos and Kiera that Sonmanto has been trying to buy Fermatas but the latter company wouldn’t budge on the stock price. But since the attack, Fermatas’ stock prices has plummeted and presumably allowing Sonmantos to swoop in.

Late at night, Kiera and Carlos are going through the connection between his whistleblowing case and the attack on Fermatas. Kiera and Carlos also deduce that Dillon separated them because he knew that Kiera would be able to tell that Adele was lying. When Carlos and Kiera present their theory to Dillon, he once again is holding fast at blaming Liber8.

A frustrated Kiera, Carlos and Betty (who has gotten her ankle bracelet removed) go for drinks. All are wondering what is up with Dillon and Betty admits that he has tunnel vision when it comes to Liber8. Betty wants to help them and then leaves to go to her meeting with Elton. As Betty meets with Elton, we see Neelon drive by slowly and shoots Elton dead. When Betty tries to make a run for it, Neelon shoots her several times in the back. Kiera and Carlos hear this from inside the bar and rush out to find Betty dead.

And too bad just when Betty was starting to prove herself again. I always felt the show under utilized Jennifer Spence and when Betty finally started to get interesting back making her a mole for Liber8, it was forgotten for a bit until this season. I enjoyed that Betty was front and centre this episode but I feel now Kiera has lost a pretty good hacker that is on her side. I don’t think Kiera can rely on Alec especially at any moment it looks like he will betray her.

Will you miss Betty? Who is Neelon working for? Let me know in the comments.

Also, we get a break from Continuum next week as it is the Victoria Day long weekend. So until two weeks.