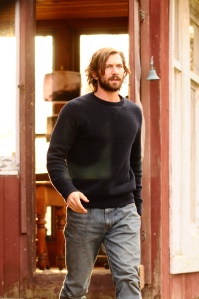 This week we meet a new clone, see Sarah reconnect with someone from her past and Alison’s life starting to unravel.

Before we get to what the clones were up to let us start with Art.

Art comes home to find Angie there. Art is livid that Angie went behind his back to find out about Helena. Angie tells Art that someone checked Helena out of the hospital. Art then tells Angie to drop her investigation into Helena and everything that surrounds her (i.e. her clone sisters).

We later see Art arrive at the Prolethean’s ranch and take some covert pictures of Henrik, Mark and Gracie.

Now lets get to the clones starting with

Alison is quite high strung after finding out her husband Donnie is her monitor. Donnie thinks she is stressed out about the play and tries to relax her but Alison is having none of this.

At the dress rehearsal, things are going well for Alison. After rehearsal in the community center parking lot, Alison is approached by Angie in the guise of a newcomer to the neighbourhood. Angie asks to use Alison’s phone to call her husband as she locked herself out of her car. Alison doesn’t quite buy Angie’s story and doesn’t accept her offer of coffee.

Alison immediately calls Cosima to tell her that she has another monitor on her tail (i.e. Angie). Alison doesn’t have Felix and Sarah anymore and says it is up ot her and Cosima to hold the fort. Cosima doesn’t have the time to reassure her clone sister but just tells her to keep working on Donnie to probably get him to crack.

It is opening night of Blood Ties The Musical and just before entering the theatre, Angie approaches Alison again. This time Alison says that she knows who Angie is. This prompts Angie to fess up that she is a cop and starts mentioning Beth and Sarah to Alison. Steely-eyed as ever, Alison warns Angie to leave her alone.

The director gives the cast a pep talk and dedicates the show to Aynsley. While we see the director give his speech, we see images of Alison popping pills and sipping from tiny bottles of vodka.

It is show time and the musical isn’t quite going well. As Alison makes her way upstage, she actually slips and falls off stage. We then see Donnie ask for an ambulance to be called as we see Alison flat on her face in front of the stage.

Delphine has brought Cosima to Dr. Leekie’s office to show her a video diary of one Jennifer Fitzsimmons, a swim coach and high school teacher. Jennifer is another clone and she has the same respiratory disease that Katiya had and Cosima has. Delphine tells Cosima that Jennifer died three days ago

From watching the videos, we see Jennifer get excited over being accepted into a treatment program from the Dyad Institute headed by Dr. Leekie. By her side is her boyfriend, Mark. The next video shows a deteriorated Jennifer who proclaims the treatments are working. We see that Jennifer has lost her hair but Mark is still by her side. Cosima deduces that Mark was Jennifer’s monitor.

We later see Delphine and Cosima perform an autopsy on Jennifer. Delphine keeps on asking if Cosima is good at seeing pretty much herself on the table. Cosima insists that she is okay. While performing the autopsy, Cosima gets a coughing fit and later Alison calls Cosima (see above).

Also, Cosima notes things on Jennifer’s body and she and Delphine tries to figure out what is wrong with Jennifer. Delphine notes some polyps or tumours in Jennifer’s uterus. Both women deduce that this perhaps is a cause of the clone’s infertility.

Helena is still recovering with the Proletheans. The basic premise of her storyline tonight is that Henrik wants his daughter, Gracie, to accept Helena as being part of their family and not see her as some abhorrence for being a clone. As we near episode end, we see Henrik and the rest of the Proletheans dressed all in white to perform some sort of ceremony welcoming Helena to the family. We then see Henrik carry Helena, who is in a white lace dress, down a hallway.

We see Daniel come to the hideout that Sarah just vacated. Daniel sees the dead body of Barry and Brenda and also the fake passports that Mrs. S was making. Daniel quickly hides when he notices the Proletheans arrive (I am pretty sure that he doesn’t know who they are). We see Henrik and Mark dispose of Barry and Brenda’s bodies and then torches the place. From a far, Daniel sees all this while holding on to Kira’s passport photo.

Meanwhile, Sarah, Kira and Felix has spent the night in the stolen pickup truck. Felix and Sarah discuss how they didn’t know that Mrs. S had that side in her. That side being the one that can kill.

There is a problem though, all three are hungry and Felix can’t use his Visa as Kira points out that they can be traced that way. So using Kira as a distraction, Felix shoplifts food for them at a roadside convenience store. Sarah later tells KIra that what they did was wrong and only did because they had to.

In the woods, Sarah realizes that they are near some cabins that people use for the summer and should break into one of them so that Kira can have a bed to sleep in. After abandoning the truck, Sarah, Felix and Kira make their way to this cabin and start settling in.

We later see a local cop, Tom (Zachary Bennett) find the pickup and run the VIN as Sarah has removed the plates. If you are wondering why the cop looks familiar then that means you were a fan of the CBC TV show Road to Avonlea that aired in the 90s. The show starred a very young Sarah Polley and Bennett played Felix King on the show.

End of side note.

But the trio’s moment of peace is broken when the cabin’s owner returns. It is clear to Felix that Sarah knows him. Apparently, Cal (Michiel Huisman) was a past con of Sarah’s and also Kira’s father after the little girl straight and asks him that question.

Sarah explains to Kira a little bit about her parentless past and the reason why she brought her to Cal was so that she could know her father. Cal, by the way, developed some sort of bee technology but he was bought out and that tech was re-purposed as a military weapon.

Felix isn’t happy at being lied at from his foster sister. In fact this is the first time that we see Felix and Sarah come to blows that results in him leaving. We later see Felix at Alison’s play.

At first Cal isn’t happy at Sarah’s return but covers for Sarah out when Tom comes out his cabin asking questions about the shoplifting and abandoned truck. After Tom leaves, Sarah wants to make a run for it but Cal convinces her to stay and the two then have sex.

We also see Daniel investigate the shoplifting and from the clerk knows that he is on the right track.

The next day, the newly reunited family is enjoying some time together playing cards. Kira then goes out to feed Cal’s chickens but Daniel is there and makes a play for Kira, who then shouts for her mommy.

Sarah hears her cries and goes out to find that Daniel has Kira and is holding a gun. Daniel wants Sarah and Kira to come with him. But Sarah manages to subdue Daniel enough so that Kira can escape to Cal who threatens Daniel with a shotgun. Sarah insists that Daniel take her so he does just that. While searching Sarah for any weapons, he finds the Project Leda photo. As Sarah is driving them to who knows where, Daniel questions her on Project Leda but before any answers can be given, BAM! Sarah and Daniel get hit by a truck.

So where was Daniel taking Sarah? My bet is obviously to Rachel, who was MIA this week as was Paul. Hopefully, he returns next week.