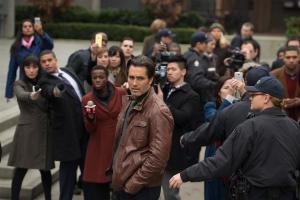 The following recap and review contains spoilers for season 3 of Continuum which premiered in the U.S. on April 4 thus are a few episodes behind.

I think this week’s episode resolves the problem of two Alec’s in one timeline but not before we see Kiera taking a bit of advantage of having two Sadlers at her disposal.

But before we get to that, we open in 2077 and we are in warehouse filled with beds of very sick people who have veins along their face. People are dying or have died from whatever ails them. Among them is Kiera who is in so much pain that she wants to kill herself and asks her caregiver to seek her family’s forgiveness. But the caregives tells her not to go through with it as a cure has come and the cure is provided to you by Sonmanto.

Back to the present, Sadler is helping Kiera find out who killed the other her. Sadler then informs Kiera that he plans on skipping town with Emily.

But skipping town is a bit problematic for the two as Alec has frozen their accounts and is holding Emily’s violent past against her. The only way to get out of town is to make a deal with Kellogg. Emily is against that idea but there is not a better one. Before they leave, Emily begs Sadler to go to Piron to get rid of her file that prevents her from fleeing.

At Piron, Emily confronts Alec and gives him and his bodyguard a beat down. It was all so that Emily can grab Alec’s security guard. Sadler manages to get Alec to leave on a fool’s errand and poses as his past self to gain entry to Piron to wipe Emily’s file off. However, Alec suspects something is up when he can access one of Piron’s servers and goes back. More on this later as it ties into the other storyline in the episode.

Kiera has gone to Catherine, whom we saw emerge from that secret room after interrogating a man that seems to making no sense to them. Who is this guy? Any guesses? Let me know in the comments. Catherine tells Kiera that she needs to make a choice with the Alec situation in order to balance the time line. Kiera thinks that this will end in violence but Catherine says that it doesn’t.

Roger Cross as Travis and Lexa Doig as Sonja

We then see Liber8 break into a Sonmanto chemical plant fairly easily to steal some chemical waste. The next day when kiera and Carlos go to investigate, the Sonmantos spokesperson, Richardson, denies anything was stolen. Kiera mentions to Carlos how Sonmantos developed a cure for a chemical weapon that was used against her back in her time. On the tour of the plant, Kiera notes the chemical that was stolen and contacts Alec for help. At first Alec ignores her call but once chemical waste and Liber8 are factored in, he answers her call. Alec determines that Liber8 could make a biohazard weapon if mixed with common household ingredients. Kiera asks Alec to find a cure for the weapon. Alec sets his Piron people on it.

We see Liber8’s Sonja, Travis and Lucas making the weapon in a warehouse. Kiera uses Sadler to help determine where Liber8 stole the truck that helped them get the waste. Sadler realizes that Kiera has also called Alec for help and says that two Alec’s are better than one. Carlos reams Betty out for not having that information that Sadler easily found. Betty snaps at Carlos’ accusation that she is helping Liber8 still. But Betty calms down and gives the VPD the location of the warehouse.

There is a showdown that results in a lot of bad guy dead bodies and one guy who uses the weapon on himself. Kiera is caught in the crossfire but she is okay and later determines it was because she was immunized in her time against this weapon. Kiera comes to this conclusion after taking a look at the veins on the dead Liber8 member’s face.

At Sonmantos’ headquarters, there is a truck parked there with the chemical waste. Liber8’s lawyer, spews what Sonmanto is up to the media present, Kiera takes him away before he can say any more. Carlos realizes that Liber8 stole some really important espionage that Sonmanto has on its competitors in the safety deposit heists a few episodes ago.

Remember when Emily took Alec’s security card so Sadler can break in and get Emily’s file. Weill that proves tougher as Alec as it encrypted and Alec enters his office where Sadler knocks him cold. Kiera calls Alec and Sadler picks up. Kiera needs Alec’s help in finding out files were stolen from Sonmanto. Sadler at first doesn’t want to help but when he sees the files that Piron has on Sonmanto it is pretty damaging. Sadler sends the files to Carlos and Kiera. Alec wakes up and confronts Sadler with Kiera listening in. Kiera goes to deal with it while Carlos confronts Richardson about Sonmanto’s dealing with terrorists groups in the Middle East and also that Sonmanto knew that their chemical waste could be weaponized. Carlos takes Richardson away. At the VPD, Dillon says that Richardson is admitting nothing and because of Carlos’ actions, Dillon is confining him to desk duty to which Carlos is none to happy.

Back at Piron, it is a showdown between Alecs. Sadler notes that Alec is still in love with Emily and encrypting her file proves it. Sadler pulls a gun on Alec to get him to wipe Emily’s file clean and just when it looks like Sadler is going to kill Alec, Kiera comes in. The two then point the finger at each other playing the blame game so Kiera stuns Sadler and tells Alec that he has always been on her side. Meanwhile, we see Emily waiting for Sadler at a bus station and when she realizes he won’t show, she leaves.

Meanwhile, we see Sonja draw some blood from Travis. Travis was injected with the cure from Sonmantos’ bioweapon so Sonja is going to use the antibodies in Travis’ blood to develop a cure well before Sonmantos will.

Kiera has taken Sadler to Catherine and the Freelancers and he placed in the same glass cage as she was in the season premiere. Sadler yells Kiera’s name from his cell.

Kiera believes that all should be well now and that Sadler didn’t want to become the evil 2077 Sadler. Kiera gives Catherine a portion of the time device when Curtis comes on and says they need to find the other time device. While they are discussing what to do with Sadler and next steps, the surveillance footage from Alec’s lab has finished rendering and is sent to Kiera’s suit. Kiera sees that it is Curtis that killed the other her and believes that Catherine and the Freelancers are against her. But it is clear that Catherine had no clue and Curtis was working by himself. Kiera is ready to shoot Curtis dead as we end the episode.