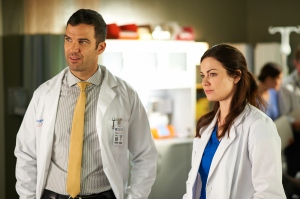 At the start of the episode we see Charlie at the morgue making sure that he truly can’t see spirits. Once he confirms this, Charlie goes to Alex to say that he wants to meet up with her later to tell her something important. Alex agrees then goes off to her ER consult.

Alex’s case is Mimi, an older woman with stomach pains. Mimi comments on how beautiful Alex looks, which becomes important later on. When some other patients disturb Alex’s examination, Mimi seems to be suffering a panic attack.

When Zach goes to try and comfort Mimi, Zach gets a punch in the stomach for his troubles and also something he can’t live down.

Mimi is admitted and Alex has called in Gavin for a psych consult but he can’t determine anything mentally wrong with her. We learn that Mimi had recently lost her husband and her son died 10 years ago.

When Shahir is called in to see if Mimi had a stroke, this also turns out negative. When a neighbour of Mimi, Claire, visits her, Mimi has another attack. Dawn is called in and determines that Mimi needs a pace maker.

During the surgery, Dawn talks about the love triangle that Alex is in with Joel and Charlie. Alex insists that Joel and she are just friends. Dawn thinks that Alex should choose Joel to be with. This seems to be Dawn’s veiled attempt for Alex to give Charlie up so she can swoop in. During the surgery, Alex realizes that what could be wrong with Mimi could be with her adrenal gland but they can’t determine that until she has another attack.

Mimi’s pace maker surgery is a success but when she wakes up, she thinks it is 1985. Claire comes to visit Mimi and it is very clear that these two had some sort of romantic relationship. When Mimi asks for a kiss from Claire, she gets another attack. This allows Alex to do some blood work which confirms that Mimi has an adrenal tumor that Alex does remove successfully. Before the surgery, Mimi and Alex have a conversation about how you can’t help who you love, which sort of mirrors perhaps Alex’s feelings for Joel being reawakened.

After the surgery is complete, Alex warns Claire that Mimi is now back in the closet so to speak. Claire discusses their affair and how she still loves Mimi. When Alex goes to check on Mimi, she pretty tells Mimi that you can’t help who you love. Claire then comes to visit her and it seems to two are rekindling their romance.

Maggie and Gavin get an ultrasound of their baby and the parents to be are delighted to see their baby. However, Maggie and Gavin are afraid to tell people especially Maggie fears telling Dawn as maternity leave may be an issue so close to her taking her boards. Dr. Kalfas mentions that Maggie should go into OBGYN as he is pretty lenient on maternity leave. Maggie agrees to shadow him for a day. And their patient is Ben and Sarah who, despite a difficult pregnancy, doesn’t want a C-section. However, Maggie thinks that is the best option for Sarah that won’t result in her death. But Dr. Kalfas wants to try something that will honour Sarah’s wishes. At first the delivery had some complications but Kalfas manages to deliver a healthy baby boy that Ben and Sarah name Sam.

In the glow of the success of the surgery, Kalfas kisses Maggie that confuses her but Kalfas tells her to forget what happens. He sends Maggie to deliver Sarah’s placenta while he does some paper work. When Maggie goes into deliver the placenta there are complications and Sarah is rushed to the OR but Kalfas cannot be reached.

Maggie finally finds Kalfas in the men’s bathroom shooting up heroine and she goes into the surgery solo and manages to save Sarah that doesn’t involve a hysterectomy.

Later Maggie goes to Dawn to report Kalfas’s drug use when Dawn comments how her scrubs are soiled with blood. Maggie then realizes that she is suffering a miscarriage. We later see Gavin come in to comfort his girlfriend.

These two doctors treated a pair of actors, Marcel and Sandy, who are uber competitive with each other and like to bet each other to do crazy things. One of these crazy stunts landed them in Hope-Zion with a pair of dislocated shoulders. The pair then turn their competitiveness onto Charlie and Joel where they bet that they can set their patients’ shoulder faster than the other. The loser has to do one thing the winner wants within reason. Joel is the winner and the thing that Joel wants to Charlie to do is stay away from Alex as their relationship is over. Charlie thinks that Joel has slept with Alex and punches him in the face just as Alex walks into the doctor’s lounge.

So next week is the season finale and I am not quite sure how this show will end but the one thing that I don’t want is for Alex to fall into a coma and she walks that halls of Hope-Zion as a spirit. I rather have Charlie see spirits again and embrace it. And will we get a resolution to the Charlie-Alex-Joel love triangle? I hope so because I am not quite sure what is Daniel Gillies’ commitment to Saving Hope is now that the CW renewed The Originals for a second season. I guess we will see next week