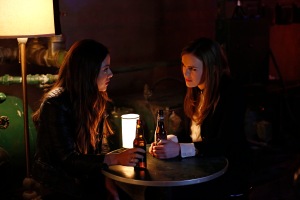 We finally learn a more about Skye in tonight’s episode and I guess my theory that she is Melinda’s daughter is wrong. However, I did get the part right where she is at least part Chinese.

But before I tell you more about Skye, let’s deal with what happened in tonight’s episode.

We open up on three teens (2 women and 1 guy) breaking into a pool and talking about exams. We also see a loner kid in the pool bleachers watching them. Two of the kids jump and start swimming while encouraging the other, Callie (Maiara Walsh) is reluctant to go in but when she is about to, she notices the pool start to freeze over. The other woman manages to get out but the guy. Seth (Daniel Zovatto), gets his leg caught just as he was about get out. The loner kid, Donny Gill (Dylan Minette) uses a pool net pole to break Seth free. We then learn that this school is a SHIELD Academy.

This incident has caused our SHIELD team to investigate. It seems that a cylindrical device was responsible for freezing the pool. The Academy that is involved in this case is the Science and Tech Division. It seems that there is friendly competition between the Science and Tech Academy of SHIELD with the Operations Academy. Both Ward and FitzSimmons ribbing the other on this with Skye looking on not getting it.

We learn that Coulson and Melinda aren’t part of this investigation but have a mission of their own. Skye is concerned as they haven’t seen Coulson since the incident of last week’s episode. Apparently, he has been holed up in his office on the plane looking at photos of his dead body and reading the file on what really happened to him that he requested from Fury.

At the Science and Tech Academy, FitzSimmons, Ward and Skye meet up with Agent Weaver (Christine Adams) who briefs them on what has happened. It seems as part of this investigation FitzSimmons is going to give a talk to the students and we see that FitzSimmons are rock stars to them.

At this lecture, FitzSimmons talks about power and responsibility and is about to talk about lessons they learned while out in the field. Donny listens with rapt attention at their lecture. Meanwhile, Ward talks to Seth to see who wanted to hurt him. Ward gives a list of names but Seth says that he can’t think of anyone but then mentions what a loner Donny is.

Back at the lecture, just as FitzSimmons is about to show pictures of their time on the field, Donny all of sudden gets in cased in ice. FitzSimmons jumps to the rescue. We see this same cylindrical device under one of the lecture hall seats and FitzSimmons tells Skye to smash it thus freeing him.

Ward decides they need to separate. He, Simmons and Skye will go to the Academy’s local hangout while Fitz will befriend Donny.

This hangout is the boiler room of the Academy that has turned into a bar. Skye tells Ward to question Callie as it seems she quite ambitious.

While that is going on, Fitz and Donny bond over the fact that they were both shy and misunderstood by their families. Fitz seems impressed with some of the stuff that Donny has come up with but Donny says that is not the biggest thing he has come up with. Donne show Fitz a design for an energy source that he has built but it doesn’t work. However, Fitz helps him solve what is wrong to get it to work. With that, he leaves Donny to the Boiler Room to meet up with the rest of the team. As he parts, Fitz hopes that Donny will make a friend.

After talking to Callie, Ward learns Seth and Donny are friends and that the set the whole thing up to throw suspicions off them. Because after Fitz leaves, we see Donny bring down a bigger version of their freeze device and uses his now function power source to make it work. Fitz realizes he has been duped and goes back to Donny’s room to see the device. But Seth knocks Fitz out and the two friends run off with the device.

While all this is going on, Melinda and Coulson head to Mexico City to seek out a rogue SHIELD agent. I don’t remember his name but he was partners with Agent Avery, the woman that brought Skye to the orphanage before being killed. While they wait in front of a store where he was last seen, Melinda talks about what happened to Coulson and Melinda also confesses that she and Ward are having sex but we think that perhaps Coulson didn’t hear because they see this rogue agent.

Melinda catches up to him and a fight ensues. This rogue agent is about to take a cyanide pill but Melinda kicks his way. Eventually, he gets corned by Coulson and when identifies himself as a SHIELD agent, this rogue agent looks relieved and asks if this is about the baby girl.

This is where we learn the history of Skye. She was classified as a 0-8-4 or an object of unknown origin. This baby apparently had powers. We learn that Skye was shuttled around because it was to protect her. Melinda tells Coulson that Skye must never know the truth. However, while the team heads back to the Academy to deal with the Donny situation, Coulson does tell Skye and Skye looks devastated at hearing this news.

Back to the main plot, we learn that Seth and Donny want to sell this device to Ian Quinn (David Conrad), who you may remember from episode 3 “The Asset”. However, Ian thinks that device doesn’t work and reneges the deal. But the two SHIELD agent wannabes don’t know that he reneged instead thinking that he will buy if they can prove the device works.

The device gets turned on and it starts to hail really large ice balls. When that stops, it becomes incredibly windy that Ward cannot get to them.  So the team takes the Bus down to the ground to attemp a rescue of Donny. When Donny tries to stop the device, there is a mini explosion that blows Seth off the back of the pick truck and Donny’s right hand gets scorched.

The team manages to extract Donny and Seth but Simmons cannot save Seth. Later we see Donny mourning the loss of his only friend as Agent Weaver takes away to the Sandbox for observation. As we see Donny in the car, he traces the finger in right hand along the window and we it start to freeze. It seems that the Marvel villain Blizzard is born.

Back to Skye for a second, Coulson explains to Melinda how she took the news. Skye sees this news as a positive because all of her life she thought her shuffling around foster homes was because people didn’t want her but it was the opposite. People did want her and all of that was to protect her. We see Skye visit the Academy’s Wall of Valor and amongst some of the names on there include Bucky Barnes of Captain American fame and Agent Avery.

And did Coulson hear Melinda’s confession about her Ward? Why yes he did and believes that Melinda won’t let it interfere with the work they are doing. Melinda tells him the moment it does, she will end it.

In the post credit scene, Ian Quinn looks quite impressed that the device worked. When he gets a call, he thinks it is Seth but is surprised that it is Coulson. Coulson warns Quinn and says that if he ever sets foot in any SHIELD allied countries they will bring him. Just before they hang Quinn tells Coulson that the Clairvoyant says hi.

Just like Coulson resurrection, something tells me there is still more to Skye’s history that we don’t know. What is her power, is it hacking? Who are her parents? It could still be Melinda. Tell your theories. No new episodes until February 4 but that is when we get to see comic book legend Stan Lee make a cameo.