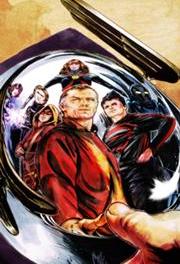 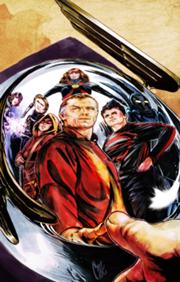 We are at an amusement park, in San Francisco, California. A man made of fire, who calls himself Dr. Phosphorous is attacking everyone. There to stop him is a rag tag group of heroes comprised of Superboy (Conner Kent), the Wonder Twins (Zan and Jayna), Speedy (Mia Deardon), the Blue Beetle (Jaime Reyes) and the White Martian (Megan Morse). They do an okay job and manage to capture Dr. Phosphorous by knocking him into the water. The DEO then takes away Dr. Phosphorous. Jay Garrick considers their mission a failure.  If you recall in Issue 56 of “Olympus” Martha mentions how Connor is at a special school lead by Garrick.

However, Garrick isn’t pleased with how the team handled the Phosporous debacle but Connor defends how they handled it. Garrick then becomes frustrated at dealing with these rookie heroes. Meanwhile the DEO take Phosphorous back to Alcatraz and they wonder how he escaped in the first place. We then see a mysterious silver haired young woman who used set Phosphorous free so she can see what these Teen Titans can do.

Back at Garrick’s school, he tells the Teen Titans all about Bart and the sacrifice that he made as a hero and how the Titans failed to live up to his sacrifice and the work that the Titan Corporation put in to train these heroes.  He tells them that none of them are ready for the field.

However, the Titans don’t think Garrick is being fair and they all defend how they handled the Phosphorous situation. Garrick then mentions how the DEO took in Phosphorous and would have done so without the interference of the Titans. When Connor asks how Phosphorous escaped, Garrick says it is none of their concern. Garrick reams them out again for their actions, saying that even Superman might agree to close down their whole operation.

Conner takes offence to that and the two come to blows. Garrick then tells our Superboy that if he wants to be a leader then he needs to decide if is a Luthor or a Kent.

Later Mia and Jayna have a talk. Mia is pissed at Oliver for dumping her with Garrick and proceeds to have a pity party. Jayna joins it and tells her and Zan’s woes of being on the run but eventually finding a place with Garrick and the Titans. Garrick interrupts their conversation to tell them there are other ways to be a hero that doesn’t involve capes and gear and once again mentions Bart.

Garrick looks at a statue of Bart and vows to not give up on the Titans.

Later we see Megan and Connor have a heart to heart. She talks about being the only White Martian left and shares what her relationship is like with John Jones. Conner discusses how he wants to be like Superman and talks how Martha tried to raise him like she did Clark but it wasn’t the same. The two share a kiss and it is obvious the two have become close and are actually a romantic couple.

The issue ends with Jaime slipping on some blood and seeing Zan crumbled to the floor bleeding with this mysterious woman bring Jaime to his knees.

In the next issue we find out that the person behind Zan’s attack is Slade Wilson’s daughter and she is out for revenge on the heroes that put her father in a coma. She places a bomb on Blue Bettle, takes down Megan and when Connor goes after her, she tells him that he is the one that she wanted anyways. She ends up pulling out a green kryptonite sword.

As “Titans” concludes, Connor is in a showdown with Rose, Slade’s daughter. While it looks like Rose is winning with her kryptonite sword but in the end she is defeated by Connor, Megan, Blue Beetle and a recovered Zan and Jayna.

Garrick is proud of his Titans. Also proud is Superman who pays Connor a visit. He mentions to Clark the events of Olympus to him and asks him the real reason why he is here to see him. Clark tells him that after he tells the world who he really is, they will look at the “S” on his chest differently, thus warning him of the fallout of confessing that he is in an alien.