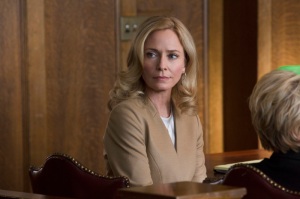 Holy S*$t balls that was one way to end an episode of Arrow. Season 2 has not disappointed me so far. Each episode has just been great and tonight is no exception.

Before I forget, I want to mention that throughout the season, there have news reports on S.T.A.R. Labs particle accelerator and tonight’s episode is no exception. Tonight we learn that the particle accelerator will open up on time. Something tells me that this is what is going to turn Barry Allen into the Flash via an accident.

Anyways, that wasn’t the main focus of tonight’s episode, it was the trial of Moiral Queen and her part of season 1’s Undertaking.

We open the episode, six months ago and we her press conference telling the people of Starling City about the Undertaking, her part in it and how the Glades is in trouble and people should get out.

We are next at Iron Height’s prison, the Count looks like he as recovered from the Vertigo OD he went through courtesy of Arrow when the quake happens and he escapes but not before letting the Doll Maker out (this is the villain we say in episode 3).

Dr. Ivo has taken Oliver, Sara and the freighter gang to the crashed plane. Thinking that Shado and Slade are in it, open fire on it. When one of the guys checks, he sees that it is empty but Ivo sets up detonators to blow up the plane. Ivo then drags Oliver to find the Japanese soldiers

However, Shado and Slade are in the plane but hid. Shado does manage to disarm the detonator. She and Slade decide to go and rescue Oliver.

When Oliver does led Ivo to the soldiers, Ivo notices that the stone arrowhead is missing and wants to know where it is. Oliver pleads ignorance but Ivo doesn’t believe him and drags him back out of the cave and is about to shoot his hands off when Shado and Slade come o the rescue. This is where I noticed that with his now half-burned face, his face looks like Deathstroke’s mask.

Shado will trade the arrowhead for Oliver, Ivo agrees and lets Oliver goes but instad Oliver punches out one of guards and then grabs Sara and runs to safety.

Shado tells Oliver and Sara that she has been wearing the arrowhead around her next because there were some Buddhist characters on it that reminded her of her dad. However, on the other side are some coordinates that Sara believes will lead them to the submarine and what is in it that will save the human race. Oliver asks will it save Slade, who is not looking too hot. Something tells me that this thing that will save the human race is tied into what Blood is trying to do in creating super soldiers back in the present day. So Slade might be the first one to get this. We shall see.

Now with the Island Flashback out of the way, lets get to Moira’s trial. When Oliver and Thea arrive to the courthouse, they are surrounded by a media circus. At the trial, Thea takes the stand. And what was supposed to humanize Moira, actually makes her look more guilty. As ADA Donner puts it, if Thea wouldn’t visit her mom for 5 months then she must have believed in her mother’s guilt.

It is important to note that Donner collapsed during his cross-examination of Thea and his collapse relates to the Count and the return of Vertigo but more on that later.

Also, I should mention that Roy’s only significance in tonight’s episode was to let Thea channel her anger by letting her use him as a punching bag.

Jean Loring determines that Moira needs to take the stand now, even though she was opposed to it in the past. And with ADA Donner out, the DA tasks Laurel to take the lead on the case. It is then that Laurel discovers Donner’s trump card, which he mentioned earlier in the episode.

Even though she could get disbarred for this, Laurel goes to see Moira, not as a lawyer but as a family friend. She begs Moira not to testify because of what she has discovered and the fact that she will grill Moira on it when she takes the stand but she really doesn’t want to.

In one of the courthouse rooms, Moira reveals to Oliver and Thea this secret the DA has on her. Years ago, she cheated on Robert with Malcolm Merlyn. Everyone is shocked. And we then switch to Moira on the stand with Laurel being very aggressive about the affair and considering their affair and everything that Malcolm has done, especially in not killing Walter, shows that Moira wasn’t feeling threatened by Malcolm at all.

A verdict comes in and she is proven not guilty on all counts that surprise all. Oliver tells Diggle and Felicity that he expected his mom the found guilty. I will get to more on this later as this leads to the surprise at the end.

But lets get back to the Count and Vertigo. Diggle wasn’t feeling so hot when he brought Thea and Oliver to the courthouse so he is sent home. But before he does, he goes to Queen Consoldated where Felicity comments on how ill Diggle looks and asks if he got the flu shot, which Diggle says he does. Remember this as it is important later on. Diggle ends on collapsing.

At the Arrow Cave, Felicity has called Oliver, who pulls himself away from Moira’s trial to see how Diggle is. Felicity tells him that Diggle has traces of Vertigo in him. Oliver tasks Felicity to find out how Diggle got exposed to the drug. Before he goes back to the courthouse, Oliver asks Felicity to give Diggle something that he developed that would counteract the effects of Vertigo. However, when Oliver returns, Felicity says it didn’t work.

News reports of Moira’s trial are interrupted with a message from the Count. Remember that Donner collapsed at the courthouse well he wasn’t taken to a hospital but kidnapped by the Count for this little show. Apparently, the Count has managed to get all of Starling City hooked on Vertigo and everyone is going through withdrawal symptoms and the only cure is of course more Vertigo. He gets Donner to beg for more Vertigo and then injects the ADA with more of the drug. Earlier in the episode, the Count killed a doctor, who helped the Count get re-setup, with an OD of Vertigo.

Anyways, Felicity manages to use the video that the Count made to trace his location. He is at Starling City’s old archives. Arrow goes and confronts him and the Count is disappointed how Arrow won’t kill anymore. A small fight ensues that ends with Arrow blowing up a propane tank and rescuing Donner from the Count.

Later, Felicity finds out the common denominator of everyone getting hooked on Vertigo is a mobile flu shot lab. I told you to remember that fact. Felicity finds out where it is going to be next and stops Diggle from going to investigate as she will go herself. When Felicity arrives at the mobile lab, she find the Vertigo but she also finds the Count.

As Oliver and Thea await the verdict on their mom, Oliver receives a phone call that he thinks is from Felicity. It is the Count, who has kidnapped Felicity and is holding her hostage at Queen Consolidated after finding her work ID badge there. He deduces that Oliver is also Arrow.

When Arrow arrives at Queen’s Consolidated, it looks like Felicity is suffering from Vertigo withdrawal too. Arrow tells the Count to leave Felicity alone as his fight is with and not her. But the Count is pissed at Arrow for ruining his life. He tells Oliver that someone help set up his empire again and also hired to draw him out and kill him. The Count also threatens Felicity with injecting more Vertigo. Felicity tells Oliver to let him do it so that he won’t have to kill. However, Oliver shoots several arrows into the Count and he falls through a window and if wasn’t dead already is surely dead now. Oliver does get shot in the arm though. When Oliver goes to make sure that Felicity is alright, it really looks like they are going to kiss but alas they don’t.

Back at the Arrow Cave, Diggle and Felicity thank Oliver for saving them. Diggle goes home but before Felicity does, she tells Oliver that she is sorry that she went in blindly and had to be rescued by him again. She is also sorry that he killed again for her. But Oliver tells her that the Count put her in danger and he had to do it to save. Again, I thought they might kiss but it was a great moment of friendship there. And I can’t believe that Arrow might actually go there with Olicity. I don’t know if they are endgame but I would like then together before the eventually Laurel/Oliver endgame.

We later learn that it is Blood that financed the Count. The corrupt cop comes in with some news for him, Wearing his Brother Blood mask, we see him enter a room with a row of dead men in chairs except one. His name is Cyrus and he says he feels stronger. So Blood found one person that could take this super serum.

Now lets get to the big twist at the end of the episode. As Moira leaves the courthouse, a driver picks her up but isn’t taking her home. Instead she is at an empty parking lot and someone wants to meet with her. The drive is killed by an arrow and we see that it is Malcolm Merlyn who is very much alive and reveals a bombshell (not so much for me because I read a spoiler earlier today) that not only he influenced the result of her verdict but also that Thea is the result of their affair!!!!

Will Moira tell Thea that she still has a father? Will everyone know that Malcolm is still alive? So much to look forward to in the coming weeks but most importantly, next week we meet Barry Allen soon to be known as The Flash.