It is “Pie and Tart Week” and we are down to six bakers. Do Steve, Vincent and Aimee have pastry in their veins or is this the week where they can’t roll with the punches. Let’s find out.

The Bake: A provincial pie – a pie from a particular province. A sweet pie that you hold near a dear.

What I would bake: A Nanaimo Bar pie – of course this would be from my home province of British Columbia.

How I would have fared:

Years ago I took a Chinese pastry class and these were one of the recipes that came with the course. I’ve made these before but used pre-made tarts but I think I would do well with this even if I have to make the tarts from scratch. I have also eaten a ton of these too. For these, I might use my muffin tins or if I can find individual tart shells then I will use those.

I think this will be something I will attempt during my vacation next month along with the pineapple buns and the lammingtons. 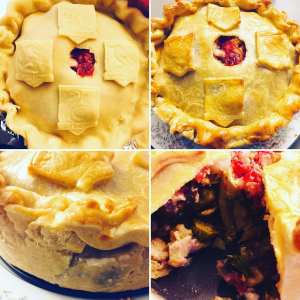 Thanksgiving Dinner Pie made with a hot water crust

The Time: 4 and half hours

The pies I want to try are Aimee’s, Amanda’s, Steve’s and the savory pie of Dougal’s.

We say goodbye to Dougal

Quick Thoughts:  Last week, I predicted that Dougal would go home next and I wasn’t wrong. Dougal has really shone week after week. On the other hand, Amanda is starting to climb and I predict that she will make it to the semi-finals but fall short to making it to the finals. Aimee and Steve stumbled a bit but not enough that it hurt their standings. Next week is “Caramel Week” and I think The Great British Baking Show did this in season 8. My prediction as to who goes home next week: Stephen.