A Daily Planet article (written by Lois Lane) states that Superman is off-world meaning Supergirl is working overtime protecting the world from threats and danger. While Supergirl is busy being a hero, she has time as Kara to be the CatCo reporter and ask President Marsden about the upcoming Alien Summit at Camp David and be a mentor to new cub reporter Nia Nal (Nicole Maines).

Meanwhile, J’onn has been living a peaceful life after leaving the DEO and even attending an alien support group at the alien bar that he co-leads with Fiona (Tiya Sircar). A lot of that participants are using Lena’s image inducer that hides their alien visage with a human one so they can blend in and share how it has helped them fit into society and get jobs. One participant, a neuroscientist, Dr. Vose (Vincent Gale) refuses to hide his alien features that includes tusks on his forearms as he has nothing to be ashamed of. J’onn compliments Vose on how much his research is helping people. 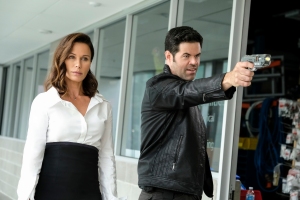 We soon see Vose get attacked in his lab by sibling team Mercy and Otis Graves (Rhona Mitra and Robert Baker) who take his tusks to access his lab. Supergirl arrives to try and stop them but Mercy and Otis use anti gravity cuffs to bring her back down to Earth. Thanks to Brainy, Supergirl breaks free and goes back to Vose’s lab.

J’onn arrives at the scene and tells Supergirl and they discover an EMP has gone missing. J’onn believes it was an anti-alien attack but Supergirl thinks otherwise and it was more about stealing whatever was in Vose’s lab.

When the alien bar gets bombed, J’onn still believes it was an anti-alien attack the same as Vose but Supergirl still thinks the two are unrelated.

Brainy manages to identify Mercy and Otis who have ties to the Luthors. So Supergirl visits Lilian in prison and manages to get her help in where they could possibly be: an abandoned warehouse. When Supergirl arrives, she doesn’t find the Graves sibling but finds a whole bunch of computers whose screen is filled with anti-alien chat rooms that details where to find aliens and how to get rid of them. Brainy can’t track them because all of those chat rooms are on the dark web.

Supergirl realizes that J’onn was right and realizes the Graves are out to stop the Alien Summit. Supergirl begs J’onn to join her fight but he refuses as he is honouring his father’s memory to live peacefully. Supergirl turns to the DEO for help.

At Camp David, the EMP is used to disrupt the summit. The president is moved to safety but Otis opens fire on Marsden who pushes out a Secret Service agent who moved to protect her. Marsden assures Supergirl she is fine and she goes after the Graves siblings. Mercy reveals her anti-alien sentiment and shoots Otis who Supergirl saves but we presume that he deliberately got captured.

At the alien bar, Kara and J’onn come to an understanding and learn through the news that President Marsden has been revealed as an alien as she is showing shape shifting to take the bullet. J’onn also learns that Fiona did not show up for work. We learn that Fiona is with Mercy and Agent Liberty (Sam Witwer) who spews his anti-alien hate and kills Fiona.

In the coda, we are back in Kaznia, the site where Supergirl stopped a train from falling into the abyss when the bridge they were going to cross collapses. Beneath we see Red Supergirl trying to punch her way through a door. 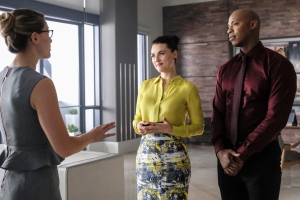