Vixen and the ATOM were in house for Fan Expo Vancouver 2017 this past weekend. DC’s Legends of Tomorrow’s Maisie Richardson-Sellers and Brandon Routh talked about the show and spilled some things to look forward to in season 3. 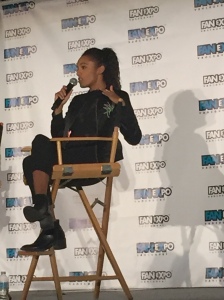 Richardson-Sellers talked about an upcoming episode features four women and not once was a man mentioned thus passing the Bechtel test.

As for time periods, Routh loved doing the Camelot stuff and Richardon-Sellers tells the crowd that this week they are starting to film an episode where she gets to be a pirate. She also previewed that we will be seeing different time periods as Amaya and Zari go in search of the other totems.

This week, we get to see Martin and Jax switch places and Richardon-Seller loved seeing Victor dressed up as what she called “Firestein.” She added that production didn’t make a new suit for Garber but had to use the one made for Franz Drameh. “He was thrilled he could fit into it,” said Richardson-Sellers.

Here is Routh and Richardon-Sellers talking about the upcoming 4-way cross-over:

A new cast addition to the show this season is Courtney Ford who plays Elenor and happens to be the wife of series star Routh in real-life. “I love having my wife on Legends,” said Routh. “It is great to have family around and she adds a great dynamic to the show and also adds a villain we have to contend with.”

When asked about working with the other casts on the Arrowverse shows, Routh wishes for more screen-time with Grant Gustin and hopes to maybe have a Ray-Barry-centric episode in the future. He added that he would love to work with Tom Cavanagh as one of his Wells is very similar to Ray. Richardson-Sellers tells the crowd that she loved working with Emily Bett Rickards and Carlos Valdes.