We pick up exactly where we left off and that is 2017 Los Angeles and the Legends realizing they’ve broken time. As Ray is in awe of seeing Big Ben, the Legends are being charged at by a dinosaur. Before Amaya can use her powers to talk the dinosaur down, a portal opens and it disappears. This is the handiwork of Rip and his new Time Bureau, who started it 5 years ago despite the fact that to the Legends their former captain left 15 minutes ago.

Rip explains that the Time Bureau’s mission is to clean up the mess that the Legends have made which includes putting back all the anachronisms and wiping people’s memories. Rip also disbands the Legends despite the fact that they want to fix their mistake. But that is the very reason why Rip is breaking up the team. 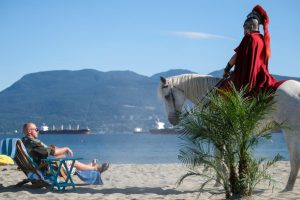 Fast forward 6 months later, we have Sara working in a Bed, Bath and Beyond type store being bullied by her supervisor but taking it. Ray is working for a dating app site and Nate is working in Central City as Citizen Steel protecting its citizens with the help of Kid Flash. We also learn that Nate and Amaya are no longer together as he goes to meet a woman via Ray’s dating app. 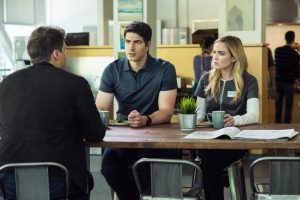 But Rory is living high off the hog as he finally gets his long overdue vacation in Aruba. But Rory’s relaxation gets cut short with the appearance of Julius Caesar. Rory captures him and notifies Sara of the anachronism. Sara quits her job and seeks out Ray and Nate thinking this is the opportunity to prove to the Time Bureau of their usefulness.

The trio make their way to the Time Bureau’s headquarters but as soon as they arrive they are confronted by their agents with Ava Sharpe (Jes Macallan) pinning Ray down. 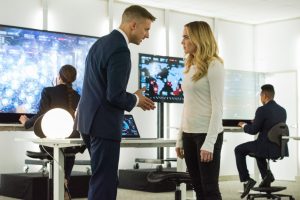 Rip isn’t happy to see his former teammates and doesn’t believe that Rory has Julius Caesar as they got not indication that something is wrong. Nate isn’t happy to see Rip as we learn that he convinced Amaya to return to 1942. We also learn that the Waverider is now a training vessel where wannabe agents are using Legends missions to learn from their mistakes. The Legends believe that often their mistakes end of being for the good.

Rory has Caesar tied up in his cabana and complaining how his salad sucks. When Caesar tricks Rory with the promise of gold, the two get into a fist fight and escapes to the beaches of Aruba were a Roman-themed frat party is happening and Rory mistakes a frat boy as the real Caesar and tackles him to the ground. Time Bureau agents arrive to take Rory and “Caesar” back to their HQ. When they arrive, everyone realizes that have the wrong person in custody.

The Legends then hijack the Waverider, reboot Gideon and time jump 3 minutes into the future to escape the Time Bureau’s clutches. However, the Waverider requires a lot of repairs to get to Aruba so they get to Central City to pick up Jax and Martin. During the 6 months we learn that Jax was in school studying engineering but has dropped out it doesn’t match the experience of being the engineer on the Waverider. With Martin, he has settled back being at home and is happy that his daughter Lily is expecting her first child. When the two see the Waverider, they are on board with the mission.

The Legends head to Aruba and find Caesar giving a rousing speech to the frat boys and the women in the crowd. The crowd thinks it is part of the party. To get Caesar’s attention, Ray creates a dating profile using Gideon’s photo to load on the dating app that targets the frat boys. Soon they become disinterested in Caesar which clears the way for Sara to take him down.

Thinking they’ve secured a win against the Time Bureau, the Legends think they’ve successfully put Caesar back in the correct time and wipe his memory. However, Caesar has stolen Nate’s book on Roman history that he uses to conquer the world thus changing history.

The Time Bureau steps in to try and fix the Legends mistake but Agent Sharpe ends up a captive of Caesar. The Legends step in using their powers to defeat Caesar and his army. Working together, the Legends and the Time Bureau have fixed the mistakes and everything is well.

It looks like the Time Bureau and the Legends are going to work together as Rip has let the team keep his time portal device and other Time Bureau gadgets. Martin also agrees to stay with the team and is confident he will be back in time to see the birth of this grandchild.

In the coda, we are in 1942 Zambesi and Amaya is protecting her village from soldiers invading it. Amaya uses her amulet to actually project multiple animals to defeat the soldiers perhaps showing her powers have grown.