In the penultimate episode of Orphan Black’s fourth season we get a return of one clone after being MIA for quite a few episodes and we learn the fate of another character too.

We haven’t seen Helena for quite a awhile and we see that she is living in Beaver Tail National Park in a hut and killing deer for dinner. After a phone call with Sarah where Helena learns what has been happening since she’s been gone.

Helena returns to civilization to Felix’s loft but her return complicates things between him and Adele. Adele doesn’t buy at all that Helena is part of a triplet with Sarah and Alison. Adele wants answers as to how someone with a Ukrainian accent is came from the same womb as a British and a Canadian woman. Felix gets Helena to leave so he can try and explain things to Adele. Adele wants to know the truth but Felix truthfully tells her that he doesn’t want to get her mixed up in the shit he is in.

Cosima is on the island and with Susan’s guidance fertilizes Sarah’s egg with Ira’s sperm. Soon Cosima grows tired so Susan suggests she rests and while she rests gives her the history of Neolution. While reading the book, Cosima meets Charlotte and later she and Susan discuss Charlotte and her creation and more.

Donnie is out on bail and soon he and Alison meet with Adele about his case back at their place. Adele tells the Hendrix’s that their house is under surveillance and wants to know what Duko has against them. Alison slips that Duko isn’t responsible and Adele wants to know how she knows. Felix jumps in to say that Duko is on leave. 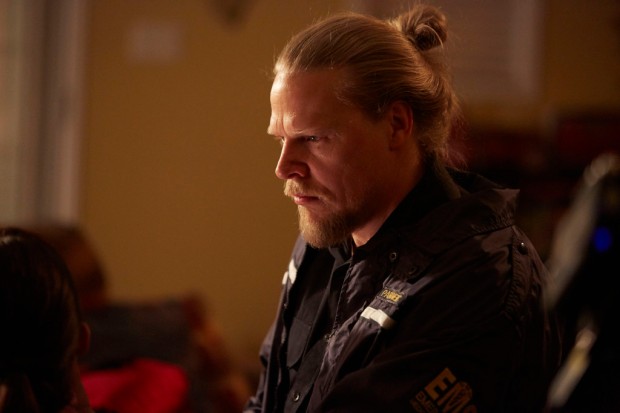 Later on, after Donnie and Alison have sex, she wants to pray as she is having a crisis of faith. Alison wants to leave and suggests she and Donnie go to Niagara Falls and send for the kids. As the two are packing, Donnie is taken hostage by Frank, the Neolution paramedic. Frank ties up Donnie and Alison. Frank then threatens to put in one of the Brightborn bots into Alison unless she tells him what happened to Duko and what Sarah is up to. Alison starts to pray and as Frank is about to place the bot into Alison, Helena busts in and shoots an arrow through Frank’s neck killing him. Helena then notes that Donnie looks like a stuffed pig on a spit.

Before Rachel and Ira meet with Sarah and Felix at their hotel room, they watch a television interview that Evie Cho gives. Evie tells the interviewer, George Strombolopous, her humble beginnings in Tisdale and how she decided to open up a Brightborn facility there to create jobs. Rachel and Ira note the PR ploy this interview is.

Speaking of Evie, Dr. Van Lier has implanted a bot into Evie and it seems to be working in curing her shingles. Evie is preparing for a big press conference about her gene therapy bot but we also see that she is being blackmailed. Someone has sent her a very damaging video that shows Brightborn killing a baby shortly after birth and threatens to send it out unless she leaves her alone. We see Evie send her hench woman Roxie to take care of it.

When Rachel and Ira meet with Sarah and Felix, Rachel discusses her plans to take down Evie. Part of that plan is to find to pregnant Brightborn surrogates, Tabitha and Kendra. Sarah says she will find the pregnant ladies and refuses Rachel’s and Ira’s help.

Art manages to get a lead to where Tabitha and Kendra might be and head over to a women’s shelter. Unfortunately, the two come across a crime scene. The detective on the scene is the one that arrested Donnie. He tells Art that Tabitha hanged herself but Art knows better. The detective asks about Duko but Art lies and tells him that he doesn’t know what happened to him. We see that this detective too is working for Evie to say other people are looking for Tabitha.

Sarah sees Trina, the pregnant Neolutionist emerge from the women’s shelter. Sarah pretends to be Beth and gets Trina to open up about Tabitha and Kendra.

Thanks to the information Trina gives her, Sarah and Art are off to Tisdale to find Kendra. Rachel calls and tells Sarah that Kendra could be in Pickering as she dropped off her 4-year old son there. Bur Sarah wants to go follow her own leads. Thanks to that phone call, Ira manages to locate Sarah at Tisdale and Rachel sends him there.

Sarah and Art find Kendra at a house. At first Kendra doesn’t trust them and holds a gun to them. Eventually, Kendra opesn up about her involvement with Brightborn and shows the video of the baby being euthanized. 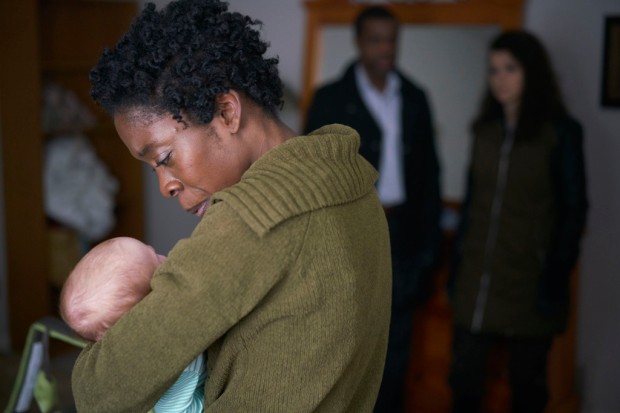 Art and Sarah manage to convince Kendra and her baby Jacob to come with them and their safe house. However, Art notes flashlights outside the house. Art lets Kendra deal with a crying Jacob while he and Sarah deal with the intrudors. At the same time, the house’s landline rings and Kendra answers it. It is Rachel on the other line. Rachel threatens Kendra’s other son unless she agrees to leave with Ira. As for the intruders, it is Roxie. Art ties them up but Roxie and her new partner aren’t talking. Sarah soon sees that Kendra has left with Ira.

Art and Sarah go back to the hotel and thinks that Ira and Rachel have double crossed them. However, we see that this was all part of Rachel’s plan. Rachel visits Evie just before her press conference starts. Rachel says she has Kendra and the damaging video. Rachel will give Evie both if she gives her a seat at the Neolution table. Evie agrees and Rachel even gets her to admit why she euthanized babies with genetic deformities. We soon see that Rachel’s necklace is a camera and Ira has video taped the entire confessions. As Evie’s press conference starts, all the reporters get the video and starts questioning her. Dr. Van Lier has to whisk her away.

Throughout the episode, we see Rachel’s vision of the old bearded man. This time though, Rachel sees the man in the woods walking towards a cabin. We soon see that the man isn’t alone but a whole bunch other men with guns. We also see the white swan and an axe. We then see the head of the swan. Rachel tells Ira that she believes that the visions are of the island and telling her something.

We then have a scene in the cabin with a woman working on something and we see that it is Delphine!

It is an appearance that has been 9 episodes in the making. With the season finale next week it really is hard to say what is going on but for sure we haven’t seen the last of Evie Cho!