This week’s Arrow features a guest turn from Tom Amandes who starred in one of my favourite TV shows Everwood and so glad to know what we will see more of Mr. Amandes considering his connection to one of our characters. We also see the return of Colton Haynes as Roy Harper and Katrina Law as Nyssa Al Ghul

We open with Nyssa in her spacious dungeon digs when a lady League member (didn’t catch her name but is played by Natasha Gayle so let’s call her Natasha) brings her a pepper for dinner. Inside the pepper is a knife that Nyssa uses to escape her cell. With Natasha and some loyal League members, Nyssa escapes Nanda Parbat to Japan. In Japan, Nyssa seeks something called the Locus and fights Tatsu/Katana for it. However, the two ladies are evenly matched in their skills so Nyssa proposes that Tatsu listens to her tale and why she should help her.

Reiter is torturing Oliver to find out why he went after maps of the island. Taiana begs Reiter to stop and he only does when Shado shoots him with an arrow. Shado of course is a vision that Oliver is happening. Shado helps Oliver to forgive himself and to let go of his darkness. When Oliver wakes, he admits to Taiana that he was the one that killed her brother.

Felicity is no Steve Jobs

Felicity is going through a dry run of her presentation on Palmer Technologies Power Cell, a product that could make or break the company. However, Felicity flounders and one of the board members suggests that she should not make the presentation.

Later, Curtis encourages Felicity to make the speech and be the Felicity that is all kick ass and not the one whose confidence was shattered after her accident.

The Return of Roy Harper

Team Arrow is chasing after a thief at Amertek but he makes some Cirque de Soleil moves and escapes. Green Arrow and Speedy are after the thief and just when Speedy has him in her sights, she collapses unconscious allowing the thief to get away.

Felicity tells the team that the tech stolen could determine the vulnerabilities of computer systems.

We learn from Malcolm that Thea suppressing her blood lust has caused her to collapse. Oliver then learns that Darhk’s powers didn’t work on Thea but it helped abate her blood lust for a while. Malcolm believes that Thea needs to kill or the Lazarus Pit will then take the host.

Alex keeps on texting Oliver so he meets with him to learn that another candidate has thrown their hat into the mayoral race and her name is Ruve Adams. Knowing that Ruve is Darhk’s wife, the Green Arrow goes and pays a visit to her at her campaign office and wants her to arrange a meeting with her husband. The Green Arrow shows up to the meeting but doesn’t go to it as the Calculator struck.

Laurel and Diggle alerts Oliver that the thief has struck Cadmus Tech and has stolen a weapon. Oliver manages to catch up with him and sees that it is Roy but he punches Oliver and gets away.

Roy does steal it and get it to a drone. Team Arrow arrives and Felicity realizes that Roy isn’t doing this voluntarily so Oliver tranquilizes him.

At the Arrow Cave, Roy is impressed with the new digs and explains that he was in Hub City when someone called the Calculator figured out who he was and was going to expose him unless he did his bidding. Roy did so to protect Oliver.

Felicity is taking a look at the camera contact that was in Roy’s eye that tracked his every movement. Felicity managed to hack into the controlling computer and behind it is the Calculator (Tom Amandes) and the two pretty much have a hack off that the Calculator wins for now.

Roy pays Thea a visit who is happy to see him but she starts to cough violently. Laurel and Malcolm rush into her room and we see Ra’s wound appear and then heal itself.

Back at the Arrow Cave, Felicity figures that the Calculator is not going to take down the Internet but systems that could cripple a city and killing thousands. Felicity then finds out where the Calculator is going to plant the device, at some data center. 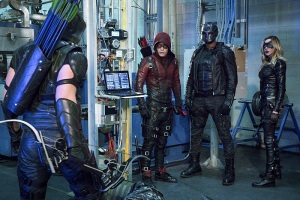 Team Arrow, which now includes Arsenal back in the fold, arrive to take down the Calculator’s men. And once again, Felicity and the Calculator are in another Hack off, which they taunt each other in their disguised voices. Each gets the upper hand on the other but Felicity emerges victorious. However, the Calculator has disabled the remote detonation of the C4 that the team planted. The only way to make things go boom is Roy decides to stay behind and shoot an arrow to trigger it. Oliver gets Roy to promise that he will run like heck to get out of the building before it explodes. Roy does shoot the arrow and we see the building go up in flames but then we see Arsenal zip line to safety telling the team how me missed all of this. And we miss you too Arsenal!

Back at the Arrow Cave, Roy says his good byes to the team again and he pays Thea a final visit where the two have a tearful and heartfelt good bye. 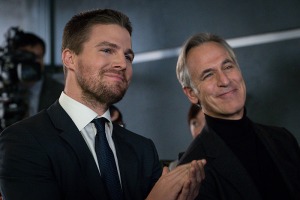 At Palmer Technologies, Felicity makes her presentation and it is a success. Watching proudly is Oliver and the Calculator?!? Turns out to no ones surprise that the Calculator is one Noah Kuttler aka Felicity’s dad.

Oliver goes to check on Thea and we see that her condition has worsened and she is now in a coma and it doesn’t look great. Nyssa is there and tells Oliver she has something called the Locus that can save Thea. The only thing that Nyssa wants from her ex-husband is for him to kill Malcolm Merlyn.