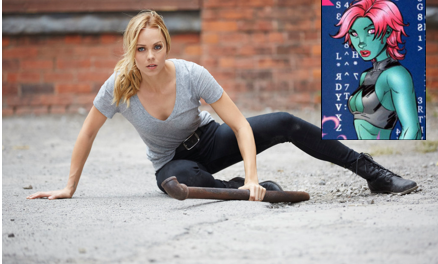 We knew it was bound to happen, and so happy that it is, but another Supergirl is on her way to appear on CBS’s Supergirl. TVLine has reported that Laura Vandervoort will appear in the show’s episode 15 playing DC Comic villain Indigo.

The show’s version of the character is described as “living, strong-willed supercomputer that was sentenced to Fort Rozz after turning against the people of Krypton. Now on Earth, Indigo will let nothing stand in her way.”

Vandervoort of course played Kara Zor-El on the CW’s Smallville and joins Helen Slater, who played the silver screen Supergirl (and recurs as Eliza Danvers) on the freshman series. Entertainment Weekly also reported that all three Supergirls (Melissa Benoist, Slater and Vandervoort) will “unite in an episode later this season”.

In addition to Vandervoort, CBS has also announced that Jeff Branson (The Young and the Restless) will recur as the Master Jailer. The character is described as “the forceful and unrelenting jail guard on Fort Rozz who showed no mercy. Now on Earth, he is hellbent on catching all of the Fort Rozz escapees and brutally bringing them to justice.”