It is too bad that CTV released the synopsis for episode 12 “Shine a Light”, its Christmas episode ahead of tonight’s episode. Because in that synopsis, it revealed that Maggie will be a okay. Even though knowing Maggie’s fate, it was a bit emotional seeing her spirit feel lost.

Cassie has the difficult task of letting the father of the young woman, whose arm was severed, that she didn’t make it. The father, Mr. Kelehar, is so distraught that he grabs a scalpel and heads towards the bomber’s room. Cassie follows and tries to stop Mr. Kelehar but he wants to kill the man that killed his Lily. Alex emerges from the bombers room and convinces Mr. Kelehar that Lily wouldn’t want him to do what he is about to do. As Kelehar collapses on the floor, he slits his wrist. Cassie manages to stop the bleeding and is stitching him up. Kelehar asks if he needs to ID his daughter’s body and Cassie says he does.

Later on in the ER bay, Cassie has let the day get to her and Bishop comes to comfort her. As Cassie is finishing up some paper work, Bishop suggests that Cassie go home but she needs to do something first. Bishop finds her in the morgue cleaning up Lily so she is more presentable for her father and he offers to help. Kelehar is grateful to Cassie for making her daughter look at peace. As their shift winds down, Cassie thanks Bishop for everything and the two share an awkward hug. It does seem like the show is going to pair these two up.

Dawn tells the detective who was with the bomber about her assault. The detective will be there for her but because it was a month ago and it is he said-she said, her case will be difficult. Before Dawn pulls the trigger, she needs to do somethings first. The first thing is to tell Asha what she is going to do. Asha tells Dawn that Lane warned her about Dawn. Later on Lane confront Dawn and threatens her to expose all she did to get to the top in hopes that Dawn won’t press charges. Lane even throws in her face that she lost Giselle because she supposedly put her career first, something Dawn denies.

After seeing Lane with Asha, this furthers Dawn’s resolve to press charges against Lane. Dawn tells Asha what she is going to do in hopes it will give her the courage to admit how dangerous Lane is. When Dawn does press charges, the detective tells her that she isn’t the first one to come forward about Lane. Asha decided to side with Dawn after hearing Lane getting all vindictive against Dawn. So Asha and Dawn work together to make sure Lane doesn’t hurt another person. We then see the detective take Lane into custody. 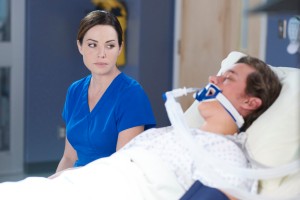 We discover that the bomber’s name is Michael Schneller and was an engineering student. Alex feels incredibly guilty that she saved Michael’s life after what he did to Maggie. However, Michael takes a turn for the worse and Alex makes the decision to be at his bedside as he dies.

The detective then gets Alex to meet Michael’s mother. Mrs. Schneller thanks Alex for treating her son like any other patient. Mrs. Schneller then explains how Michael had a mental illness where he heard voices in his head. Medication wasn’t working and his mom feels guilty for not getting him help in time.

Later on we see Mrs. Schneller at the morgue to ID her son’s body.

The Return of Sydney Katz

Sydney has returned to help Shelby. Dev and Bishop have delivered a baby girl that is in the NICU. However, Dev notices that Shelby’s leg isn’t doing to hot. Unfortunately, the leg is infected so bad that Shelby says the only choice is to amputate or else Shelby dies. Before heading into surgery, Shelby names her little girl Rosie and wants to see her before she goes under.

Shelby ends up being fine and while she cannot hold Rosie, Sydney says that she can touch her daughter.

Charlie tries to get Maggie to tell him where her body is but she disappears when he gets called into a consult. Charlie interrupts Shelby’s first surgery and learns from Dev that Maggie went to get clotting factors from the third floor lab. Charlie rushes to the third floor and finds Maggie. Shahir is called in and is determined that Maggie has a brain bleed and needs an OR stat.

During the operation, Shahir is calm and steady because that is what Maggie needs. Zach is watching the surgery and feels guilty that he cleared Maggie for work and Alex counters that she saved the bomber that put her in this predicament. Zach concedes that Alex wins the guilt war.

Meanwhile, spirit Maggie isn’t very helpful as the only thing she is concerned about is Shelby and starts telling Charlie what to look for and do during her amputation surgery. Charlie needs Maggie to think of herself first. Charlie explains that Maggie is in this predicament because she went all doctor mode to take of her patient and not herself. Maggie says that she has nothing to live for.

During Shelby’s amputation surgery, Maggie appears and says that the only she has ever known is being a doctor and worries that when she wakes up that she won’t be the same. Maggie also says one way doctors can save their patients if they know them. Unfortunately, Maggie doesn’t know who she is. Charlie tries to get Maggie to fight and notices that she is bleeding in her ear. Alex, who is in the surgery with Charlie, knows that he is talking to Maggie especially when he tells her to go to her. 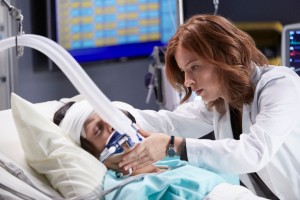 When Alex goes to see Maggie in the ICU, we learn that her brain is swelling. With Shahir not available, Alex performs a surgery to drain the fluid building up in her brain. Charlie and spirit Maggie are watching all of this. Charlie gives one last pep talk and the spirit Maggie disappears and Maggie wakes up. Surrounded by Zach, Jackson, Alex and Shahir. Maggie spots Charlie and gives a smile. Not quite sure if Maggie remembers her time in the spirit world but I am guessing not.

Alex checks on Maggie and she will be fine. Sydney later visits Maggie, who is happy to see her again. Maggie tells Sydney that she wants to take some time for herself and when Sydney goes to leave to get more blankets, Maggie asks her to stay. It is possible that their relationship might be rekindled but unsure if Stacey Farber is back or is this just a one off. Also, as someone who did watch Degrassi: The Next Generation it really is nice to see Farber in a grown up role.

As Charlie prepares to go home, Alex decides to stay and be by Maggie’s bedside as she sleeps.

So glad Maggie is going to be okay and most of you thought so too!

Next week looks like the Christmas episode but it seems that CTV is skipping episode 11.