We pickup where we left off in the last episode and that is Cat’s exclusive interview with Supergirl. Questions include where is Supergirl from and her answer sounds oddly familiar to Superman’s origin story. Other questions include what powers Supergirl has and when Cat picks up that her powers aren’t as refined as Superman’s, Supergirl starts to defend herself. Cat then starts asking if Supergirl wants a family and all sorts of personal questions. Supergirl gets a bit offended and says no one asks her cousin such questions. This surprises Cat and Supergirl flies off effectively ending the interview.

The next day, Winn is surprised that Kara would reveal such a thing to Cat but she didn’t mean to. Cat is happy that she finally scooped the Daily Planet and is going to write an expose on Supergirl in their monthly magazine that will come out in a days and half time. Cat tasks Kara to throw the launch party together.

Hank and Alex aren’t happy that Kara also told Cat about her connection to Superman. A car pileup results us in meeting the villain of the week: Reactron (Chris Browning, a Superman villain who has come from Metropolis to target someone close to the Man of Steel, his cousin.

Supergirl arrives and rescues a bus driver but when Reacton arrives on the scene, blasting stuff in his Iron Man like suit, he gets the better of Supergirl and takes off but not before she damages his suit.

Back at the DEO, because Reactron is human with a man-made suit, he is not the DEO’s problem. Kara disagrees. Good thing that Kara has her Superfriends to help her. Winn has procured an empty office in CatCo to use as their Supergirl HQ. In the office, the Superfriends are working to find out who is Reactron and where to find him. James wants to call in the big guy to help but Kara says no as how can people believe she can be as good as him if he comes in to save her. Oh and James accidentally told Winn that Clark Kent is Superman and his reaction is priceless.

Meanwhile at Lord Technologies, Maxwell is looking over his new clean technology train when Reactron crashes in and kidnaps Maxwell to help fix his suit.

Kara has proofread Cat’s article and is not pleased with the nasty tone. Kara says that Supergirl wants to prove herself as a hero and not be in her cousin’s shadow.

Despite initially not wanting to help, Alex has joined Team Superfriends and determines that Reactron is Ben Krull, whose wife died in a nuclear explosion that he survived. Krull blames Superman for not being able to save his wife so now wants him to suffer. The Superfriends find out where Reactron is and Supergirl goes to rescue Maxwell and take on Reactron.

Supergirl does save Maxwell but gets her butt kicked by Reactron that Superman has to fly in to the rescue. You don’t see his face but we know it is the man in blue.

Back at her loft, Kara discovers that James called in Superman using his special watch. Adding insult to injury, Maxwell thanks Superman not Supergirl for saving him. Kara is miffed that James doesn’t believe in her. James leaves but is not sorry that he did what he did because she is alive and he was tasked to look after her. Kara then tells Alex that she was supposed to be the one that saved Superman. Alex tells Kara that she is at the beginning of her story but that soon she will be saving Superman. 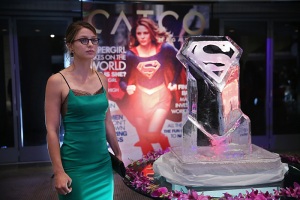 Kara arrives late for the party and forgets the paper magazines but Winn saves her butt. As a thank you, Winn and Kara share a dance. I am really digging Jeremy Jordan on this show. He is so lovable and cute. Too bad his crush on Kara is unrequited.

James cuts in their dance to apologize to Kara and says that he does believe in her and that calling Superman was just a reaction that he has come to rely on. Also on the dance floor is Cat and Maxwell who have a verbal and flirtatious sparring match.

All the dancing is interrupted by the arrival of Reactron. Kara sneaks away to change into Supergirl, tells Maxwell to make a quick getaway when Reactron makes a move to him.

Meanwhile, Henshaw, using his red eyes sensed that Alex was up to something. Alex admits to wanting to help Kara because keep the world safe from all the threat alien or not. Henshaw decides to help too.

Supergirl and Reactron fight, a pillar falls down that is about to fall on Winn but Supergirl arrives in time to save him. James decides to play hero himself and declares himself Superman’s best friend so hurting him will hurt Superman. So Reactron takes the bait and goes after James. Alex tells Kara the way to stop Reactron is to pull the thing that powers his suit but needs to in case the nuclear reactor in lead so it doesn’t cause a meltdown. Kara does save the day and tells James for being foolish but he believed that she would save him.

Back at the DEO, Kara wants to celebrate their latest win with Alex but she suggests that her sister instead celebrate with James. Throughout the episode, Kara’s crush on James is very evident to Alex, who sees that he puts a huge smile on her face.

When Kara goes to see James the next day at his office, he isn’t alone. Lucy Lane, little sister to the awesome Lois (as long as she is played by Erica Durance). Kara leaves and uses her superhearing to learn that James and Lucy have a romantic history.

Winn suggests doing Supergirl stuff in their office but Kara is a bit heartbroken to that and goes back to work. But then Clark starts a chat. Kara thanks Clark for thanking her life but he thanks her instead. Clark is proud of Kara for stopping Reatron when he couldn’t; stopping Reactron was a job for Supergirl. Hearing that was something that Kara needed to hear and tells Clark that. Clark responds and says that what’s family is for. This whole chat puts a smile on my face. So great to see the familial relationship on display here.

So Kara and Alex are having some sister time over takeout Chinese and when Alex mentions that even though Cat’s article was nasty it does show that the media mogul respects Supergirl. Sirens are then heard and Kara springs into action. Before leaving, Kara wants Alex to wait to watch Homeland, a nod to Benoist’s season 1 guest turn on that show.

Three episodes in and I think Supergirl is getting better. The sister bond is one of the strenghts of the show and Benoist continues to grow into the role and blossom really well.

If there was one thing that I want the show to drop is the opening narration from our heroine. It sounds so similar to the one for The Flash that I could go without and the same goes for that show too.

Next week we get more Lucy Lane and the one thing I want to know on her end is if there is a Clois in this universe. Even if Lois and Clark never appear on screen, I can make do if they are together.