In tonight’s Saving Hope, we see a vulnerable Dawn, an old face from Alex’s past shows up at Hope-Zion, Charlie is dealing with two Rookie Blue spirits, Cassie takes things too personally and isn’t baby Luke like the cutest baby ever on TV.

Shaun Benson as Lane and Michelle Nolden as Dawn Bell

Lane, Dawn’s boyfriend, pays her a visit to not only give her a breakfast smoothie but also a beautiful diamond necklace. Dawn is overwhelmed with the gift and breaks her no PDA rule at work to give Lane a hug and a kiss. The two then make plans for lunch. When Lane comes for their lunch date, he sees that Dawn isn’t wearing the necklace and wonders why. Dawn says it isn’t practical for her to wear it as she always has to take it off when scrubbing for a surgery so she fear losing it. Lane looks a bit upset but passes it off as a joke. When Dawn is ready to leave for lunch, Lane suddenly remembers he has an emergency meeting so can longer make lunch and asks for a rain check. Later, Lane comes back with umbrella in hand doing a little Singin’ in the Rain dance asking for his rain check. Lane realizes it’s cheesy but Dawn loved the gesture and admits to being afraid of where their relationship is leading. Lane is understanding and it seems their relationship is back on track. I am really hoping that Lane isn’t abusive because this guy seems too good to be true.

Coming into the ER is Anita, a young woman in a chicken costume. Anita complains of numbness in her leg but doesn’t want to stay because she is the designated driver for an anniversary party.

However, Anita soon has no feelings in her legs and freaks out. Shahir consults and determines that Anita has conversion syndrome, meaning that Anita’s paralysis is all in her head. Shahir wants Jackson and Zach to let her remain in the ER and appear to be treating her so they can get to the root of her problem. Zach and Jackson don’t want to take up an ER bed but decide to help. Jackson and Zach remember Anita mentioning a friend of hers, Samantha Smits, was treated in the ER. Jackson and Zach find out that Samantha was killed by a drunk driver, one year ago today.

Zach goes to talk to Anita who opens up about not being able to pick up Samantha and blames herself and seeks her family’s forgiveness. Zach tells Anita that it is not her fault and should not blame herself for what happened to Samantha.

As Anita leaves, Zach tells her that he can relate about losing a friend and tells her about Joel.

Dana’s patient is Elizabeth Grant (Charlotte Sullivan), who has come in when someone threw acid on her face. Charlie is assisting Dana on repairing Elizabeth’s arm and saving the other burned arm. Cassie comes in late to the surgery and is tasked to remove the burned skin. However, Cassie is having a hard time concentrating as she is taking the case very personally. When Elizabeth’s heart rate increases, Dana sees that there is no pulse in her burned arm and they need to do something or she will lose it.

While working to save Elizabeth’s arm, Cassie is having a hard time doing a procedure. Dana says that she needs to stop thinking about the patient or she won’t be able to do her job. Cassie makes a remark that someone has to think of the patient, something Dana doesn’t take too kindly.

When a police officer asks about Elizabeth and wanting to be kept informed, Cassie tells the cop that she hopes they catch the bastard that did that to Elizabeth. Dana pulls Cassie aside tells her she can’t get emotional over every patient. Cassie admits that one of the reasons she is taking this so personally is that her sister dated a bastard. I am thinking that this must be Curtis but who knows. 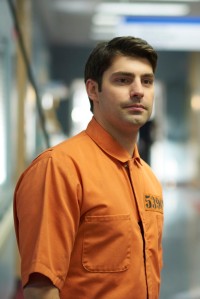 Tom tells Charlie his spirit will be going back in his body. The two bond over being orphans from the Prairies at a young age. Tom is happy to have Charlie in his corner.

While Charlie doesn’t indicate that it’s Tom’s spirit he is seeing, he does tell Alex that he is seeing ghost when their conversation is interrupted by Tom’s presence.

Tom isn’t the only spirit haunting Charlie. Elizabeth is too and blames herself to what happened and disappears.

When trying to find Elizabeth, Charlie finds Tom instead who tells him where to find her and that she remind him of his friend Marina Pitts, back during his days in Hay River, Alberta.

In the morgue, Elizabeth is a therapist and was working with a really violent client, named Jake, and should have known that this would have happened. Elizabeth wants to know how badly burned her face is. When Elizabeth sees this, she gets upset and Charlie says they will do what they can to restore her face. Despite her better judgement, Elizabeth admits to being in love with Jake. 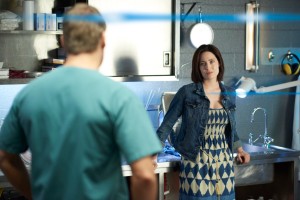 When things were going south for Elizabeth, Charlie talks to her but ends up sounding trite. When asked what Elizabeth would tell herself, she said she would wait till she was ready to talk. We later see Elizabeth tell Charlie that she is ready.

Charlie has managed to find out Tom’s friend Marina. Unfortunately, Marina has been dead for 15 years and was killed in a similar way that Tom’s wife was killed. Charlie realizes that Tom is really guilty and says that he will rot in prison once he wakes up. Tom isn’t happy and all of a sudden the lights in the morgue and basement goes off. Tom’s voice also goes deep in an evil way and tells Charlie that he won’t forget what Charlie has done to him. Charlie says that Tom will but once he wakes up, he gives Charlie such an evil glare. Let’s see if Tom truly remembers his time in the spirit world and if this will bite Charlie in the butt. If so, I hope that Alex and baby Luke aren’t in any danger.

The episode begins with Alex showing a photo album she made for Luke. It is only filled with pictures of the three of them as they have no immediate or extended family to speak of. Alex is reluctant to tell her son about how his grandpa committed suicide, his uncle plunged to his death and his grandma is a drunk.

Alex’s patient is Kyle, the man that got her brother Luke hooked on drugs. Kyle has come to Hope Zion to see Alex because he is sick as he starts coughing up blood.

Alex pawns Kyle off to Patrick because she cannot keep her personal feelings out of it. But when Alex takes a look at Kyle’s file, she sees that he has a tumor in his stomach and the surgery required is something she has done before.

Patrick takes Alex to see Kyle’s wife Maya. Alex learns that Kyle has a son named Lucas, that Luke told Maya how he blamed her husband for his drug problems and that Luke became Kyle’s sponsor. Maya hopes that Alex will see Kyle after he comes out of surgery; Alex is hesitant to say yes.

Dr. Mirani tells Alex that Patrick got pulled out of the surgery for an emergency in the ER. So Alex performs the surgery and once in sees that the tumor has attached to everything. Dr. Mirani wants to close up so Kyle can spend his remaining days with his family. But Alex is determined to save her little brother’s best friend as that’s what he would have wanted.

In ICU, Alex visits Kyle and shares that she too named her son Luke. Alex has forgiven Kyle and he mentions that the Reids all have a big heart. Kyle thanks her and her family for saving him and how her mom really saved him from the hell that was his life. Maya and her son Lucas pay and visit and three share a nice family moment.

Back at home, Alex is showing baby Luke family photos of herself and Luke when they were kids. Alex notices that there are not pictures of her mom so she calls her to ask for one. While on the phone, Alex puts her on with her grandson.

And this baby the show got to play baby Luke is absolutely adorable.

A quick note, I am away on business next week so I won’t be able to watch this episode until Sunday October 25.