The following recap is for season 4 Continuum which airs one week on Showcase before it airs on SyFy. If you don’t want to know what happens, stop reading now. If you do want to, then please proceed.

“Rush Hour” picks up exactly where the last episode picks up with Kellogg watching the holographic message from future him. Future Kellogg tells Kellogg what his future is like and that it is up to him to prevent it. Future Kellogg asks that Kellogg trust the help from his Future Soldiers, they know what they are doing and to also trust Future him.

As the message ends, Kellogg receives a text from Larry that they’ve got her. The her of course is Emily who is a cramped closet. Larry snaps a photo of Emily, which Kellogg uses to text to Alec.

Before receiving the text, Alec and Kiera are looking over the schematics of the Future Soldiers armor and discussing that future that Brad comes from that is filled with anarchy. Kiera also gives the pen that Alec wanted from the Future Soldiers so he can take it apart and examine. Their talk is interrupted by Wilhelm scream ringtone that Alec uses for Kellogg. Of course, Alec sees the picture of Emily and when Kellogg calls, Alec demands for her safety. Kiera wants to know what Kellogg wants and is pleased that Alec and Kiera are at the same place as he wants to talk to both of them. Basically, Kellogg wants all the data that Alec stole from him in exchange for Emily. Alec doesn’t want to as it would mean Kiera not going home but eventually a deal is struck for Kiera to deliver the data on a hard drive in person to Kellogg. Kiera tells Alec that they really need to plan carefully around Kellogg. Part of that plan is not allowing Kellogg to time travel as he has the other time travel device.

After their phone call, Kiera convinces Alec to let her call Carlos for help. Alec meanwhile recruits Lucas, Jason and Julian to help him with getting Kellogg his data back.

At Piron, Marcellus meets with his commander (i.e. Kellogg) and gives him a list of supplies he and his team need as well as access to a building that Piron operates but doesn’t own. Kellogg says he will see what he can do and talk turns to the future. Marcellus explains their future, Vancouver is a dark place, where downtown is destroyed but that Future Kellogg told him that Kellogg would be the one to lead them to prevent their future.

Kiera goes to see Carlos at the VPD and tells him that Kellogg has taken Emily. Carlos immediately wants to bring Kellogg in but Kiera wants to wait and see what Kellogg’s ultimate game plan is. Carlos agrees to stand down. Carlos wonders what is up with Kiera these days and she shares her dream of being back in her time and reuniting with her son. Carlos asks if Kiera could go back, would she. Kiera immediately says she would.

Carlos meets with Kellogg at Piron who denies any involvement in Emily’s “disappearance”. Dillon shows up and we learn that he now works for Kellogg as head of security. If you recall, Dillon was gravely injured last season when Sonya set off a bomb that killed her. Dillon now has burned scars on the left side of his face and walks with a cane. The whole point of Dillon going to Kellogg’s office was to ruffle Carlos’ feathers.

Meanwhile, Kiera and Brad meet up. Brad gives Kiera something that I am not 100% sure what it was. Brad tells Kiera that he plans to stay embedded with the Future Soldiers to find out their end game. Kiera is surprised that he doesn’t know while Brad replies he is on a need to know basis. The two then exchange information from both their sides. Brad tells Kiera of Marcellus meeting with Kellogg and Kiera tells Brad to blame her actions on Liber8. Brad also tells Kiera that she needs to return the pen she stole. Kiera agrees but Brad senses that Kiera may not be saying everything and tells her that the only way their relationship is going to work is if they trust each other, which he does. Kiera reassures Brad that he does trust him and the two share a hug but the looks the two give seem to indicate otherwise.

Back at Alec’s, Lucas and Julian are working getting the Kellogg’s file back onto a hard drive. Alec is wallowing that he is once again behind a computer screen when he should be out there finding his girlfriend. Alec believes that he is not being man enough. Julian says that it is better to do what he is doing than trying to be a man. Kiera comes back just in time to receive the hard drive and before she meets Kellogg, Carlos gives her an update on his visit to Kellogg and tells her that Dillon now works for him. Carlos also informs Kiera that he and a bunch of the VPD will be nearby to monitor the meeting. Shortly after Kiera leaves, Alec decides to take matters in his own hands and leaves to save Emily.

At a sushi restaurant along Coal Harbour (this restaurant I believe doesn’t exist in real life), Dillon greets Kiera and tells her that she must change per Kellogg’s orders. Kiera relents and takes the garment bag and gives Dillon the hard drive. After Kiera changes into a dress and some heals, Kellogg tries to make small talk but Kiera isn’t interested as she wants proof of life that Emily is okay. So off we go to the warehouse as we see Emily being forcefully removed from her cramped room and dragged along the floor onto a chair. The camera makes a point to focus on some wire along the floor as Emily is being dragged. Emily is hand cuffed into the chair, proof of life photo taken and the two goons leave her alone. Of course, Emily has taken a wire and starts to loosen the screw of the arm rest.

Alec goes to the warehouse all dressed up like the other him and demands the guard to take him to see the girl. The guard does while Emily has let herself loose and taken out one of her guards. The other guard pulls out a gun on Alec as they arrive at Emily’s door. Alec tackles the guard but then bad ass Emily comes to the rescue and saves the day but does say her boyfriend was pretty badass for coming after her.

Kellogg shows the proof of life photo to Kiera and deal makings start to happen. Kiera realizes that Kellogg needs Alec’s help but because he burned that bridge, she can help rebuild it in exchange for Emily’s release. Just as it seems a deal is going to happen, Kellogg learns that some sort of encryption key is on the data and demands that Alec unlock or Emily dies. Kiera immediately calls Alec about the encryption but he isn’t there to answer the call Lucas is.

Outside the restaurant are Carlos and the VPD observing the meeting. Travis and Garza are there too waiting for the right moment to spring their plan into action to kill Kellogg and too bad so sad that Kiera will be caught in the cross wire. Part of that plan involves one of the servers who lights the candle at Kellogg’s table and once lighted it starts to smoke up. Kiera sees this and knows something is not right and Lucas manages to tell her that the smoke is a gas used in chemical warfare. Kiera manages to smash a window to freedom and immediately starts to drown Kellogg. Dillon and his guards immediately point their weapons on her but she tells Dillon to trust her as what she is doing is saving his life. Kellogg is saved and Kiera feels that he now owes her so asks for the release of Emily but Kellogg tells her the pleasure of kissing him while doing CPR is his repayment. 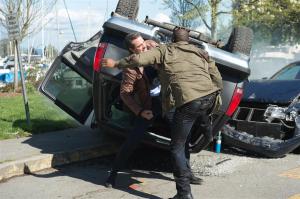 Victor Webster as Carlos and Roger Cross as Travis

As all of this is going down, Carlos notices Travis and Garza and immediately rams his car into their van. A fight ensues where Travis shoots several bullets into Carlos’ bullet proof vest. Just as Travis is about to kill Carlos, Dillon takes down Travis. Travis vows that the fight isn’t over and is taken away in a police ambulance. Carlos’ thanks Dillon for saving his life. Dillon tells Carlos that he can still do good things for people. Garza, of course, escapes the melee.

Kiera learns from Lucas that Emily is safe so now doesn’t owe Kellogg anything so walks away from any potential deal they were having.

As Kiera drives away, to no one’s surprise, Garza is in the back seat of her car. Garza wants Kiera to help break Travis out but the only thing Kiera wants to do is have a nice bath.

You know who is taking a nice bath at Casa Alec? Emily. Jason walks in and at first things are awkward. Emily thinks it’s because she is Jason’s mother in the future and asks him is this is the case. Jason at first doesn’t say anything but eventually shakes his head that Emily is not his mom. Emily is devastated at this news.

Back at Piron, Kellogg meets with Curtis to talk about why he got Liber8 to try and kill him. Curtis mentions how Kiera will return to her time and Kellogg is surprised how that is possible.

Kiera returns to Alec’s with Garza in tow who is surprised to see Lucas now part of Team Kiera. Kiera notes that there is nothing left of Liber8 so she might as well join their side. Alec then realizes that he has been going about things all wrong and the only way to beat Kellogg is if they all work together. Alec mentions also preventing Kellogg from time travelling, a statement that surprises Garza but he manages to pass it off. The group then settles in for a nice dinner but Emily suddenly leaves.

Alec follows her into their bedroom and Emily is backing. Emily tells Alec she is leaving because she can used once again against Alec so he would do Kellogg’s bidding. Emily doesn’t want to be Alec’s Achilles heel so leaves despite how she feels. Of course, we know she is leaving because Emily knows she has no future with Alec and needs to leave so Jason can be born. As Emily leaves, Alec is heartbroken.

Curious to see if Emily leaving will turn Alec evil or remain good. Hopefully we will find out in the next episode. Also, who do we think is Jason’s mother? Have we met her? Will we meet her before the series ends?