Iris takes over narration duties speaking about best friends and secret keeping.We get a scene with Iris visiting Barry in his lab telling him about Eddie being taken by the man in yellow and how the Flash was there who reassured her that he will find Eddie. We know that Iris is using this moment to see if Barry will tell her the truth that he is the Flash. alas Barry does not as he rushes off.

There is word of an attack at a gold repository, a case that Singh wanted Joe and Barry on. When the Flash arrives, a man in a gold mask opens fire on the gold bar van. When the Flash confronts the man, he gets stopped in his tracks as he starts getting visions on being experimented on and he scream in pain. The man gets away while the Flash is incapacitated.

When Barry returns to STAR Labs, Team a Flash wonders what could have happened, when Iris comes in and says hello to Barry or should she say the Flash.

Barry and Iris have a talk while Caitlin and Cisco listen in. Iris is of course very angry at Barru for keeping this secret from her, Barry says it was for her safety but she isn’t buying it. Iris is disappointed to learn that Eddie knows but gets more pissed that her father knew and told Barry not to tell Iris. During Thai conversation, Iris learns that Wells is the man in yellow and that he killed Barry’s mom

One thing for sure that The Flash is doing much quicker is having characters find out the main hero’s secret than Smallville did. It took several years for core characters to know. I take the moment Iris finding out to the moment Lois found out. Whereas Iris was pissed (and understandably so), Lois was not although we wouldn’t blame her if she was. I think the difference is that Lois was already in love with Clark and she understood why he didn’t tell her and knowing that he was the Blur just made her love him more. Lois waited for Clark to tell her his secret and even when it looked like he wasn’t, I think Lois would have stayed with him but lucky Lois, her man did willingly tell her his secret. I don’t know if Barry ever would have willingly told Iris but in the alternate timeline he did.Joe later visits Iris at Central Picture News, where she is doing some of her own research. Joe tries to explain his reasoning for not telling her that Barry was the Flash but Iris is having none of it as she felt she should have been told as she could have helped. Iris said she also should have been told of Barry’s feeling for her but Joe says that wasn’t his secret to tell.

Back to the case of the week. There is another robbery of the gold. Thanks to Joe, the gunman is taken down and when the mask is off we see it is General Eiling.

In the pipeline we see that Eiling isn’t quite himself and a team Flash learns that he has been mind controlled by Grodd, the gorilla that Wells and Eiling experimented on and as been effected by the particle accelerator. Brain scans of Grodd and Eiling show similar patterns. Joe thinks that it is not a coincidence that Grodd is on the loose the moment they started going after Wells.

Thanks to Iris, Team Flash figure out that Grodd is hanging out in the sewers of Central City as two sewer workers went missing. Joe, Cisco and Barry go down in the sewers and we see that Grodd has evolved over the last few months.

Grodd comes on the scene and takes Joe but not before Barry fires a tranquilizer dart at the gorilla. Grodd uses his mind control to make Joe point his gun at himself. Joe is terrified as he cocks his gun but Grodd gets him to release the gun. Joe then offers Grodd a banana but he hates bananas.

Barry returns to STAR labs as Grodd’s mind control made him useless. Tema Flash feels like they can’t come up with a solution without Wells but they will think of some thing. Meanwhile, Iris is upset that Grodd has his dad and she and Barry once again argue about keeping secrets. Barry them throws back at Iris how she has been keeping secrets too like possibly reciprocating his feelings.

The tranquilizer tracker goes off and Grodd is at a certain area of the subway tunnels. Cisco does come up with a headset that should block Grodd’s mind control. the Flash is waiting at a certain point where he can do a sonic punch but Grodd was waiting for it and starts throwing the Flash around like a rag doll. The headset comes off but the Flash manages to get it back on. It does work but the continued fight gets it to come off again. As a subway car approaches, Grodd’s mind control starts to work again but Iris’ encouraging words gets Barry to snap out of and to safety before the train comes. Grodd is about to attack again when a second train comes knocking him away. Barry then goes to rescue Joe.

As Joe recovers at STAR Labs, father and daughter reconcile. And Team Flash realize that they don’t need Wells to be a team and they include Iris as part of the team now.

Barry lets Eiling out as he is no longer under the control of Grodd. Eiling warns Barry how the pipeline won’t hold the meta humans forever. Also, Eiling knows Barry is the Flash but will keep it a secret since they have a common enemy: Wells. 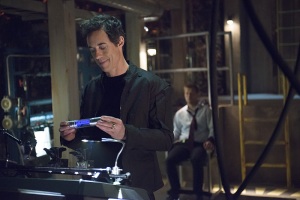 Speaking of Wells. He is still keeping Eddie prisoner and taunts him at how he is the failure in the Thawne family, how his police career was unremarkable and how he didn’t get the girl. Wells shows him the by line that shows that Iris married Barry. Wells says that Eddie won’t be needing he engagement ring.

Also, Grodd wasn’t killed by that train. Instead the gorilla breaks free of the subway tunnel and scales Vancouver’s Sun Tower as if it were the Empire State Building. If you think you’ve seen this building before, Smallville used it as Watchtower.

In the coda, we see Wells putting the finishing touches on a cylinder device that he calls a key to unlock something. Wells then climbs up a ladder and inserts this key in a ledge that lights up and a really long tunnel lights that we presume is the particle accelerator and that it is his ticket home.

Next week we get the team up of Al-Sah-Him, the Flash and Firestorm versus Reveres Flash and probably Captain Cold, Heat Wave and Golden Glider and… I could name all of the Rogues Gallery but I will stop.