A few recaps ago, when Oliver told Thea that he was the Arrow that I said everyone knew that he was Starling City’s vigilante. I got corrected that Lance didn’t know. Well after tonight’s episode, we can safely say that everyone and I mean everyone knows he is the Arrow, less people believe Roy’s attempt at saving Oliver at episode’s end. But I am getting ahead of myself.

Oliver and Akio are escaping Waller’s men when Oliver thinks he has run into Shado. Of course it isn’t Shado but her twin sister May (still played by Celina Jade). Because this strange man knows Shado, May offers to help the two hide.

When they arrive at May’s apartment, Oliver says his name is Tommy and notices a picture of Shado (whose picture displays her dragon tattoo) and Yao Fei. May asks how “Tommy” knows Shado. Oliver replies that he knew her whn they were in medical school. May thinks it odd as Shado never mentioned any American in her class. Oliver replies that he dropped out.

May lets Oliver take a shower and as he takes his shirt off, she notices that he has the exact same tattoo as his sister. After Oliver thanks her for the use of the shower, May demands to know the truth about Shado. Oliver can’t say anything and wants to leave. May informs “Tommy” that she called the cops on him. Unfortunately, Oliver notices the rifle lasers and knows it is Waller’s men that have opened fire on May’s apartment.

Thankfully, Maseo and Tatsu arrive and take care of Waller’s men and the Yamashiro family is reunited. Just before Oliver leaves, he tells May that her family is dead but doesn’t give the reason why just that they saved his life many times over. May thanks him for telling the truth and how it does take a load off knowing it.

Mama Smoak is back

What brings Mama Smoak back in town is to be there for her daughter Felicity after learning her boyfriend, the very handsome Ray Palmer was critically injured after taking an arrow for Felicity during Maseo’s attack on the mayor’s office that killed Mayor Castle.

As Ray is recovering, he gets some bad news. The doctor says that he has developed a blood clot but because he still weak from surgery that it would be dangerous to remove it. However, doing nothing might cause the clot to move to his brain thus causing a stroke. Ray suggest the hospital use nanotech that he has developed that can be injected to shrink the clot. Doctor Lockhart says the hospital has a policy against performing any experimental surgery.

Donna arrives to be there for her daughter, as mentioned, and seems to be more pleased that she has a boyfriend. Donna even tries to use her feminine wiles to change the doctor’s mind but alas she couldn’t. Donna encourages Felicity to grab the nanotech to use on Ray herself. Felicity as first is reluctant but Donna mentions that this would be something her father would do if he was there. Felicity tells her mom that if her dad were here, he would be arrested but she gets her point. From all the mentions of Felicity’s dad, it seems that she gets her tech smarts from him but he must have landed into some cyber trouble.

As Doctor Lockhart examines Ray, Donna hilariously feigns an injury/fainting spell to get him out of the room. When alone, Felicity injects Ray with the nanotech that does work.

The doctor shows Ray’s MRI that the clot is all gone and wonders how that can be. Donna doesn’t like the accusatory tone so Lockhart backs off.

As Ray recovers, he thanks Felicity for saving him. She replies that all the did was stick something in him. Felicity, embarrassed, ask if she will ever say anything that doesn’t have a double entendre. Ray says he hopes not as it is one of the things that he loves about her. Felicity is stunned at this revelation, starts to babble but never says it back.

When Felicity leaves, Donna knows something is hope and at first hopes that her daughter had hospital sex with Ray and had always wanted to do it herself. Felicity is disgusted at the TMI and says that Ray told her he loved her. Donna knows Felicity didn’t say it back. Felicity wants to know what is wrong with her as Ray knows all Doctor Who episodes from all 34 seasons, is a tech genius and looks like a Disney prince (can’t argue that one). Donna says that it is because she is in love with Oliver and that she needs to choose where her heart really lies.

Everyone Knows Oliver’s Secret (except Donna Smoak, who doesn’t like to watch the news)

Because of the murder of the mayor and the attack on Ray, Lance has issued a warrant for the Arrow and his accomplices, which includes Arsenal (Roy) and the Black Canary (Laurel).

Laurel tries to get her dad to back down but he won’t.

Oliver turns to Nyssa to get some help in tracking where Maseo and the League might be hiding out. Nyssa only helps out for Sara and tells Team Arrow a possible location, an abandoned office building.

When Team Arrow arrive where Ra’s once again offers Oliver his position and once again he turns him down. There is a brief showdown on a rooftop with the League until the cops show up. The team escapes down the roof top and they disperse. The Black Canary gets cornered by her dad but Nyssa helps her escape. Ray is being chased by cops and gives three of them flesh wounds so he can escape. Oliver, thanks to Diggle, manages to escape too.

Other things of note that happened before all of this is Roy and Thea are back together.

Back to the action, outside of police headquarters, Lance is taken by the League. Lance knows that Ra’s is responsible for his daughter’s death while he says the saved her from Lian Yu. Ra’s then tells Lance that Oliver is the Arrow and knowing that everything should fall into place about Sara.

Before the police arrive at the club, Roy tells Thea that he wanted to be arrested to atone for what he did to the cop last season. Thea tells her boyfriend that what happened to the cop wasn’t his fault. The police do arrive and Oliver manages to escape to Diggle’s.

Rest of Team Arrow arrive and wants to know what is the game plan. Oliver doesn’t really know because last time he deliberately got himself arrested and dressing Diggle up in the Arrow suit is out of the question. Unfortunately, Lance has closed all points of exit and froze Thea’s assets so it will be very difficult for Oliver to run. 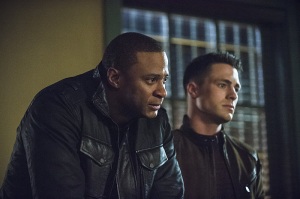 So Oliver goes to the only place he can: the SCPD. Oliver turns himself in. Diggle, Roy and Felicity visit him and says he is crazy for turning himself in. Oliver says that they’ve trusted him so far in this journey that he wants them to just trust him some more.

At the Arrow Cave, Roy wants to do something and we learn what that something is as Oliver is being transported, probably to prison. In the ride, Lance lets it all out to Oliver about Sara when the transport van is hit with an arrow. Oliver tells Lance that he told his team to stand down. When Lance opens the van door, Roy is in the Arrow suit and tells the cops that they got the wrong man that he is the Arrow.

We get next week off but that’s our last one till the season finale.