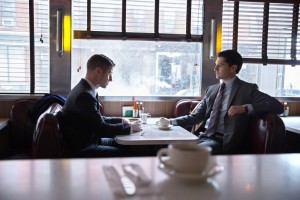 Tonight’s Gotham has to be, hands down, the most disturbing episode of the season, more disturbing then Barbara hanging out with tween girls.

Fish is recovering from taking her eye out. It seems that she has only been out for the night but seems to be a ok. Fish meets Dr. Francis Dulmacher (Colm Feore), the head of the facility. The basic premise of their conversation is that Fish wants to be come Dulmacher’s new right hand man and even cites being Falcone’s top lieutenant as qualifications. Unfortunately, for Fish, the name means nothing to Dulmacher but he does point out that they replaced her eye but couldn’t get her original eye colour. When Fish removes her bandage, we see that her left eye is now blue.

Dulmacher takes Fish on a tour of the his facility and meets a patient that came in for a kidney transplant but threw in a facelift. As they make their way throughout the facility, Dulmacher shows Fish what he did with his now ex-office manager: he has been Frankensteined with different body parts that include breasts and a female hand. This was the disturbing part of the episode.

It seems that Dulmacher is going to test Fish and returns her to the dungeon where the people there start to question Fish’s loyalty. The prisoners let theyr hostage go and when it looks like the prisoners are safe, Fish turns on them and lets her dungeon right hand be taken upstairs and she tells her new followers that sacrifices had to be made to ensure their survival but the promises she made she will still honour. It seems this has earned Dulmacher’s trust of Fish and shows her that they are in a mansion on an island surrounded by water, which means there is no chance for escape, thus ensuring her loyalty. This storyline actually makes me miss the mob stuff that Fish was connected with. This plot is a bit too gory for me that would probably make stop watching Gotham.

The Riddler Gets his Heart Crushed

Nygma is still trying to woo Kristine Kringle and thinks he has a shot when she says that she has no intentions of getting back together with a newly exonerated Flask (more on that later) and even caresses his arm briefly. So Nygma, with flowers behind his back, asks Miss. Kringle out for dinner but unfortunately, she has plans with Tom, another cop. But Tom seems nice and even asks Nygma a riddle. After the two leave, Nygma crushes the flowers and tosses them out.

Alfred Recovers and Bruce is on the Hunt

Gordon goes to a recovering Alfred to see who attacked him, Bruce is about to say it was his old friend Reg but Alfred doesn’t give up his friend. After Gordon leaves, Bruce wants to know why Alfred covered for his friend. Alfred explains that you don’t turn on your mate. Alfred then attempts to get up and leave the hospital to get to the bottom of Reggie’s betrayal but after struggling to do so, Bruce insists he get back to bed. I find it hard to believe that Alfred would be ok after only being stabbed from the night before so it was good to see that he didn’t just get up and walk away. As Bruce reads to a sleeping Alfred, Selina drops by to visit and offers Bruce a comforting hug. Bruce tells Selina who did it and believes that Reggie stole some files related to his investigation of the Wayne Enterprise board. Bruce says he is going to figure out what is going on and Selina offers to help. Bruce turns her down as he doesn’t want anyone else to get hurt because of him.

Gordon is pissed to find out that Flask got all charges dropped on him because of a new witness that came forward to Loeb. This witness happens to be Bullock who says he falsified evidence. When Gordon confronts Bullock on lying, he says that Loeb has something on him so he had to lie. Apparently, Loeb has something on every cop to use as leverage. Bullock says that everyone has a Cobblepot, meaning a cop was ordered to kill someone on mob’s or Loeb’s orders, if I am interpreting it correctly.

Gordon goes to Dent for help and the two question Loeb’s old partner, Griggs, who gives up a name of a Chinese bookie. When they go to this bookie’s restaurant, it was all a setup so Dent and Gordon flee and are only saved by Bullock. Bullock manages to get Griggs to say that Loeb is cahoots with Falcone. Bullock and Gordon realize that they need to talk to someone close to Falcone to find out where Loeb stashes his blackmail files. Gordon knows that the Penguin can help and go see him at his club.

Gordon promises the Penguin that he owes him a favour and that he can have five minutes in the file room. So the Penguin takes them to a farm house where a kindly couple take them inside for tea and cake. This couple have been hired by Loeb to take care of the house 20 years ago. Throughout their tea time, a lot of noise is heard upstairs but the man says it is just raccoons. But this couple are no dummies and no something is up so a brief gun fight happens that Gordon and Bullock manage to take down the couple. As the two cops investigate what is in the attic, the Penguin stands guard on the couple.

In the attic, Bullock and Gordon don’t find files but a woman, Miriam Loeb, Commissioner Loeb’s daughter. Miriam clearly has a mental illness and has been locked in the house for 20 years but her father visits every Sunday. The two men learn that Miriam actually was the one to kill her mother, Loeb’s wife, a crime that was rumoured to have been caused by Loeb but never proven.

A noise is heard downstairs and the couple overpowered the Penguin and escaped. We later see that the Penguin didn’t get overpowered but the couple works for him. At the Penguin’s club, he tells the couple that Falcone won’t be pleased for their ineptitude and says he only has one train ticket to Arizona and gets the couple to fight for it. The man says he hasn’t been part from his wife for 20 years so refuses to fight but his wife has no qualms and kills her husband. Alas there is no trip to Arizona as the Penguin just shoots her dead. I found this part disturbing too with the violence that the wife enacted on her husband.

Later on, Gordon uses the existence of Miriam as leverage against Loeb to get things that he wants. First off, Gordon only manages to get Bullock’s file but does get Loeb to try Flask honestly and also get Loeb to support him as a candidate for the president of the police union, a position that Loeb initially was going to give to Flask.

We won’t have a new Gotham until April and I have to say I am concerned over the lack of Montaya and Allen. The two haven’t been seen in like forever and have a feeling that these two characters are going to be dropped for season 2 probably along with Barbara. Also, we have had a serious lack of Morena Baccarin that I hope gets rectified soon,