Tonight we finally got to learn more about Dr. Sydney Katz and it is about time. I was starting to get worried they were really under-utilizing Stacey Farber, whom I’ve been a fan since her days as Ellie on Degrassi: The Next Generation.

So let’s start with Dr. Katz.

Alex and Maggie are treating a lesbian couple, Ruth and Nashama, from Montreal. Nashama is 33 weeks pregnant and has a possible appendicitis. There is also an issue with the baby, who has a condition where its lungs isn’t able to fully form properly so a balloon had to be inserted in its trachea to help the lungs develop.

As Alex and Maggie examine Nashama, Katz comes into check on her and it is very obvious that Nashama and Katz have a very contentious history as Nashama refuses to be treated by Katz.

Nashama then starts to feel abdominal pains and there are fears the appendix might have burst. So Alex and Maggie go in to remove the appendix, which is a success.

As Nashama recovers, her water breaks and her baby needs to be delivered. But Ruth says it is too early as the lungs haven’t full formed yet. But Maggie says there is no waiting and they need to first pop the balloon in the trachea and once the baby is delivered will put it on a ventilator. The catch is Katz is the best person for the surgery. Nashama refuses and rather fly in her doctor from Montreal. But Nashama is made to see reason that Katz is her best chance to save the baby.

Nashama is awake for the surgery albeit a bit loopy from whatever was given to her. It is revealed that Katz blabbed to Nashama’s parents that she caught their daughter kissing a girl. Nashama’s parents performed a the Jewish ritual of a Shiva effectively declaring their daughter is dead to them. Katz manages to deflate the balloon and is ready to deliver the baby but Nashama refuses to have Katz touch her baby. So Maggie is tasked to do so but the baby is breech. Katz apologizes to Nashama for blabbing and blames her youth for that indiscretion. Nashama lets Katz deliver her baby, a girl, whose lungs seem okay. We later see Nashama and Ruth enjoy their new daughter.

In the doctor’s lounge, Maggie tries to console Katz, who feels extremely guilty for betraying Nashama and blames herself for Nashama being shunned. Maggie asks about her upcoming wedding to Hershel. Katz tells Maggie that she doesn’t understand the pressures of being Orthodox and tells her how Hershel would declare his intent of wanting sex (he would throw his yarmulke on the bed).

But since Katz kissed Maggie, we suspect her next confession: she had a crush on Nashama when they were teenagers and was jealous of seeing her kiss another girl. But Katz decides to stay in the closet for now.

Later, in the on-call room, Katz admits to Maggie that she likes girls and the two start to kiss passionately. And so much for me thinking that Maggie was going to hook up with Dr. Dey.

Joel is trying to write a speech introducing his father, Dr. Barrett Goren, who is receiving the Bernard Taylor Award for his stem cell research. When Alex sees what he has wrote, it nothing much.

Joel goes to the Royal York Hotel to meet his dad for lunch. When Joel goes up to his room, a woman opens the door and Joel and the audience thinks that she is an escort. However, it turns out she was a massage therapist. While on their way to lunch, Joel asks about his 26-year old step mother. Barrett replies that they are getting a divorce. Joel is not surprised to hear this news and says that makes 5 failed marriages.

Barrett all of a sudden starts to feel abdominal pain and collapses near the St. Andrew Subway station (at least I think that was it – I used to live in Toronto). Joel goes searching for his dad’s insulin (he has Type 1 diabetes) but he says that he doesn’t need insulin as he has been cured. Joel grabs a taxi and heads to Hope-Zion.

Alex is there to meet them. Barrett is surprised to see that Alex is pregnant and tells her that Gorens make terrible fathers and that Charlie is one lucky man. Joel tells Alex that he didn’t his dad about the baby because the uncertainty in paternity.

We learn that Barrett has pancreatitis and his pancreas is completely black. Alex has to go in and remove all of the bacteria and hope it doesn’t spread and shut down other organs. Alex also informs Joel that his dad’s blood sugar levels are normal and they’ve taken several tests.

Joel then realizes that his dad used his stem cell research to test on himself to cure his diabetes and lectures his dad on the dangers. Barrett tells Joel that he is just like his mother. Joel doesn’t want his dad to bring up his mom again since he was the one to abandon them. It looks like Joel and his mom are pretty close.

Before going into his surgery, Barrett needs to complete his award speech and wants Joel to deliver it but he refuses. Barrett then asks Alex, who agrees despite her not being good at public speaking.

As Barrett is being rolled into surgery, Barrett gives Alex money for the baby as he believes Joel will do nothing. Alex tries to refuse but Barrett insists.

At the awards ceremony, both Alex and Joel are surprised to see each other. Joel also tells Alex that he knows his dad gave her money for the baby. Alex says that she isn’t keeping it. 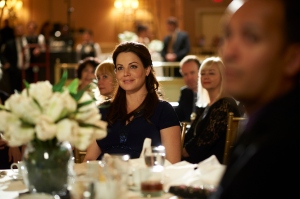 The ceremony starts and Joel starts to give the speech that his dad wrote (something about Greek or Roman mythology) but puts it away and instead shares a story about the first time he saw his dad in his element and how he was a good, generous, kind doctor. Joel then announces that his dad has donated the prize money to start a street clinic at Hope-Zion. Joel thanks his dad for that generous donation on behalf of Selina.

Afterwards, Joel knows that his father wasn’t the best. Alex agrees and says her parents weren’t great either. Joel continues on to say that he doesn’t know if he will be good either but he knows he wants to be a father to Alex’s baby.

I was a little fearful that Alex might consider getting back together with Joel with that speech and they way the two were in this episode, I feared it might happen until I understood the point of Charlie’s storyline tonight.

Charlie is treating Iris Pratt (Janet Leigh Green) who has come in with a torn rotary cuff. Her grandson, Cameron, is with her. Iris likes to play tennis but Charlie says it isn’t a tennis injury. Iris explains that she was just clumsy and fell.

When Charlie goes through her MRI and x-rays with Zach and both see several hairline fractures. Charlie, and me, suspect elder abuse. The suspicions are heightened after Charlie talks to Cameron, who seems agitated at his grandmother for not being careful when running after the phone.

Charlie goes to talk to Iris about his suspicions but only after Cameron leaves the room. Iris denies it and just says that she is clumsy and that Cameron needs her. There is a commotion outside with Cameron yelling at other patients demanding a phone and gets quite aggressive and is taken away into the psych ward. Dr. Dey tells Charlie that Camera is manic depressive and is supposed to be taking lithium to help his condition. Dey also tells Charlie that Cameron has no history of violence. Charlie wants to call social services but Dey thinks it is better not to separate Cameron from his grandmother.

During Iris’ surgery to repair her rotator cuff sees that the bone is thin and spongey. Charlie suspects something and gets a toxicology screen done on Iris and asks Dey to come to the surgery. Charlie informs Dey that Cameron has been giving his grandmother his lithium that causes bone loss and clumsiness. This convinces Dey to commit Cameron.

When Iris wakes up, Charlie tells her about Cameron but Iris refuses to give up on her grandson and he thrives under her and wouldn’t if he stayed with his mom. Dey eventually allows Iris to see Cameron and grandmother and grandson have a sweet reunion.

Throughout Charlie’s storyline, a spirit named Henry needs his help in finding his body. Each time Henry thinks he has found his body it turns out to be wrong boy. The two go to the morgue to see if his body is in there. They go and take a look at the last door but Henry feels his heart beat and goes to reunite with his body and eventually his family and friends.

However, Henry is outside a surgery where a girl is receiving his heart. Charlie tells Henry the bad news that he died, Henry doesn’t know what to do or where to go and is sad that he will never see his parents again. When Charlie mentions that Henry has done the greatest thing someone could do and that is be an organ donor, this allows Henry’s spirit to be at peace and leave.

Without revealing the identity of the donor, Charlie gather the girl who received Henry’s heart and the two boys that got his kidneys together to talk about how their donor was a great guy and his favourite baseball player was Derek Jeter. It seems the tree kids might know Henry and are thankful to him for giving another chance at life.

Alex sees all of this and looks especially moved when Charlie starts to play Go Fish with them.

And from the look on Alex’s face, she sees that Charlie would make a great dad and she might just be falling in love with him again.

So it seems that some of you think that Charlie would make a great dad too!

Let’s hope that Charlie isn’t committed to the psych ward based on next week’s episode.