In its young second season, tonight’s Marvel’s Agents of SHIELD is one of the best as we find out what really happened to Simmons, Skye really becoming a full SHIELD agent and we get the return of Daniel Whitehall.

And that is where we open the episode with Whitehall going Clockwork Orange on an Agent 33, a young SHIELD agent that Whitehall is trying to brainwash to get her to comply and be part of HYDRA. That word “comply” becomes the word of the episode.

We then find ourselves in Simmons apartment as she goes through her morning routine before arriving to work at a HYDRA lab – as we see this we all yell WTF Simmons.

Back at the Bunker, Skye is going through target practice with May teaching her about always being in control in every situation so that she maintains a constant heart rate of 65 beats per minute. Hunter and Mack come in and wonder if Skye every graduated from SHIELD Academy as they have a bet on it with the loser having to count the Bunker’s inventory. Skye says she never went to the academy so Hunter loses. Skye realizes that Hunter wants to know because he is curious as to whether or not she has killed anyone. Once Hunter leaves, May tells Skye that going to the academy doesn’t make it easier to kill someone.

May then notices that Coulson has returned to the Bunker in a pretty bad news. Coulson wasn’t able to find Agent 33 and believes that HYDRA has her and he has grown tired of HYDRA taking their best.

We then switch back to Simmons at the HYDRA lab going over her blind test results to her supervisor. Simmons notices that the file her boss was writing in is for Donnie Gill, the young SHIELD academy recruit from last season who designed a killer weather machine. Donnie project is code named Blizzard (his name in the comics).

When Simmons returns home later that night, she isn’t alone as she encounters Coulson. We learn that Simmons is working undercover at HYDRA kind of like Ward did within SHIELD. Over dinner, Simmons lets Coulson know about Donnie and how he acquired freezing powers after the destruction of his weather machine. Simmons then asks about how the others are doing. Coulson says that Fitz is hanging in there and then asks if Simmons is making any friends as that is going to be a very important part of her cover.

As for Donnie, he is hiding out in Morocco but he is confronted by HYDRA agents and gets agitated that he freezes the agents and the cafe owner. Before Donnie takes off, he sees “Maribel Del Mar” on the cell phone of one of the agents. Donnie makes his way there and freezes the ship and all its crew so that HYRDA won’t get to him.

At the Bunker, Coulson briefs his team about what Simmons shared with him but without revealing his source. Coulson calls upon Fitz about what he knows about Donnie and of course, Fitz struggles with his words. When Fitz asks where Skye is, May tells him that she is elsewhere.

That elsewhere is interrogating Ward to find out what he knows of HYDRA’s method of recruiting gifted. Ward says that they try and convince them to join and if they can’t they take them out as them being gifted is a risk to HYDRA.

The team find out that Donnie is in Morocco and take the Bus. Left behind are Fitz and Mack, who seems to have become Fitz’s babysitter.

Back at HYDRA, Simmons is asked to be seen by some HYDRA higher ups and she is questioned by Bakshi, Whitehall’s right hand man and Creel’s contact in the previous episodes. Bakshi is not pleased that Simmons withheld that she was a SHIELD agent and that she knew Donnie. Simmons proclaims her loyalty to HYDRA and it seems that Bakshi believes her. 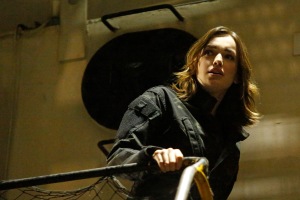 However, Bakshi goes to Whitehall to ask permission to take Simmons somewhere to test her loyalty. Meanwhile, Whitehall is still trying to brainwash Agent 33 who briefly managed to get one of her hands free until Whitehall catches her and the brainwashing continues.

So where is Bakshi taking Simmons why to Morocco so she can talk Donnie into joining HYDRA. On the Maribel, Simmons finds Donnie and uses their prior relationship to bond with him. It seems to work for bit but when Donnie gets agitated, Bakshi gets Simmons to say some words that include comply to try and calm Donnie down.

Meanwhile in the Bunker, Fitz wants to know what people are keeping from him and ventures down to where SHIELD is keeping Ward. Fitz finds Ward and their encounter is a bit heartbreaking for Fitz as he sees the man that is responsible for his current state. Ward is apologetic but tells Fitz that Garrett wanted to him to put bullets in their heads but he chose to let them escape to save them. But Fitz is pissed that what he did has caused him to be who he is now and wants Ward to experience the same thing as he starts to lower the oxygen in Ward’s cell. As Ward starts to have difficulty breathing, he finds out that Skye is out in the field to capture Donnie and has information that will help the team.

As our SHIELD agents make their way with the Maribel, Hunter finds Simmons talking to Donnie and is about to take her out when May notices that it is Simmons and shoots Hunter in his bulletproof chest to stop him. This frightens Donnie who tries to freeze Simmons but only manages to freeze her jacket so she escapes but Donnie is right behind her. All of this happened because Coulson ordered May to maintain Simmons’ cover (so May knew about Simmons).

Fitz manages to deliver what Ward told him to Coulson (who is a little miffed that Fitz knows about Ward). Basically, Donnie was already turned but his brainwashing didn’t quite take but HYDRA is going to use keywords to get it to take again. So when Simmons runs into the arms of Bakshi with Donnie not far behind, he uses the keyword that eventually works. First order of business is for Donnie to freeze the entire ship so no one gets out alive.

So Hunter and May are trapped inside but Skye manages to take out Donnie who falls into the ice and waters below. Baskhi, Simmons and the rest of the HYDRA agents escape but leave behind a ton of HYDRA booty that our SHIELD agents take. When Skye made the shot to kill Donnie, we see that her heart rate never elevated.

On the Bus, Skye is a bit peeved that May knew that Simmons is undercover at HYDRA and worries about her since she is a terrible liar but May believes in her as she believes in Skye. I swear that if May doesn’t end being her mother I am going to be pissed. I have been theorizing this since the beginning and I am so getting a mother-daughter vibe with this relationship.

When Coulson returns, he shares his disappointment in Fitz almost letting Ward die but agrees that he doesn’t like having him here but it is necessary to understand HYDRA. Coulson also tells Fitz that Simmons is on assignment for him but doesn’t answer whether or not Simmons left on her own free will or ordered on this mission.

Back at HYDRA, we see that Agent 33 has been turned and that Bakshi wants to move Simmons upstairs to use her talents better. Whitehall asks Bakshi if he trusts Simmons, he says he does but if he is wrong they will get her to comply i.e. brainwashing – I sure hope not! We don’t need another SHIELD agent to turn but if that is where they are going with this, I think it would be pretty romantic if Fitz is the one to unturn her.

In the post credit scene, we see Skye interrogating Ward again. Skye wonders if Ward has been brainwashed but he says no he wasn’t. Ward will never lie to Skye and thenr reveals to her that her father is alive and looking for her. Skye doesn’t want to listen anymore and leaves and we see her heart rate skyrocketing to above 100.

Is Ward starting to becoming redeemable? And Brett Dalton looks mighty fine with that beard! So what do we think of SHIELD so far in its sophomore season? Let me know in the comments.