Alex is awake but unfortunately has some memory problems and is also quite confused as Charlie and Joel try and calm her.

Later, Alex is moved to her own room and Gavin is there to do an assessment. Unfortunately, Alex can’t remember Gavin either but he helps her fill in some blanks in particular that her frequent visitor is her ex-fiancee Charlie. Alex remembers what her medical condition is and means but wishes she could remember how she met Gavin. Gavin shares how they met as he leaves the room.

Gavin tells Dawn and Charlie that Alex just needs time and that her memory will return. Dawn suggests that Alex start to walk to prevent thrombosis Before any more ideas get Charlie gets called to an emergency. Charlie sees Ian’s spirit hovering over Alex’s bed.

Maggie is emotional over getting her first period since her miscarriage and Katz is there to be a hear for her. Maggie’s get further emotional when she is tasked by Zach to delivered some bad news to a patient but she breaks down and walks off. Zach offers some comfort like sharing how his ex-wife coped with her miscarriage and tries to offer some exercises to help but Maggie is having none of it. Maggie tries again with Carl but starts to laugh and takes off again. This time Gavin is there and wants to comfort Maggie but she gets pissy with him. I wonder how long Gavin is going to be on this show (and judging from next week’s previews, it seems that Gavin goes over the deep end) as he is no longer listed amongst the series regulars. Plus, I believe there is a new psych doctor joining the show.

Later, Maggie gets Zach to tell Carl the bad news that he has something that is battery operated stuck in his rectum.

Maggie then gets advice from Reycraft that is less than useful but finally receives some helpful advice from Dr. Katz. Katz tells Maggie that she should stop blaming her hormones but the fact that she went through something pretty emotional. Katz suggests that she write a letter to her unborn child about her hopes and dreams for him/her. We see Maggie do that and packs away in a box, the letter, the sonogram and some baby clothes and toys. And can you believe that Stacey Farber, who plays Dr. Katz is 27! I remember Farber was on Degrassi as a teen.

A condo explosion brings in tons of burn victims including a man and a woman fused together from some heated insulation. The man is the building’s electrician, Marshall, and the woman is the architect, Anna. It seems they were in the wrong place at the wrong time. Charlie and Joel argue over the best course of treatment but Charlie is called away and Dana takes over and the same debate ensues. The situation 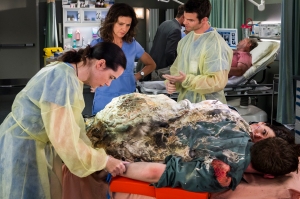 Dana (Wendy Crewson) and Joel (Daniel Gillies) have a consultation

becomes dire when Marshall can’t feel his legs anymore. Joel asks Charlie for some help but is more combative to him so he goes to Dana instead. Surgery is the next source of action. Anna wants to go first (but can’t) and starts to panic. Marshall comforts her and when he can’t feel his hands, the situation gets worse. So Joel goes to Dawn on who should take charge of the surgery, Dawn eventually sides with Charlie, pissing Joel off.

During the surgery, Anna is awake and before going under offers some words of encouragement to Marshall. It is also revealed that Anna and Marshall are a thing despite Anna saying she had a boyfriend. However, things go south as Anna starts bleeding out. The surgeons separate them with Joel’s help. After they separate Anna and Marshall, Charlie notices the good mood that Joel is in. Joel attributes it to his visit to Alex and tells Charlie that despite her memory loss, she will be okay. Affronted at what he hears, Charlie tells Joel that maybe he should give Alex some space. Joel then notices something protruding from Marshall’s back and they see it is an engagement ring. Apparently the question that Marshall asked was THE question and Anna said no. Later on, Anna and Marshall are okay and Charlie gives Anna the engagement ring. It is unknown whether or not this situation will bring her to say yes.

Dawn is checking up on Alex and suggests that Alex walks to the nurses station. We see Alex still frustrated at her memory loss. When Alex does go for a walk, she encounters a fellow patient, Marisol, who sees Alex struggle. It would have been cool that she was dead but alas people can see her asks charlie for some space. Later Jackson takes her on a tour of the hospital on the way to the ER and recaps her on all the gossip at Hope-Zion. They encounter Marisol who is up the wall and itching to get discharged but Dawn won’t let her go. Alex wonders what the gossip on her is and Jackson says that could take all day. Jackson makes a pit stop and when Alex tries to get up, we see Ian’s spirit reach out to Alex when she collapses and Charlie is there by her side. Alex once again wants Charlie to give her some space.

Joel visits Alex and this visit goes over better. Joel tells Alex three things about her. Two will be true and one not. Joel mentions two things that happened over season 1 and 2 and one falsehood. Alex doesn’t get it right but Joel still gives her the prize of writing her life on one piece of paper and places it at at the hospital cafe for her to walk to. It seems that Alex has taken a liking to Joel despite the fact knowing that they were once a couple. I think this is going to be bad news for Charlie for season 3.

Alex has made her way to the cafe to retrieve Joel’s note and see Marisol there who is finally discharged but not feeling well. Marisol collapses and Alex pulls out her IV and goes into Dr. Reid mode and remembers everything and gets the help Marisol needs. Dawn later checks on Alex and Alex tells her she remembers her and thanks her for saving her life. The two share a sweet moment together before parting ways.

We also learn in this episode that Dawn and Reycraft are a thing as we see the two make out in the elevator.

Later that night, we see a happy Joel with tons of balloons and a pinata go and visit Alex but is stopped short when he sees Charlie there sharing a tender moment with Alex. Joel hands off the gifts to a passerby and walks away.

In Alex’s room, Charlie explains to Alex how she was with him while she was in the coma and asks if she remembers any of that. Alex says no. But Alex says that while she remembers their life together, it seems that she isn’t ready to move on and asks Charlie to have this discussion the next day. Charlie agrees and tells Alex he loves her but Alex remains silent.

Outside of Alex’s room, Charlie sees the spirit of Ian who tells him that Alex is not alright.

So who do you want Alex to be with? Joel or Charlie? I personally want Alex to be with Charlie as the show’s initial premise hinged on their love story. And plus I don’t know how long Daniel Gillies can be lead characters on two shows that film at the same time. One show has to give and I think it is going to be Saving Hope.

Share with me your thoughts on this love triangle.