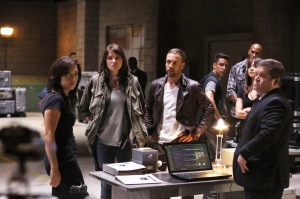 After a recap of last few episodes of season 1, season 2 opens up in Austria 1945. We see HYDRA agents raiding a site to search for an obelisk that seems to have killed the inhabitants in a cruel way. Two HYDRA talk about said object when all of a sudden Agent Carter (Hayley Atwell) and two of the Howling Commandoes Timothy “Dum Dum” Dugan (Neal McDonough) and Jim Morita (Kenneth Choi) come in to take them down and seize all of the treasures found including the obelisk. Carter labels the obelisk as an 084 for the SSR and mentions that Stark wants to study it.

Back to the present day in Alexander, Virginia, we see Skye rappel down for a mission. This is were we see Isabelle Hartley (Lucy Lawless), Lance Hunter (Nick Blood) and Agent Idaho are meeting with an ex-SHIELD agent called Browning (Matthew Glave) who wants to sell them the 084 that we saw at the beginning. All Browning shows is just a picture of the 084 and Hunter and Hartley just don’t want to hand over a briefcase of cash based on a picture. But the deal doesn’t go down because a third party crashes the deal and kills Browning and makes off with the file folder about the 084. Hartley plugs bullets into him but it bounces off him. Skye, Tripp and May show up to join the party much to the chagrin of Hartley et al.

When Hartley calls in to say that HYDRA has possibly crashed their deal and asks what are their orders now. We see Coulson tell them to go dark.

The team return to the Playground where we meet some new recruits like Mac (Henry Simmons) and Billy Koenig (Patton Oswalt). We also Talbot (Adrian Pasdar) making the news rounds and is talking to George Stephanopolous about how he has taken down SHIELD and HYDRA.

As the team returns, Koenig tells May that Coulson wants to talk to her and Skye works on discovering what the material is found at the mission site.

At May’s meeting with Coulson, she learns that Coulson is working at trying to recruit loyal SHIELD agents and is about to leave for London when she sees what Browning was going to sell and notes to May that it is the very first 084.

Meanwhile, we see the third person enter a truck and meets a HYDRA agents who pays him with a rare diamond and we see this man absorb the diamond and his hand becomes a diamond.

Later, we see Simmons encouraging Fitz to discover the source of the material found. But Fitz is obviously not the same and is forgetting a lot of words with Simmons trying to help out. When May comes to ask what Fitz has found out but he has found nothing that is until the material starts to turn to flesh and bleed out.

At a meeting with Coulson, Hartley, Hunter and Idaho, he wants to know more about this hit man when May comes in and IDs him as Carl Creel. They all learn that he was one of Garrett’s recruits and presumed dead.

Coulson goes to Skye, who has been tasked to make sense of the alien symbols that Garrett (and Coulson) have been writing, to ask her to speak to Ward about what he knows about Creel.

During his whole time in captivity, Ward has stated he will only talk to Skye. So when Skye does talk to him, we learn that Ward was hurting himself but stopped. Skye just wants to get to the point and shows Ward a picture of Creel.Eventually, Ward tells her all he knows about Creel and how he can absorb any material he touches and that he likes it. Ward then tells Skye how HYDRA communicates and that Creel will possibly get orders that way.

Koenig confirms Ward’s intel is good. Ward wants to say more to Skye, especially about her dad but she walks away before he gets to say so. Coulson tells Skye that they kept Ward so they can get HYDRA intel.

When the team sees a directive come in for Creel, Coulson realizes that Talbot didn’t take down HYDRA but just pushed them into hiding just ready to pounce.

Coulson realizes that Talbot is Creel’s next victim and the team goes to DC to try and protect him. When Coulson calls Talbot to tell him so, the Brigadier General is having none of it. However, Creel does show up and May takes him on while Talbot’s back up arrive on the scene. Skye uses the night night gun and Creel is down for the count.

Talbot is taken to safety but is actually taken in by May and company.

Back on the Bus, Coulson is interrogating Talbot and the two argue about how SHIELD is the good guys and they are here to help. They get Talbot to do certain things in order to obtain his fingerprints.

Looking on is Fitz, offering his opinion to Simmons on what the team should be doing like grabbing Talbot’s vocals. It seems that Simmons and Fitz have grown closer over his order as seen by the reassuring shoulder touches. Fitz tells Simmons that her presence makes him believe that he is getting better.

Back in the interrogation room. Coulson tells Talbot that Creel got exactly what he wanted and that is to be captured by the government so he can be at the same facility that contains the 084. And we see that Coulson is right as Creel uses his absorbing power to blend into his cell and this allows him to escape.

Coulson uses the night-night gun on Talbot and we see Talbot wake up and immediately calls in a directive to be rescued and get backup. However, this call went to Koenig so they can capture the secure code for their mission.

This mission involves breaking into that government facility to get the 084. So on this mission is May, Skye, Tripp, Hartley, Hunter and Idaho. They break in by pretending that Tripp is a general going to meet Talbot. Coulson pretends to be Talbot to get Tripp and company in. And then use Talbot’s finger prints to get into the room of SHIELD and HYDRA artifacts.

The team split up to find the 084, which Hartley does but Creel comes upon her. Hartley then grabs to obelisk to use on Creel and wonders why the object is so bad. But as soon as Hartley grabs on the obelisk she writhes in pain and her left hand starts to turn black and Creel runs off. The rest of the team arrive and May asks Coulson should they abort in light of Hartley. However, Coulson says no, they will proceed with their mission. But Hunter is aborting and he takes Hartley and gets Idaho to drive them to a hospital.

The mercenary team drives away amongst gun fire but make it out. Hartley knows she is dying and asks Hunter to cut her arm off that is holding the obelisk as it is the only way she will survive. Hunter does so but Creel comes upon them and takes their car down. Dead are Idaho and Hartley. Hunter pretends to be dead as we see Creel walk away with the obelisk by turning his hand to rubber so he can handle it safely.

Meanwhile, Skye, Tripp and May are successful in their mission to grab a stealth plane

Back at the Playground, Coulson says getting that plane is important because even though Fitz is working on repairing the stealth on the Bus, he hasn’t been the same since Simmons left. To my surprise, Fitz sees visions of Simmons as she isn’t there. Coulson says that Fitz’s temporal lobe is still badly damaged and hasn’t been the same since Simmons left and has been seen talking to himself constantly. Coulson says that what SHIELD is now is hiding in the shadows secretly helping people.

In the post-credit scenes, we see the HYDRA agent talking to Creel speak to his boss about the obelisk and refers to him as Dr.Whitehall (Reed Diamond) and we see that he is the HYDRA agent that we saw at the beginning of the episode.

So ends episode 1. I am quite surprised that Lucy Lawless was only in one episodes as I thought that she was recurring. Also, I thought the would add Tripp as a series regular but they added Lance Hunter instead. I hope Simmons does come back to help Fitz and I wonder how long Ward will be kept prisoner. All will be revealed as season unfolds.