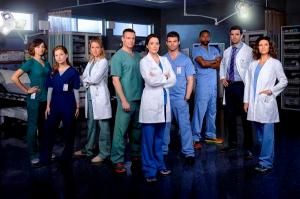 Joining CTV’s Thursday night line-up following Grey’s Anatomy and leading into Shonda Rimes’ new show How to Get Away with Murder will see the return of Saving Hope for a third season.

According to CTV’s press release, the series returns with a six-episode Fall Event Season, beginning with a special two-night, two-hour premiere, all part of Premiere Week 2014 – airing Monday, Sept. 22 (Part 1) and Thursday, Sept. 25 (Part 2) at 9 p.m. ET/PT on CTV.

Season 2 ended with Dr. Alex Reid (Erica Durance) being stabbed in the heart by one of Joel’s (Daniel Gillies) patients and we see Charlie (Michael Shanks) and Dawn working frantically to save her life but then Charlie saw the spirit of Alex appear in front of him and season 2 came to a close.

So does Alex survive? One would assume based on what the press release states:

In Part 1 of the special two-night Season 3 premiere event entitled “Heaven Can Wait” (Monday, Sept. 22 at 9 p.m. ET/PT on CTV), after being stabbed in the heart in the Season 2 finale, Dr. Alex Reid (Erica Durance) has a profound experience in the liminal space, while a desperate Charlie Harris (Michael Shanks) and his ex – Dawn Bell (Michelle Nolden) race against the clock to save her life. Meanwhile, Dr. Joel Goran (Daniel Gillies) is pulled in to the ER to treat a suicidal patient that tests his duty as a doctor, and Maggie Lin (Julia Taylor Ross) makes a bold decision that changes her relationship with Gavin Murphy (Kristopher Turner).

I really hope that Alex doesn’t stay in a coma for the entire season.

CTV also describes season 3 as featuring “the passion, pressures, and power plays viewers have come to know and love from the Hope Zion Hospital dream team. There’s no break in the action, as the season kicks-off with a bevy of pulse‐pounding surgeries, adrenaline‐addled breakthroughs, sultry romances, and new doctors ready to shake things up. Relationships are a focus for the series’ leads, while trials and triumphs navigate them through unchartered waters. With the temperature rising in and out of the OR, SAVING HOPE’s band of doctors take big risks for a chance to redefine their futures by the end of the fall finale.”

Just in case you missed it the first two times, Saving Hope season 3 premieres Monday, September 22 and Thursday September 25 at 9 pm on CTV.

In the meantime, get caught up with Season 2 with our episode recaps.