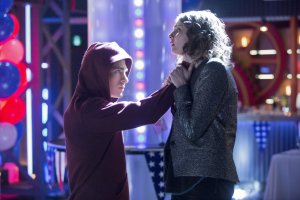 When I went to Fan Expo Vancouver 2014 this past weekend, like any self-respecting Arrow fan, I went to Stephen Amell’s table to get his autograph. I told him I was a fan of the show, Stephen asked me what do I think would happen in tonight’s episode. I said it was all about Roy and his Roy-rage but Stephen told me that this episode was not about Roy.

Stephen was right but Roy does play a big part in tonight’s episode.

We open up with Roy still in a coma but no sign of a cure yet from STAR Labs. Diggle and Felicity wonder why Isabel Rochev’s disappearance has not made waves in the media when Roy starts to convulse a bit, freaking out Felicity. Diggle decides to get them sushi and while he is away, Felicity wonders to Roy how he can be so scary with him knocked out. When Felicity turns to see him, she finds that Roy is gone. Diggle returns having forgotten his phone and sees Roy looking quite unhinged, hands shaking, looking ready to hurt Felicity. Instead, Roy just flips the table with Felicity’s computer equipment over and disappears.

Meanwhile at a hotel room, Oliver and Sara are having much needed alone time. Oliver suggests that they move in together but before Sara can answer the two get a frantic call from Felicity alerting them of the Roy situation.

They return to the Arrow Cave where Sara wants to kill Roy while Oliver believes he can be saved. The two in their Arrow and Canary garb are on their motorbikes searching fruitlessly for Roy. Felicity then alerts them that the police are on their way to a crime scene where a man in a red hoodie has attacked several people. When Arrow and Canary arrive on the scene, one of the victims describe the state of Roy.

Roy has moved one to another part of the Glades and Sin sees him and knows that something is wrong with Roy. When one of Sin’s friends tries to defend her, Sin tries to get the guy to leave Roy alone knowing that he can seriously hurt people. But the guy doesn’t listen and he and others, including Sin get hurt.

At the Queen Mansion, Moira is giving an interview talking about her campaign for mayor. Thea comes in to tell her mom that she can’t have her rally at Verdant. Moira tells her daughter that the rally is happening there as they had signed a contract. Thea storms off mad that Moira has won that battle. Mark then tells Moira that she needs to decide what she has to be right now: a mother or a mayoral candidate.

So Moira visits Sebastian Blood in his office to say she is withdrawing from the race and using the rally to announce the news via a concession piece. Blood wants to know why and Moira says so she can be a mother to Thea. Blood believes that is for the best not only for him but her too.

Sin visits Verdant in hopes of finding Thea but Thea has gone to the stock room with Diggle in tow for her protection. But Sara sees Sin and she tells her all about Roy’s rage issues. Later on Sin calls Sara to say that Roy has gone to their home (the clock tower).

Arrow and Canary go there but Roy knocks out the Canary and when Arrow takes off the mask to try and talk Roy down, he instead breaks Oliver’s knee. Roy escapes and kills one police officer and injures another.

Canary has taken Arrow to the hospital and the doctor there helps put his knee in a brace and gives him enough drugs to dull the pain. Back at the Arrow Cave, Oliver and Sara argue about what to do with Roy. Sara wants to kill him but Oliver believes he can be saved. Sara says that she has heard this from Oliver before back on the island and with Slade. Sara leaves in a huff and Oliver tells Felicity that Sara was just like him when he got back from the island – all hell bent on revenge and so much darkness inside. Felicity tells Oliver that he can be the one to pull Sara out of the dark.

While Diggle keeps an eye on Thea, the two have a talk about family when Thea sees a news report about Roy killing a police officer. Sin tells Thea abut Roy being injected with something that has changed him. Roy meanwhile, has a hallucination of Thea blaming herself for his troubles and that he should just kill her.

At the rally, Mark tells Oliver that Moira plans on pulling out of the mayoral race. So Oliver visits his mom to talk her out of it. One of the revealing things that comes out of this conversation is that Moira knows that Oliver is the Arrow but doesn’t outright say it. All Moira says that she knows about what he does and couldn’t be more proud. Apparently, Moira has known since the night of the Undertaking. Oliver also tells her about sacrifice and doing the right thing.

Hearing this, Moira concession speech becomes more of a affirmation speech about running for mayor. Blood is none to happy. Thea also makes a speech that was more about luring Roy to Verdant than supporting her mom.

Roy does arrive at Verdant and Thea tries to talk to him but he just grabs her by the throat and starts to choke her. Canary comes on the scene and points a gun at Roy ready to kill until Sin steps in the way. Instead Canary shoots Roy in the leg and Roy begs her to kill him. When Canary is about to shoot Roy, Arrow shows up and puts three tranq arrows in Roy.

Roy is now back on the table in the Arrow Cave and they restrain him down. Sara knows that killing will always be in her blood and she can’t be with Oliver or she will drag him back into the darkness if they remain together. So Sara breaks up with him and leaves. Sara does share a goodbye with Sin and tells her she is off to visit an old friend. Methinks it is Nyssa.

The flashbacks tonight is all about demonstrating the strong mother-son bond that Oliver and Moira have. Oliver confides to his mom that he got a girl pregnant. Moira meets with this young woman and pays her $2 million to say that she lost the baby and to go back to Central City. Oliver later receives a phone call from this young lady telling him that she lost the baby. Oliver is relieved and is happy that he told his mom. The two share a very sweet moment made ever so bittersweet considering what happens later.

Back to the present, Thea wonders where Oliver was while all the stuff with Roy was happening. Moira covers for Oliver and says he was with her. Thea sees that they are lying to her again and the three not so happy family get into the limo.

Thea tells her mom and brother that their lies only hurt her even if it meant to protect her. So to gain her children’s trust, Moira is about to reveal to them that Malcolm Merlyn is alive. But Moira doesn’t get a chance when their limo gets t-boned.

When all three come to, they are in the woods and there is Slade Wilson. Slade forces Oliver to choose between his mom and sister as to who will live. This echoes the choice back on the island. Oliver once again tries to get Slade to kill him. But Slade won’t relent as he switches pointing the gun between Thea and Moira. However, Moira gets on her feet and says that the night can only end in one way and that is her death. Both Oliver and Thea beg Slade to not kill her. Slade admires Moira’s courage and puts away the gun and says that Oliver lacks that. Just when you think that Moira might be okay, Slade pulls out his sword and stabs her right in the chest. Moira collapses to ground and Slade one more person needs to die before this ends. Slade leaves and Oliver and Thea mourn over the dead body of their mother.

Rest in peace Moira Queen. I will miss Susanna Thompson on Arrow. Let’s see how this death will affect Thea and Oliver. We know that this death is beneficial to Blood. One of the things that Stephen Amell mentioned during his Fan Expo Vancouver 2014 talk was that he hopes that Oliver becomes more of a public figure. Maybe Oliver will run for mayor in his mom’s stead. Apparently, Oliver was mayor of Star City in the comics.  Another theory here. It is obvious that this woman didn’t lose the baby so I bet that she had a son and his name is Connor Hawke.

Also, I predict the second death is Sara because we need her to die so that Laurel will eventually take up the Black Canary mantle. Can’t wait for the few episodes. Apparently, the next three all takes place on one night.