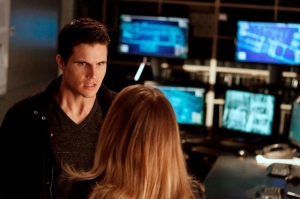 All of the Tomorrow People are anxiously waiting to see if Roger will wake up as Marla keeps an eye on his vitals. While John is waiting he remembers the night he shot Roger.

Roger does wake up and Stephen tells him that he used the Machine to bring him back. This lets Roger know that the Founder is still alive and wants to go after him. Marla is a bit pissed at Roger going back to his old ways and not wanting to see his family again and she storms off to see Luca.

As Stephen goes after his mom, Hilary mind calls him and he tells her the good news that his dad is back. Stephen also asks Hilary to cover for him at Ultra. Of course, listening in is the Founder who wants to Hilary to use her connection to Stephen to get close to Roger so she can bring him in as the Founder needs him for the Machine.

Meanwhile, Roger wants to go topside to be with his family but Cara won’t let him go as he would endanger the Tomorrow People. The only way Roger can go is if he fights John. Roger does win but John knows that the Tomorrow People needs Roger to give them hope.

When Roger returns home, Marla is happy to see him and asks that he just be with them. Luca arrives home and it is not a happy reunion.

At dinner, Astrid comes over to act as a buffer for everyone but Hilary also shows up too. The dinner is a bit awkward as Luca says he can’t be around a guy that was gone for 10 years. But Roger makes a speech about family and this seems to have solved Luca’s anger. When Stephen and Roger step out for air, Astrid gives a warning to Hilary not to hurt Stephen but Hilary tells Astrid that she is in love with him.

Stephen and Roger as stepped out for some air and Stephen knows that his dad is going to take off again. Roger says that it is to protect his family because of the Founder can do. We see Hilary listening in and when it looks like Ultra is going to grab Roger, Hilary tells them that they missed their window.

Back at the Lair, one of the Tomorrow People. Natalie (Leven Ramblin), wonders what is next now that Roger is back but Russell and Cara doesn’t have an answer. Charlie wonders why everyone is so unhappy. John answers that their saviour left them again. Charlie doesn’t need Roger as John is her hero.

At a bar, Roger finds his brother drinking heavily. Jedikiah tells his brother the reason why he wasn’t there when Roger woke up because he couldn’t face him. Roger forgives Jedikiah but Jedikiah doesn’t deserve his forgiveness. When Roger mentions the Founder using Stephen for the machine, Jedikiah knows that is just bad news and has some intel that could help them back at his place.

When they arrive at Jedikiah’s, he takes a covert laptop and taps into ALICE – Ultra’s version of TIM – to get intel on the Machine. ALICE also alerts the brothers that Ultra is on its way but the two escape just as they arrive.

The footage on that file shows that when Stephen was in the machine and stopped time, it allowed another Tomorrow person to kill a human. So the gang decide that the best course of action is to blow up the machine and only Roger and Stephen can do it.

At Ultra, the Founder thinks Hilary’s feelings for Stephen is getting in the way of her mission but Hilary says that is not the case. Hilary tells the Founder that Roger is going to go on the run and is aware of the existence of a fully functional Machine.

Stephen goes to Ultra and learns from Hilary that the Machine is being moved to a secret location. Stephen informs his dad of the change but the plan stays the same.

Marla realizes that Roger is going to disappear again but she understands and shouldn’t have expected any different and should embrace the fact that they are different. Roger tells his wife that she is the glue that kept their family together. The two share a sweet kiss and Marla tells Roger that she will explain things to Luca and he leaves to destroy the machine. I have to say that Sarah Clarke and Jeffrey Pierce had some nice chemistry here and it shows that Marla is still in love with her husband.

Back at the lair, Natalie is none to happy about the plan to destroy the machine and their chance to get to the Refuge. Even hearing that the Machine will kill humans doesn’t stop Natalie from not wanting the Machine destroyed. In fact, Natalie takes a group of Tomorrow People topside to go to Ultra as part of the truce. Russell goes with them to babysit.

At this secret location, Roger and Stephen start their mission to blow up the Machine. With Stephen monitoring the security cameras, Roger makes his way to the Machine but there to stop him is John who pulls a gun on him. John wants Roger to return to the Lair to lead the Tomorrow People so John shoots him with a tranq and Roger goes down.

Hilary arrives and tries to get Stephen to leave. Stephen realizes Hilary has betrayed him and led him to a trap. Stephen tries to warn John but can’t.

John gets ambushed by Ultra agents and he tries to fight him off but they get the better of him. On the upside, Stephen gets his father out.

At Ultra, a captured John refuses to help the Founder find where Roger is. The Founder injects something in John and he starts to convulse. I am not 100% sure this means that John’s powers are gone because as he was being injected it look like a small hurricane was happening in that room. When John comes to, the Founder asks him to deliver a message to the Tomorrow People.

Also at Ultra is Russell, Natalie et al. All get the tracer injected into them.

At the Tomorrow People’s favourite noodle place, Hilary meets up with Astrid and tells her she was right about him. Hilary wants to make up for what she did to Stephen and asks Astrid to call her in one hour. Astrid promises that she will.

Stephen has brought his mom and Luca to the Lair where the family is reunited. Roger, Stephen and Jedikiah then come up with a plan to take down the Founder. Stephen the receives a mind call from Hilary who is all apologetic. Stephen is upset with her but realizes from her tone of voice that something is off.

Back at Ultra, Hilary comes in to talk to the Founder. Hilary tells him that she has always wanted to be a hero and the only way that she can get Stephen’s forgiveness is that the Founder has to die. The Founder says that it is impossible as their kind can’t kill. But Hilary counters that she won’t be doing the kill as the opens up her coat ahd her chest is strapped with explosives. Astrid then calls and Hilary announces the call is for the Founder and just as Stephen arrives, the Founder’s office blows up.

So is the Founder dead? Not quite sure but Hilary sure is. And why do I feel Natalie is like the Nikki and Paulo of the Tomorrow People – a bit annoying and so far don’t know the point. Don’t get me wrong I really like Leven Rambin ever since All my Children but right now Natalie is annoying. Also, let’s hope that Jedikiah is really a good guy.

One thing I do hope is that Roger sticks around as I feel the Jamieson clan are like the Incredibles. Until next week.

1 Comment on The Tomorrow People “A Sort of Homecoming” Recap