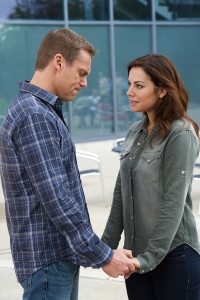 Tonight’s episode picks up after the events of episode 10 “Wishbones”. Let’s get to recapping the action to our favourite doctors at Hope-Zion.

Alex and Charlie are viewing Luke’s body in the morgue just before it will be sent to the funeral home. Alex wants Charlie to talk to Luke considering his revelation in the last episode but Luke is not there. Alex is not ready to sign the release forms and returns to work.

Alex talks to Zach about throwing a memorial service for Luke. A man, Marvin, approaches Alex with her young son, Lou (which Alex thought was Luke) about operating on his son’s sarcoma after reading a paper that Alex wrote back in her 3rd year of residency. This young boy has a nasty looking tumour on his stomach and Martin hopes that Alex will help Lou.

Alex is examining Lou and Marvin tells how Lou was misdiagnosed and by the time they realized something was wrong, were told it was too late but Alex’s paper has given them hope.

Alex goes to Joel about getting approval to do Lou’s surgery but Joel doesn’t think it is a good idea. He tells her if he can get another doctor to agree then she can but really she shouldn’t. However, Alex tells Martin and Lou that the surgery is a go.

Luke finally appear to Charlie. Both aren’t thrilled to see each other. Luke wants to know why he is still here and what he needs to do to move on. Charlie tells him that he needs to resolve an issue. Alex comes and this ends their conversation.

Alex is looking over the x-rays of Lou’s. Reycraft talks about the impossibility of her surgery. Later, Alex approaches Charlie with Lou’s chart and gets his opinion. She asks for his help. They then go to Dana about being part of the surgery. Dana believes that this is a lost cause but Alex brings up Dana’s daughter. However, Dana says she will do the surgery if Alex can drain a golf shot.

Alex obviously does and asks Reycraft to help. After some negotiating, Reycraft is in and so is Maggie.

Alex gathers her team and she goes over the game plan on the operation. Alex then introduces the team to Lou.

I have to say the young boy playing Lou is quite good. Not only is he cute but he is holding his own in all this medical jargon and around the adult actors too.

Meanwhile, Luke finally talks Charlie. Luke says that Alex can’t let go and he needs her to sign the release papers so he can move on. Just when it looks like Charlie won’t help, Charlie changes his mind.

Lou’s surgery starts but they hit a road block when they encounter an unseen vein but Alex manages to get to it but she cut off the vein that brings blood from the leg to the heart. Alex thinks she can fix her mistake.Another obstacle, the tumour is touching Lou’s vertebrae. Alex needs Charlie and goes to get him.

On her way, Alex encounters Marvin. When he sees her, Marvin thinks Lou is dead. She mentions the complications but that Lou is stable.

Charlie tells Luke about what happened to him during his coma. Luke believes that he is sticking around to be sure that Alex is okay. Alex sees Charlie talking to Luke and overhears him talking to Luke about signing the funeral home release. Alex interrupts and tells him she needs his help and that she will sign the release.

As the head to the surgery, Charlie worries about doing the surgery but Alex is insists that he can. Charlie then enters the surgery to do is work. Alex wants to ask Charlie a question but doesn’t ask it.

Charlie is now working on Lou and then Alex and Reycraft jump in. But it looks like Charlie might have nicked Lou’s spinal cord but the damage doesn’t seem to be that bad. Charlie corrects his mistake and the surgery continues.

The surgery seems a success as there are no tumours to be found and Maggie removes the tumour. Next up is Dana who closes Lou up but before that can happen, Alex collapses and Luke is looking on.

Charlie comes by and asks if Alex is okay but she doesn’t know and Luke looks distraught over Alex.

Alex visits Lou and tells him that his surgery was a miracle. The young lad looks concern. He wonders if his dad will still like him now that he is not sick. Alex says that yes he will. Marvin comes in a reassures his son that nothing will change about their close father-son relationship.

Charlie finds Luke and tells him that Alex signed the release and that she is starting to let him go and he can move on. Charlie says that Luke doesn’t have to watch over her anymore that she will be okay. Luke doesn’t think so. Luke believes that Alex will try and fix Charlie if he revealed the truth in what he can do. Luke believes that he is there to protect Alex from Charlie so that he doesn’t bring her down in trying to fix him. Charlie seems to come to the decision not to tell Alex everything and this gets Luke to move on.

Joel seems to be back at being the playboy. He runs into Dana and tells her that the hospital board is extending his contract as Chief of Surgery but Joel doesn’t seeem quite satisfied with the job as he feels that the staff always want something from him.

Joel is examining Ida (Diane D’Aquila) who has suffered a leg fracture and she also has Parkinson’s. A nurse comes in to take Ida away for a study that involves biking. Shahir is doing this study and Joel finds out this is costing the hospital a lot of money.

When Ida starts doing the exercise for his study, Joel doesn’t see the point. When Ida falls off the stationary bike, Joel rushes to her side.

This causes Joel to cancel Shahir’s study. But Shahir defends his study and yells at Joel for having any feelings.

Joel is examining Ida. He wonders why Ida wanted to do the study and says that it gave her hope. Ida wants to know how much the study is and wants to contribute her $500 winnings to it. This seems to get Joel to change his mind about Shahir’s study.

Joel visits Shahir and tells him that he does have feelings but can’t express them as the Chief. Shahir thinks that Joel is coming on to him but this gets cleared up. But Joel wants to show Shahir something.

Gavin is dealing with a patient, Walter, that needs his help immediately. He is distraught as he has lost something. He believes someone has kidnapped what looks like a pet, a guinea pig. Walter collapses with chest pains and Dawn comes on the scene.

Walter is pleased that the hospital found his guinea pig. Dawn is examining Walter and he requires something to help his heart. Gavin is working on Walter to let go of his guinea pig so he can reconnect with the human race. Dawn tells Walter that she will give his guinea pig a good home. This pleases Walter but confounds Gavin. He confronts Dawn for lying to Walter about taking his guinea pig but Dawn thinks there is nothing wrong with giving him hope. Gavin believes Dawn doing that will cause Walter to slide further backwards and reattach himself to his guinea pig.

In a funny scene, Reycraft is asking Maggie to make her NFL picks. It seems that Maggie has been picking winners and is also making some money off this. But Maggie knows nothing about football and jus picks the city she rather vacation in when Reycraft lists the game match-ups.

The end of the episode features a montage over Reuben and the Dark’s “Shoulderblade” of Lou and Marvin reading a story together, Walter handing over his guinea pig to Dawn, Joel overseeing Shahir cycle stud with Ida successfully riding a bike. And Gavin and Maggie biking where Maggie tells Gavin that she is pregnant which causes Gavin to topple over his bike.

At the creek that Luke mentioned, we see Alex with his ashes and spreads it in it. Alex seems at peace at that moment.

Back at the hospital. Alex tells Charlie that she saw him talking to himself and that she will fight for them. But Charlie says that is the problem. Despite the fact that Charlie loves her, he tells her that he needs to fix himself by himself. It seems that Charlie has broken up with Alex but that is left unclear.

The thing is Charlie didn’t retract that he can see dead people to Alex and Alex witnessed something so she is not sure what is up with Charlie. I am not quite sure now where the show is going now: are we back to Charlie keeping his secret a secret or will Alex accept his gift. It will be interesting to see where this goes.

And next week Dana becomes the patient and I predict now that Charlie will see Dana as a spirit as something about her surgery will go wrong.