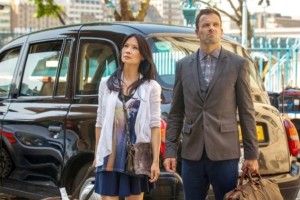 Howdy, it’s your friendly neighbourhood Elementary recapper here, and yes, the second season has begun. To catch you up: the American former girlfriend of Sherlock Holmes, Irene Adler, was revealed to be alive at the end of the episode Risk Management (#22), and by the end of the next one, The Woman, it turns out that she is British and Moriarty. Poor Sherlock. He seems okay at the end of the season finale, as does Watson, who’s now cracking cases with Gregson and Bell. Adler/Moriarty does not get away at the end, but we ARE talking Moriarty here – like she’s not going to be able to escape from wherever they lock her up. Count on her to make an appearance (presumably when Natalie Dormer’s Game of Thrones schedule permits?) at some point, but not tonight.

We meet Lestrade at London’s Highgate Cemetery in the opening scene, not in the Rupert Graves style (of BBC’s Sherlock), but as a run-down, former copper, who crashes the funeral of the man who supposedly ruined his reputation which may or may not have had something to do with the man’s son Lawrence Pendry, who Lestrade was investigating for the murder of his wife, Mary.

Back in New York, Watson and Holmes are discussing a vexing case they’ve been working on and he solves it, Gregson and Bell are simultaneously miffed and impressed when Holmes gets a phone call and is summoned to London to help out Lestrade for the funereal incident as described above. They meet DCI Hopkins at New Scotland Yard who fully briefs the pair as to why former Inspector Lestrade was at the funeral, how the fixation on Lawrence Pendry began, and just before they leave, they make the acquaintance of Pendry himself. Pendry knows that Sherlock had been Lestrade’s silent partner in crime-solving when Holmes did the solving and Lestrade did the taking of the credit.

Our duo travel to 221b Baker Street next where a friend of Holmes was supposed to be taking care of the flat, instead, Holmes is distressed to see none of his possessions inside, and not happy to learn that his father had given the flat to his brother, who takes a bit of a shine to Joan. She learns that a) Sherlock has a brother and b) the reason for their acrimony is Sherlock’s seduction of Mycroft’s fiancée 5 years previous to prove to his brother that the woman in question was only after the family’s money. It didn’t go over well. While Mycroft (played by Rhys Ifans, Papa Lovegood from the Harry Potter series) is out of the room, she suggests this might be a good opportunity for Step Nine, but Sherlock is not convinced. Also, he considers Mycroft lazy – apparently Mycroft took his trust fund money and bought/opened restaurants, in other words, completely unlike the Mycroft of BBC’s Sherlock (as played by Mark Gatiss). Lacking any other accommodation arrangements, Sherlock acquiesces to staying at Mycroft’s, but doesn’t actually and goes out looking for Lestrade, who he finds in a pub in Greenwich, and persuades (or is persuaded) to go underground with him temporarily. Joan finds them in a disused theatre, having received a text from Sherlock to meet them there leaving her conversation with Mycroft about their relationships with Sherlock.

Sherlock, Lestrade, and Watson review crime scene photos, see something that makes Sherlock suspect Pendry is, in fact, guilty of the murder of his wife, and Sherlock & Watson visit the Pendry home under the guise of a ‘security check’ (Watson as the #1 home security expert of the USA), Lestrade having provided them with a suicide note threatening to end Pendry first and then his own life. Upon leaving, Sherlock declares Pendry is guilty and that he knew exactly how it was done, which he explains back at the theatre: the gun the Met was unable to locate had been printed in 3D and dissolved in acetone while they searched, but no one questioned the presence of milky liquid in a milk bottle in the Pendry’s fridge, except Sherlock who thought it incongruous with what else he knew about Mr & Mrs Pendry: he is lactose intolerant, she was a vegan. Oh, and the crooked line of masks they saw in evidence photos was due to Mr Pendry replacing the nail he used as a firing pin in the gun, on which Sherlock spotted some residue. Lestrade wants to take it to DCI Hopkins, but Sherlock disagrees, opting to find incontrovertible evidence instead, like how and where the gun was made.

Watson goes to have dinner with Mycroft. He closed the restaurant so they could talk. Watson is a little worried he might have romantic aspirations, but instead has a confession: he had been seriously ill within the last couple of years, had received a bone marrow transplant, and his only regret in life was that his relationship with Sherlock is non-existent. He asks of Joan “How does one become Sherlock Holmes’s friend?” as she seems to be the first one Sherlock has ever had.

Meanwhile, on the South Bank of the Thames, across St Paul’s Cathedral, Lestrade and Sherlock talk. Sherlock apologises for not having looked out for Lestrade when the latter was relishing the spotlight of their success together. Sherlock is in mid-“I’d like to make amends” when Lestrade finds a name he recognises in a list of 3D printers bought in London Sherlock organised (via signs held up in front of a CC camera at Trafalgar Square and surreptitiously delivered prior to Watson leaving for her dinner engagement). Off they go to that person’s house (Pendry’s former handyman), thinking they are going to question the man, instead, when they break the door open, they find Nicholas Ginn stabbed to death on the floor. After the commercial break, Watson and Holmes go over what they see and don’t see, and when Holmes finds a piece of a plastic gun in an apple, the next scene has him explaining to Pendry where he went wrong: apparently, he hadn’t used the right kind of bullet, so it exploded on him, and he had to stab Ginn instead. And part of the evidence would be injuries to his right forearm.

Pendry is taken away in cuffs, Lestrade is vindicated, but Holmes asks him not to take the credit. He explains he doesn’t want to enable him in the drug of Lestrade’s choice (fame and adoration) but Lestrade does anyway.

Mycroft summons Sherlock to a meeting before the return trip to New York. It starts out by Mycroft telling Sherlock where his things are, but when he doesn’t rise to the occasion of having a brotherly spat, Sherlock calls him on it, not actually asking him if something was wrong, merely stating it. Mycroft’s response is to blow up Sherlock’s possessions. In his parting remarks, he tells him that he considers them even, that he forgives Sherlock for “everything” and that he should know that “things are different between us now. It does not go unnoticed – he seems to be mildly stunned by it, and as he and Watson leave for the airport, not altogether displeased.

As far as the Holmes canon goes, we’ve gone further into new territory. Instead of the Lestrade and the Mycroft from the books, or the television/cinematic versions, we get a fame-seeker and a restauranteur. What this show is essentially doing is taking the names of characters, keeping their relationship to Holmes somewhat intact, and that is all. It is a mystery show that has names in it that sound familiar to people who have had exposure of some kind to Sherlock Holmes, et al, but that is about all. If they weren’t named what they are, we’d be drawing zero parallels, we might not even be talking about this show at all. But the Holmes backstory is the gimmick here, just like every other crime-ish drama out there; Elementary is just very upfront about it.