As we are nearing the series finale of Saving Hope, we are getting some happy endings to some story lines while I am growing concerned for what the show has in store for Cassie.

Cassie and her very bad day in the ER

Like the good Chief Resident that she is, Cassie has put herself on ER duty to allow some of her residents to take on surgeries. However, Cassie is dealing with cases that involves q-tips stuck in people’s ears and other things stuck in places where the sun don’t shine.

Throughout the episode, Cassie has been receiving gifts from a secret admirer that she thought was Billy, who says it wasn’t him. One of those gifts was a whole bunch of balloons where we discover Cassie has a fear of them. Another gift turns out to be a chameleon with a note saying something about how he is thinking of her and how a person can change for someone. 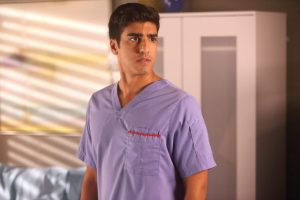 While it is a mystery to Cassie, Dev and Billy who her secret admirer, we, the audience, suspect it is Jake the wrestler from the last episode. How do we know it is Jake? Remember last week how Cassie found a book on Greek myths bookmarked to page on Cassandra? Well, we suspect it was left there by Jake.

I am hoping that perhaps this story line will end up being happy. This season, Cassie has been the comic relief of the show and I would hate for the series to end on such a dark note for her character.

Shahir is preparing to meet a pair of foster siblings that he and Jonathan could potential adopt at some sort of potluck. Beforehand, Shahir is coerced into a pre-natal surgery by a friend and mabe ex-girlfriend before he came out. Angeli has a young mother, Falik, who is 26-weeks pregnant with a child with spina-bifoda. Angeli wants Shahir to operate on the baby to put the nerves back in.

At first Shahir turns down the surgery but meets Falik. Falik tells Shahir that she is planning on giving up her son for adoption and fears no-one will not want to take care of a child with special needs if the surgery isn’t performed. Shahir tells Falik that even if the baby has the surgery, he might still need crutches. Falik still wants the surgery to be performed.

Shahir eventually agrees and when Falik starts to freak out, he calms her down. Falik notes that he must be a father in the way he was able to calm her. Shahir notes he is not but he and his partner are planning to adopt a baby.

During the surgery, Shahir has to operate directly on the fetus and because of that Angeli has to deliver the baby. The surgery was a success and the baby seems to be doing okay in the NICU. Falik is there and asks if Shahir and Jonathan are solid. After assuring Falik that he is. she asks if Shahir would adopt her son. We later see Shahir give Jonathan a call to see what he thinks.

Charlie is fighting for his job and has come into Hope Zion to prepare his case. Several of the other doctors like Cassie, Dev, Zach and Shahir are all brought in front of the board to give statements about Charlie and answer questions about the board. We see Zach and Shahir defend Charlie while we see Amos listening in.

We learned last week that Amos is a spirit and Charlie isn’t happy with him at being deceived. It seems that Amos is stuck in limbo and didn’t tell the truth as he knew he needed to help Charlie in order for him to move on. Amos was afraid that Charlie would get him to move on in a different way if he knew the truth. 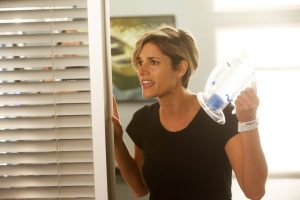 Meanwhile, Alex has also been asked by the board to give a statement about Charlie. Because of this, Alex is a little distracted. Layla still wants to help Alex but she is still reluctant. Layla also wants to leave but can’t until she is able to breathe steadily post-op. Since Layla is stuck at Hope Zion, she really wants to help Alex especially after hearing that Charlie can speak to ghosts. 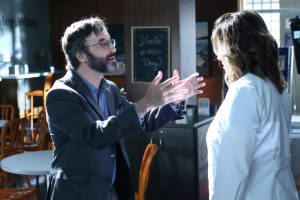 Alex finds Layla at the chapel and admits that Charlie can see ghosts and she broke up with him because she thinks she is cursed. Layla thinks that Alex can understand Charlie better if she see things from his perspective. Alex allows Layla to let her see what Charlie sees. We see flashes of Alex and Charlier from earlier seasons of the show and we see her enter the spirit world. There Alex sees Amos looking for Charlie. Amos and Alex speak about Charlie and how he wants to help him. Alex may not totally understand what is going on but tells Amos that she will find Charlie.

When Alex wakes up, she finally understands but gets a bit overwhelmed and passes out. Layla brings Alex to the ER but she insists she is fine.

Later, we see Charlie interrupt Dev’s statement to tell the board that he has quit. When Charlie returns to his office, Amos is there. We finally get to the truth to the matter. All of this stuff of late stems from Charlie unable to save the young boy from getting killed by the drunk driver. It seems that this incident triggered Charlie guilt over his parents’ death. All of his life, Charlie blamed himself that his parents died in the car accident that he survived. But in fact, Charlie’s dad went to fast and another car hit them. Amos tells Charlie that he needs to let go of that guilt and blame. Charlie doesn’t want to as he feels he will lose his parents. But someone how that realization causes Amos’ spirit to disappear.

Alex comes into his office wondering where the board went as she was ready to give her statement. Charlie let her know that he resigned. Alex doesn’t think that is a good idea and tells Charlie she finally understands what he has been going through and is sorry she wasn’t there to help him and be there for him. Alex wanted to tell the board all about Charlie’s miracle saves and they were lucky to have a doctor like him at Hope Zion.

Charlie wonders where Alex was 20 minutes early. We finally get the moment we’ve been waiting for since the season premiere and that is Charlie and Alex back together, curse or no curse. 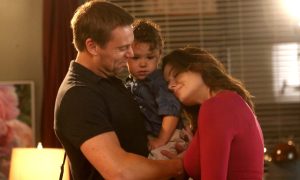 And in a sweet family scene, we see Alex, Charlie and Luke return home.

So do we think this show will end with a happy ending?