Saving Hope’s fifth and final season begins tonight immediately after where season 4 left off. So who got shot by a vengeful Tom Crenshaw? Who survived? Let’s get to it.

Ambulances have surrounded the Fairmont Royal York. Alex is being checked out but she is worried about Charlie and leaves in search of him. Zach points Alex in the right direction and she finds Charlie and he is okay. Bullet went through his arm and Crenshaw is dead. Charlie mentions how he planned a real romantic evening at a suite at the Royal York. Charlie pulls out a ring slips it on Alex’s finger but no proposal is really said and nor did she say yes. 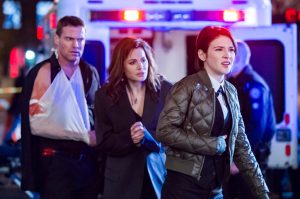 Their moment is interrupted by Grace, a caterer at their event, who collapses. Grace has a bullet wound lower abdomen and Alex plugs the wound with her finger until she brought to Hope Zion.

Once at Hope-Zion, Maggie sees that the bullet is near Grace’s aorta. To keep Grace calm, Maggie asks her about a tattoo near the bullet wound. Grace mentions that it was in honour of surviving a previous gunshot. The first time Grace was shot was Feb 7, 2014, which was the same gun shooting incident that Alex was involved in back in season 2.

Grace’s mom, Ruth, arrives and is frantic and wants to see a priest. Alex finds one in failed seminary student turned vascular doctor Manny Palmer (Jared Joseph) in the hospital chapel when she can’t find the chaplain.

Ruth wants Manny to give last rights to Grace as she thinks she will die because she is cursed. Alex says she will save Grace. But as always on Saving Hope the operation doesn’t go as planned and even though she stops the bleeding, Grace is still in danger of bleeding out.

Alex learns from Ruth that Grace was born Hep C positive because of her drug use. Ruth gave Grace up for adoption but reconnected shortly before her first time being shot. Ruth thinks she is bad luck for her daughter but Alex doesn’t believe in luck and Grace will be okay.

Ruth is about to leave Hope-Zion thinking that Grace will be better off without her. Alex convinces her to stay but Ruth says something that gives Alex something to think about like no matter how much two people love each other sometimes they just don’t fit.

Meanwhile, Dawn checks out Charlie and is fine. When Dawn goes to answer his phone, she finds the ring box wants to know Alex answer but Charlie doesn’t know. Dawn thinks Charlie is afraid Alex will say no but when he mentions that he can’t feel his hand, he is rushed to surgery. Dr. Palmer is operating on Charlie’s arm and during it Charlie sees Grace who says she is seeing lights and wants to go towards it. Charlie tries to prevent Ruth from doing so but his surgery hits a snag too and has to go to the OR. In the OR, it is bad and his arm bleeds pretty bad. In the spirit world, Grace and Charlie talk about Alex and their relationship. When Grace asks to see the ring, he goes to pull out the ring box but just gets sand.

Alex learns of Charlie and goes to the OR. Dawn says the arm has been bleeding for a while and hints at amputation. Alex doesn’t want that to happen and Dawn manages to get profusion back however Charlie still might not be able to operate. Alex leaves the OR and looks at ring at wonders how many times can the two go through the things they’ve been through. Spirit Charlie hears this. While recovering, Charlie sees Grace’s spirit and tells Alex to go to her. she does and sees Grace has died with Ruth by her side and is grief-striken and blames herself for killing her daughter.

Dawn arrives at Hope-Zion ready to help out but there is nothing to do until she does a plastic consult on a male stripper called Doctor Dustiny or Dustin who fell and hit butt implanted flipped over. Dan can’t operate until swelling goes down and wants him discharged. Meanwhile, Cassie is objectifying him and Shahir keeps on walking by to get a glimpse. As Dustin is about to be discharge but Cassie notices clear liquid from his nose and his awkward gait. Cassie realizes that Dustin has a skull fracture. Shahir confirms the injury but refuses to do the surgery as he frequented the strip club that Dustin worked at and he was his favourite. Dana and Cassie convinces Shahir to perform the surgery as long as Dana promises to save Dustin’s ass. Dustin is fine and we see him give Shahir an “examination” as he recovers

Dana is lost after recovering from her breast cancer treatment. Dana wants Cassie to tell her what she should do. 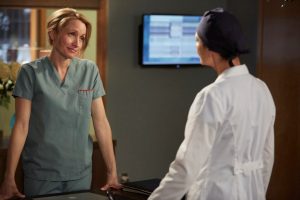 Dana interrupts Zach and Dawn’s alone time to speak to her about what she wants to do next. Dana is grateful to Dawn for all she has done for her as she was going through her treatments. Now that she is on the other side of things, Dana wants to something meaningful with the time she has left. Dana wants to re-certify as a trauma surgeon. Dawn asks if Dana can cut it being a resident again and she assures her that she can. The two ladies then place a friendly bet.

Elsewhere, Maggie too is feeling a bit lost after the shooting and also admits to still being in love with Zach. Jackson tries to cheer her up about the award she and Alex won but it doesn’t quite seem to work.

Cassie is on a high after saving Dustin and proceeds to make-out with Dev. 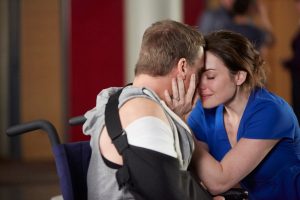 At episode’s end, Charlie and Alex have the talk. Alex wonders how many times can they go through this, this meaning Charlie’s life or her life constantly being in danger. Charlie wonders if Alex thinks they are cursed and think that she is crazy for thinking so. Alex says Charlie is one to talk considering he talks to ghosts. Charlie reassures them of their love. Alex tells Charlie that while she loves him more than anyone she has ever loved but she can’t do this anymore and gives him back his ring and walks away.

I’ve read that season 5 is about people finding their destinies. So are Charlie and Alex destined to be together or apart? Is Dana’s destiny to be a trauma surgeon? Will Maggie find professional and personal happiness? Will Zach and Dawn continue to be happy? Let’s hear your season 5 prediction and wishes.