Supergirl is pulling out all the stops for its first season. Case in point is the introduction of Bizarro Supergirl in this week’s episode whereas it took until late season 6 and season 7 for Smallville to introduce Bizarro Clark Kent.

We open 3 months ago with Maxwell Lord injecting black goo that presumably contains Supergirl’s DNA into our Jane Doe, who manages to survive the injection but comes out of it with black eyes.

At the DEO, Hank, Alex and Kara wonder who could the woman be. A clone is discounted as is an alien shape shifter. Kara then wonders if the woman that Hank found at Lord could be it but he rules that out because the girl was in a coma with little brain activity.

In the present day, Kara arrives at work and asks for Winn’s help in finding her doppleganger. At first, Winn isn’t interested but his curiosity gets the better of him.

Kara notices that Cat is being overly nice to her when her boss gives her her favourite coffee drink. Kara figures it is because she has a date with Adam. During an editorial meeting, Cat is asking her staff to come up with a headline to explain Supergirl’s bizarre behaviour. Kara suggests that perhaps the Supergirl that people saw from the night before was an imposter. Cat likes that angle and goes with it.

At the Superfriend HQ, Kara wants Winn to check on any comatose women matching her description that have gone missing. Kara gets distracted for a moment with a text from Adam confirming their date for that night. James and Winn notices her blushing and when Kara notes she has a date with Adam, James pretends that he is happy for her, which Winn sees right through.

In fact, later on over whiskey at the office, Winn encourages James to tell Kara how he feels and that he shouldn’t be in a relationship (i.e. Lucy) if he has feelings for someone else.

At Lord Technologies, we see that Bizarro Supergirl looks exactly like Supergirl and is watching vidoes of her and receiving electro shock therapy. Bizarro, names do by Cat, is being taught by Lord that Supergirl is the enemy.

While on her date with Adam, he tells Kara that he thinks she is amazing and we see the chemistry between the two. In real-life Blake Jenner and Melissa Benoist as husband and wife so they better have chemistry! Unfortunately, a news reporter about a gondolat filled with people in danger of falling cuts their date short as Kara makes an excuse and leaves. 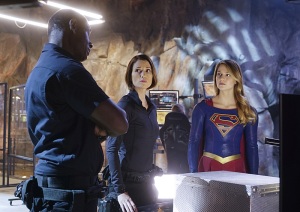 At DEO, Kara reports to Hank and Alex about how Bizarro looks like her yet talks in the third person. The team decide to stop Bizarro using enough kryptonite to knock her down.

When Kara returns to work, Cat isn’t too happy that she ditched her son during their date but Adam is a bit more understanding and the two arrange another one. Meanwhile, Winn has found that 7 comatose women have disappeared into the care of a Promethesus Labs that is owned by Maxwell Lord.

Alex confronts Lord about his experiments on the comatose women. Lord doesn’t directly admit but pretty much says that he did take these women. Lord then says something that makes Alex thinks he knows the real nature of her relationship with Supergirl but Kara tells Alex that it is just Lord playing mind games with her. Kara wants to cancel her date with Adam until Bizarro is caught but Alex encourages her to keep the date and take some time to herself.

While on her date with Adam, she reveals that she is an orphan but not to feel sorry for her because she found a loving adopted family. Kara talks about striving for perfection but Adam says that we aren’t supposed to be perfect and the two share a kiss.

However, their kiss is interrupted hen Bizarro swoops in and kidnaps her.

Kara and Bizarro fight and we see that their powers are opposites. Kara users her heat vision to fight Bizarro’s ice vision. Kara also has to use her freeze breath to fight Bizzaro’s fire breath. Alex and DEO arrive and shoot the kryptonite on Bizarro but instead of wounding her, it strengthens her but distorts her face.

The fuels Bizarro’s hatred of Supergirl, which Lord uses for Supergirl to go after someone she loves.

At the DEO, Kara tells Alex that Lord knows about who she really is because Bizarro came after Kara and not Supergirl. Kara realizes that everyone she cares about is in danger. Hank decides to work on reverse engineer kryptonite so it can stop Bizarro.

Alex is now pissed so he arrests Lord and brings him to the DEO, which pisses off Hank.

Back at CatCo, Kara breaks up with Adam because she doesn’t want him to get hurt but tells him that her life is a bit complicated. The two bid a tearful good bye.

James tries to offer Kara some comfort over her breakup with Adam but she doesn’t want to hear it. We then see Bizarro take James who holds him at a warehouse. James tries to use his superwatch to call Kara but Bizarro stops him. James wants to know why Bizarro took him and she says it is because Supergirl loves him. James asks to take a look at Bizarro but she says she is ugly. James disagrees and says that people don’t love Supergirl because she is pretty they love her because she is brave and selfless, all the reasons why he loves her. While Bizarro is distracted, James manages to use the signal to call Kara and this upsets Bizarro who uses her heat breath to try and hurt James.

Kara hears the distress call as the blue kyprtonite bullets are ready. At the warehouse, Bizarro and Supergirl fight and Alex manages to take down Bizarro with the blue krytonite bullet.

Bizarro is brought back to the DEO where Hank puts her back in a coma. bBt before, Bizarro apologizes to Kara and she offers comfort as she slides into a coma again.

Supergirl visits Lord who threatens he adopted mother Eliza Danvers. Supergirl looks like she is going to use her heat vision on Lord when Alex comes in to say he isn’t worth it.

Back at CatCo, we learn that Adam has returned to Opal City and will only come back to National City to see Cat once in a while. Cat thought that Kara was different from her like putting others before herself but alas she is just like her. Cat decides that they should just remain a boss-employee relationship.

Kara is in the mood for happy hour at Noonan’s with James but he says he can’t as he needs to pick Lucy up from the airport who is coming back from visiting her dad.

So Kara flies back home but notices some gooey substance on her coffee table and she is then attacked by some alien parasite.

This parasite we know leads to the action next week where we see Kara on Krypton as if it never blew up.