It may look like there is an explanation as to why Charlie can see spirits, Maggie job gets in jeopardy and it looks like it’s splitsville for Cassie and Dev.

Dev is trying to making some weekend plans with Cassie that involves some extreme sport (I think axe throwing). Cassie would rather go for brunch and doesn’t understand why Dev wants to so many active things. Before they can continue their conversation, Dev can clearly see that Cassie is giving Bishop an appreciative eye as he walked by.

Dev is in the ER with Zach and their patient is Carmen, a heartbroken young man who got into a construction accident while renovating his home. I really couldn’t see this part of the episode because Carmen had a nail gun accident that resulted in him nailing his hand to his cheek. As Dev and Zach work to remove the nail, Carmen is detailing his plan to win back Bianca. Dev tells Carmen not to bother while Zach is more encouraging to Carmen’s pursuit. After Carmen is discharged, Zach wants to know what’s up with Dev. Dev admits that he found a pro-con list from Cassie listing all the things wrong with him. Zach says he should ask Cassie about the list. Dev does so and Cassie admits it was stupid of her to do. Dev says people only make lists if there is an option out there. Cassie says there isn’t but Dev’s presses and wonders if it is Bishop. Cassie says it is just a crush but Dev has heard enough and breaks up with her. Dev then declines Zach’s request to get a beer.

Throughout the episode, Dana is trying to record a video message for her daughter Molly. Dana’s first attempt she doesn’t like the angle of her face while the next take has her tell a really inappropriate story about her trip to Costa Rica when she was 25. As Dana is attempting to do her third take, Cassie interrupts her to ask for her help to practice a certain procedure that she saw Alex do plus she needs a distraction after her break up with Dev. After that talk, it seems that Dana knows what her video will be. In a heartfelt message, Dana shares her feelings when Molly was born and imparts her with some advice, which is to love with her whole heart.

Wendy Crewson was pretty amazing in this episode and got pretty teary-eyed in the end.

One of Maggie’s patient, Lois, has come into Hope-Zion complaining of chest pains. 9 months ago, Maggie performed gastric by pass surgery on Lois. But Lois isn’t having a heart attack but there is blockage in her esophagus that is causing in discomfort. While in the OR to remove the blockage, Bishop and Maggie notices a problem in the area that Maggie operated on for the gastric by-pass surgery. Bishop gets Maggie to step out and Asha steps in. Ashs thinks that Maggie will get sued, which means she can sweep in and take Maggie’s surgeries. Bishop is unsure what to make of Asha. During the surgery, Bishop notices a sponge in the stomach area and shows Maggie. Bishop advises Maggie to get a lawyer. While meeting with Hope-Zion’s lawyer, Maggie doesn’t understand how the sponge got in Lois’ stomach and she wants to talk to her. The lawyer advises against it and wants Maggie to wait for her lawyer. Maggie learns that Hope-Zion wants to distance itself from her if the suit goes forward. 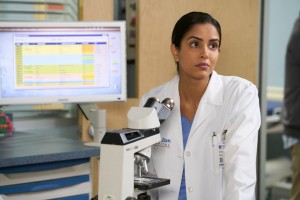 But Asha has found something that clears Maggie. The sponge found isn’t something that Hope-Zion or any hospital in North America uses. This is when Maggie realizes that Lois got another gastric by-pass surgery when the original one didn’t work. Maggie confronts Lois but she only blames Maggie for giving her false hope that she should have loss 50 pounds at this point. Maggie then revisits Lois but this time is more empathetic and they come to an understanding and the suite is dropped.

I’ve found that Julia Taylor Ross has been some of her best work this season and has done remarkable work on some her story lines.

Charlie is prepping for a romantic evening with Alex, who is on her way home. Unfortunately, Kristine arrives all drunk, pleading with Charlie to resume their friendship as she needs it. Charlie rebuffs her and goes to call her a cab but Kristine slips up, avoids Alex and leaves through a stairwell.

The next day, Alex is helping out on a MVA involving a drunk driver and a tree. When Alex learns it is Kristine and sees Luke’s blanket among her belonging. In a moment while Kristine is awake, Alex wants to know how she got her blanket but Kristine only wants to see Charlie. Before Charlie can be called, an issue arises around Kristine’s liver and needs to go into the OR.

While in surgery, the liver is in terrible shape and is bleeding pretty bad even after Cassie and Alex have closed it off. It seems that not even Kristine’s colleagues know much about her and she has no emergency contact.

Kristine’s spirit visits Charlie begging him to let her die. Charlie goes into the surgery and says something is wrong with Kristine’s leg and lo and behold he is right. As Charlie scrubs in, Alex wants to know what is going on. Charlie tells Alex that he broke off his friendship that Kristine came to visit him. Charlie also admits that Kristine was confused about their relationship and tried to kiss him, which is why he has kept his distance. Charlie also tells Alex how Kristine lost her daughter a few years ago.

As Charlie is working on the leg and Cassie and Alex on the liver, Kristine visits Charlie and asks him to get Alex to stop. Charlie refuses to listen to Kristine sends a whole bunch of spirits asking the same. Charlie gets overwhelmed and yells he had enough of the harassment. The spirits leave, Charlie’s work is done and Cassie is confused and wonders how Alex can deal with Charlie’s quirks. Alex performs a graft that helps stop the bleeding of the liver. However, Kristine is still in a coma and Cassie wonders to Shahir of it is possible that someone can will themselves to dies.

In the morgue, Charlie finds Kristine there and we learn that she deliberately caused the accident because she still cannot live without her daughter and was hoping to see her again. Kristine realized her accident could have also killed someone just as her daughter died.

Later, Shahir goes Alex Kristine’s head CT and there is a tumor in her brain where one of the side effects is hallucinations.

Alex finds Charlie in the morgue and shows Kristine’s CT scan and thinks that Charlie could have the same thing. Charlie says he doesn’t and Shahir checked him over after he woke up. Alex thinks that the tumor could have been there but now is growing. Charlie thought the two were through explaining his gift. 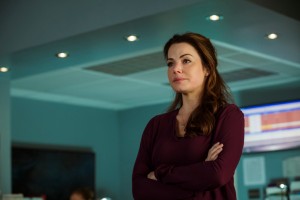 Later we see Alex and Charlie waiting for his radiology appointment to confirm or rule out a tumor. It seems the couple will be okay and as Charlie walks to radiology, we see Kristine’s spirit follow him.

Next week it does look like Charlie has that tumor but is reluctant to remove it and lose his gift.

This is what I am afraid of. Alex will convince Charlie to get the surgery but something goes wrong and Charlie is back in a coma communicating with spirits. I really hope that doesn’t happen.