It is the winter finale of Supergirl and boy was it a doozy. A lot of emotional stuff happening, a Cat reveal, an epic family feud and an action-packed cliffhanger.

Someone has hacked Cat’s emails and released it to the press. Among its findings that the Daily Planet has published is Cat’s real age, the fact that she has three personal Barney’s shoppers and was turned down by Idris Elba. Catco’s lawyers want Cat to take some action on this but she wants the Daily Planet to stop publishing her emails. When one of her lawyers says that Cat wouldn’t hesitate to publish Lois Lane’s emails that Cat considers their suggestions.

Cat then tasks Kara, James and Winn (whom Cat calls the Hobbit with more cardigans than Kara) to go through all of her emails. In the Superfriend office, Kara and James go through the emails while Winn figures out how the hack happened. Some of the emails found include Cat investing in the Jekyll and Hyde musical and over 300 emails calling Lois Lane some unflattering names.

At a board meeting, most of the board wants her to step aside but the chairman of the board, Dirk Anderson, supports Cat. After the board meeting, as Dirk is stepping into the elevator, Kara uses her super hearing to hear Dirk pretty much admit that he is behind the hack to get Cat to leave.

The Superfriends turn to Lucy for some legal advice on what do to about Dirk. Lucy suggests finding some evidence that links Dirk to the hack.

Winn comes up with an idea to place a bug that allows him to remotely hack Dirk’s computer. James is tasked to place the bug while Kara uses her x-ray vision to be the lookout. James succeeds but is caught in Dirk’s office but covers by saying he supports Dirk should Cat be kicked out.

Winn is still trying to find information off Dirk’s computer while James finds an interesting email from Cat’s bank asking for electronic signature. It seems that every month, Cat deposits some money in the account of one Adam Foster, a 24-year old in Opal City.

Kara goes to Cat with this information and believes that Adam is Cat’s boy toy. However, Adam is Cat’s oldest son, born out of a short-term relationship. Cat tried to sue for custody but failed as her career and building CatCo just took over and she just gave up. Kara wonders about choices mother’s make for their children after Cat states that she believed that Adam was find without her. Of course, we will be meeting Adam in the New Year and he will be played by Blake Jenner, Benoist’s real-life husband and also from Glee. And, by the way, when I heard the name Adam, I knew he was Cat’s son thanks to Smallville where that version of Cat had a young son named Adam.

Eventually, the Superfriends and Lucy have proof of Dirk’s duplicity. When Cat realizes that Lucy is Lois’ younger sister tells her that she got the looks in the family.

Cat confronts Dirk with her proof but he says that he finds it funny that she hacked him and he will have his lawyers on it. However, when Cat says that Dirk used CatCo equipment and email that everything belongs to her and he gets taken away.

Throughout the episode, James notes Winn’s jealousy of him and Kara’s relationship. James sees that Winn really likes Kara and says he should go for it. Winn feels like he isn’t in the same league as Kara and is afraid to take the risk but James encourages him to go for it. First off, I really love Jeremy Jordan as Winn. He is so adorable that I do ship Winn and Kara. Hey if Oliver can have Felicity then Kara and Winn can be together.

The episode opens where the last one left off with Astrid and her minions capturing Kara for a tete a tete. Astrid incapacitates Kara with Henshaw’s kryptonite blade while she and her minions are unaffected thanks to their suit that I think emits blue kryptonite while still maintaining their powers. Astrid wants Kara to join her in saving the planet while Kara tosses her self off the roof to escape. 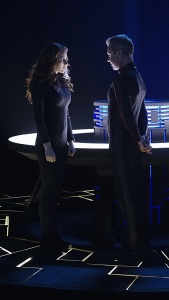 Later on, Non is none too thrilled that Astrid didn’t kill Kara and thinks she has gone soft. Astrid says she can turn Kara and doesn’t want Non to question her authority. Non doesn’t but says that if Kara kills Astrid, he will kill Kara and calls Astrid his wife.

At the DEO, Kara is all gone ho to find Astrid and tells of their invulernability to kryptonite. Alex wants Kara to go home and recharge and to leave it to Henshaw. Kara wonders when Alex had a change of heart about Henshaw. 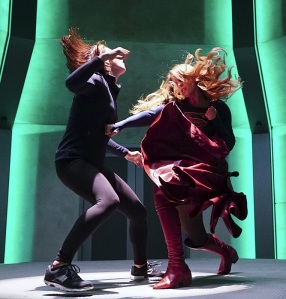 The next day, we see Kara and Alex spar and when Kara hesitates to land a punch on Alex, she takes advantage to take down Kara. Alex wonders what is holding Kara back and we get a Krypton flashback.

In the flashback, Kara uses a beacon to summon Astrid. We see that aunt and niece where once close. Astrid explains how Krypton is dying and she and others are doing what they can to try and save it by doing any means necessary. Their conversation is interrupted by Alura. The two sisters have a conversation about Astrid’s methods and begs for Alura to show some leniency. Alura is unmoved and takes her sister away.

Astrid is flying high above National City to call out Supergirl. When Supergirl arrives, the two battle it out over National City were building pieces rain down and cars too. But Kara manages to catch debris avoiding any human damage. Astrid is taunting Kara about Alura that just pisses Kara off more. Eventually, Kara manages to knock out Astrid to bring to the DEO. Astrid will only talk to Kara and she reveals that she kept her part of the beacon they used to communicate. Astrid tells Kara that her mom used her to lure her to her room in order to capture her. Kara is starting to believe Astrid and confronts the AI Alura. Alura does admit to using Kara saying it was necessary. When Kara asks why, the AI says she is not programmed to answer that question. Kara presses on to ask why Alura left her to be all alone and again the AI said she was not programmed to answer that qusetion. Alex has to console Kara as tears start to flow from her and this recapper.

Henshaw tells Alex that he wishes he could read minds of Kryptonians to find out what Astrid is planning and she seems surprised at the news. But all is not lost as Alex looks at video footage of the Astrid-Kara fight and realize that Astrid wanted to lose as a distraction for their real plan: invade Lord Enterprises.

Where is Kara in all this? Before being called away by Alex, she is bringing Cat some papers to sign. Cat wonders how Kara was able to hear Dirk’s confession when she was right beside her. Cat also listed numerous other examples of how when Kara disappears, Supergirl appears. Cat gets Kara to remove her glasses and thanks Supergirl for everything. Not quite sure what Cat is going to do with that information but wow, didn’t expect the power that be to let Cat in on the secret so soon. And can I saw that Calista Flockhart is really kicking it as Cat. Totally love Flockhart’s interpretation.

So Kara is called away and Supergirl flies in to save Alex just before she can get fried by Non. It should be noted that other aliens that were part of the fight was someone who can duplicate himself and merge right back up and a woman that breathes out a toxic gas. Henshaw goes all Martian Manhunter to defeat a Kryptonian and Kara and Non is about to engage in battle when we cut to the Supergirl logo.

And now we enter the winter break but will get a new episode on January 4, 2016 so see you then,