Tonight’s season finale was emotional, tragic and heartbreaking all at the same time.

We open the episode with a more subdued take on the “My Name is Barry Allen” instead of ending finding justice for his father, it ends with him finding it now.

Barry confronts Wells/Thawne in the pipeline and after dancing around the elephant in the room, Barry asks his former mentor why he killed his mom. Wells simply says it is because he hates the future Barry for reasons that aren’t important. And we learn that Wells will be born 136 years from now. Wells also presents Barry with the opportunity go back in time to save his mom so he can have the life he has always wanted.

Dr. Stein explains the time travel offer to Barry in that the timeline they are living in now is actually an alternate one that Wells created when he attempted to kill Barry as a child. Barry figures that if goes back in time to stop his mom’s murder, then he would grow up with both of his parents, meaning he will never have gone to live with Joe and Iris and never would have met Caitlin, Cisco or Ronnie. Joe tells Barry that he should go back to the past. Barry chases after Joe to say that he doesn’t have to go back but Joe insists that he should.

At the rooftop where the Flash and Iris met, Iris finds Barry in a contemplative state. Barry begs Iris to tell him what to do but Iris says that he should stop doing things for others and do what he wants to do.

So Barry returns to the pipeline and asks Wells how all of this will work. Basically, Wells says it involves using the particle accelerator where Barry will run Mach 2 and collide with a particle. This will open a temporal worm hole that will allow Barry to travel either to the past or the future. While this wormhole is open, Wells will use it to return back to his time. 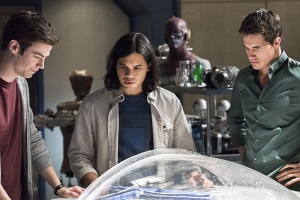 Barry agrees with Ronnie and Cisco helping build the time machine that Wells was starting to build. However, there is a hiccup where the metal that Wells wants to use will burn up in the wormhole. Cisco is forced to go to Wells to seek help, which he does. Cisco also asks Wells how he can see an alternate timeline where he killed him. Wells tells Cisco that he can see vibrations in the fabric of time and that he is a meta human too.

In happier news, Ronnie is back in Central City for good and re-proposes to Caitlin, who happily says yes.

Elsewhere in STAR Labs, Dr. Stein tells a down on his dumps Eddie that he plays an important role in this story because he is the great great great grandfather of Eobard and his future is how he makes it and not to listen to what Wells told him. With this talk, Eddie visits Iris at Central City Picture News and shares how they first met and tells her that he screws the future and that he loves her. And the two reconcile.

We then see Ronnie and Caitlin exchange vows with Dr. Stein officiating outside of STAR Labs’ doors. 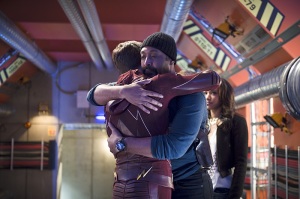 Just as Barry is about to go back in time, there is a slight problem where the wormhole might be unstable and create a black hole that will suck up all of Earth into its vortex. The solution is that the wormhole can only be kept open for one minute and 52 seconds and then needs to be immediately shut down. Barry and Joe have a final talk where Barry says Joe will always be a father to him and just before he starts to run to go back in time, he calls Joe dad.

Locked in the particle accelerator, Wells says “Run, Barry, Run” just as he did in the pilot but in a much more sinister way. As Barry reaches Mach 2, Barry starts seeing bits of the past and the future, which includes Caitlin as Killer Frost. Wells tells Barry to focus on the time his mom was killed and he will get there. Barry collides with the particle and disappears.

When Barry arrives, he is in his childhood bedroom. He hears the screams of his younger self and spies in the doorway the fight between his future self and the Reverse Flash with his mom in the middle. ust as Future Flash is about to whisk the young Barry away he wards off present day Barry. Barry closes the door and makes the decision to not save his mom. When the two speedsters leave, Barry emerges, sees his dad lying unconscious and goes to his mom’s side. Barry reveals himself as an older Barry and tells his mom that he and dad turn out okay and that he loves her. Pardon me as I wipe something from my eyes. 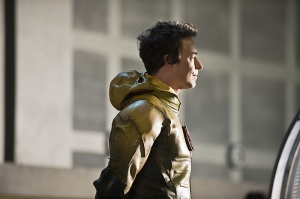 While Barry is back in time, Wells in his Reverse Flash costume takes a look at the time machine that Cisco and Ronnie built saying that it looks like the time machine that Rip Hunter used. This is the first reference to the future Legends of Tomorrow character on the show. Things start emerging from the wormhole including Jay Garrick’s helmet. Garrick is another version of the Flash. Wells takes this has his cue to leave and powers up the time machine. Just as Wells is about the leave, the Flash emerges and punches Wells and destroys the time machine at the same time.

With several seconds to spare, Ronni and Caitlin rush to close the worm hole.

Meanwhile, the Flash and Reverse-Flash fight each other in an epic battle. The Reverse-Flash overpowers the Flash and promises him that after he kills him, he will kill everyone he loves. Just as the Reverse-Flash moves in for the kill, we hear a gun shot and we see that Eddie, who was in the particle accelerator with Joe, Cisco and Iris, has shot himself in the chest. We realize that Eddie is doing this is because if he dies then that means Wells or Eobard will never be born. Iris is heartbroken at what Eddie has done but he tells Iris that he wanted to die a hero and now he has. As soon as Eddie dies, we see that Wells has dissolved back into Thawn who taunts Barry one last time about who will guide him now as he disappears from existence.

Unfortunately for Team Flash, the wormhole has reopened and is now the black hole that was feared to happen. Eddie and debris from the time machine get sucked in as well as buildings and cars. Looking on this scene is Henry, Captain Cold and Hawkgirl. Barry surmises that he needs to run into the singularity and someone run fast enough to make it dissipate. Season 1 ends with Barry speeding into the heart of the vortex.

I have to say I wasn’t expecting Eddie to sacrifice himself like that but I thought it was a beautiful way for his character to exit. I was hoping that Rick Cosnett would stay on the show in some way so it was sad to see him go just he was starting to get utilized. I liked how the show used Eddie versus how Gotham used Barbara. And how is Tom Cavanagh going to be a series regular next season? According to Andrew Kreisberg he will be.

And what about Ronnie? I would love to see Robbie Amell be a series regular on either The Flash or Legends of Tomorrow. Seriously can’t believe we have to wait 5 months to see what happens.