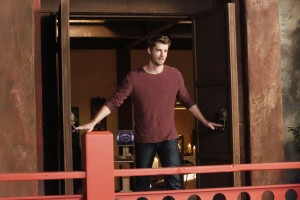 “Afterlife” has to be one of the best episode of SHIELD. It had tons of twists and turns that I didn’t see coming, a surprise guest appearance and our first episode with the mighty fine Luke Mitchell, late of the gone too soon The Tomorrow People.

There were three pretty distinct story lines tonight that makes it fairly easy to recap.

Coulson is at a used car lot trying to get a vehicle to use. When Coulson is about to bargain for one, Hunter drives down the lot with a Jeep that he pretty much stole so Coulson has to use the Icer on the salesman so they can escape.

The two then go to Fury’s safe house and see that the forest has been clear cut. The two watch surveillance footage and see that Skye was responsible. Hunter is glad to have her on their side. When Hunter starts to bad mouth Gonzalez, Coulson does defend him. When the two talk about what is next, Hunter sees there really are no good options open to them.

This inspires Coulson as he actually draws the real SHIELD to their location. Hunter thinks he is mad but Coulson assures that he has called backup but it will take them an hour to come. Good thing that the safe house was built to withstand the Hulk unless the soldier brought a battering ram, which they did. This only gives Coulson and Hunter an hour before they come in. As time ticks down, Coulson opens up the briefcase that May gave him and says it is the 21st century version of a Howling Commando kit and one of the things inside is a deck of cards.

The whole reason why Coulson called in the real SHIELD is so he can take one of the quinjet. As they approach the plane, another quinjet reveals itself and Coulson and Hunter are captured. As they are taken prisoner, Hunter thinks that all is lost and that Coulson really didn’t have back up. As the landing door closes, all of a sudden Mike Peterson aka Deathlock comes on the scene and takes out the soliders and the other quinjet. After a quick scan of the quinjet, Deathlock figures out how to fly it.

With no destination in mind, Coulson tells Hunter and Deathlock that there is only person they can turn to for help and it is Grant Ward.

When we last left Skye, she was being teleported away by Gordon. So the next time we see her, Skye is going through some high tech acupunture and is being tended to by Lincoln, her transition specialist. Lincoln’s job is to help Skye better deal with her powers and to make less painful.

Lincoln doesn’t exactly know where they are but there are mountains and it has a Chinese name that people just call the Afterlife. As they tour the compound, Lincoln explains that he is from Cincinnati and is only brought in when someone like Skye shows up. While walking, the residents are looking at Skye enviously. Lincoln explains that people are descents of those that have gone through the mist or have the genetic marker. They are just waiting to be chose. But Skye jumped the queue as she had a Diviner and touched it in a Kree temple. As they move further along the compound, Skye asks about a building but Lincoln says it is a transition room that is no longer used. Skye asks about her father and Raina but Lincoln doesn’t really answer.

Speaking of Skye’s dad, Cal is trapped in that windowless room with bloody hands. He is pissed and doesn’t really do a good job trying to beat up Gordon. Cal only wants to see his daughter but Gordon says his actions has it not possible for him.

Lincoln’s tour concludes at a cliff where he shows Skye his power: it is an electricity type of power.

Back at Skye’s room, over a bowl of popcorn, Lincoln explains that she will be assigned a guide to help her control her powers. Lincoln lets slip that Raina is at the compound so Skye rushes off to the not in use transition room.

Skye confronts Raina and blames her for everything that happened to her and for Tripp’s death. Raina meanwhile is still in her pity party phase. Skye doesn’t care and her quake powers start to manifest and hurting Raina, which she welcomes as she really wants to die. However, a woman stops Skye and lo and behold its Jiaying, whom Skye doesn’t realize is her mom. Jiaying says that Skye needs to be welcoming to Raina and declares that she will be her guide. Jiaying wants Skye to stay for a few days so they can work together and if they don’t feel a connection then she can leave. As Jiaying leaves, I have this strange feeling that Skye someone how knows that she has met her mother but I could be so wrong.

Later, Jiaying visits Cal to tell him that their daughter is at the compound but he still can’t see her. This is where I noticed that her face has a scars on it as if pieces of her were patched together. I am pretty sure we are going to get an explaination as to how she is still alive after what Whitehall did to her.

Meanwhile back at the real SHIELD

This recap is starting to get long so I will try and keep this part short. Gonzales interviews May asking her about her loyalties. May says it is to both Coulson and SHIELD as they are the same. Gonzales disagrees. Later on the aircraft carrier, Gonzalez offers May a seat on the board of SHIELD as it would good for Coulson to have a friendly face when he is captured. May seems to be contemplating the offer.

Back at headquarters, Bobbi is trying to convince FitzSimmons to open up Fury’s toolbox but the two don’t want to help. Fitz just wants to leave and can after being debriefed.

Later, Gonzalez tells Bobbi that he believes that Coulson is going to build a super power army with him going after Skye and recruiting Deathlock as examples.

Bobbi then tries to convince Simmons to get Fitz to change his mind but Simmons says she doesn’t need him as she thinks she can open it. As Fitz is packing to leave, Mack is trying to patch up their friendship. Fitz thinks Mack’s olive branch is to get him to open the toolbox but he says it isn’t as Simmons is working on it.

Fitz feels betrayed and confronts Simmons as she is working on opening the toolbox. Simmons defends her actions as they are all working for SHIELD. Fitz says that Simmons is doing this so he will leave and she agrees that she thinks it best that he does.

So Bobbi, Mack and Simmons sees Fitz off. In the coda, we see Simmons tell Bobbi and Mack that she has done all she could to open the toolbox but it really needs Coulson. We then see Fitz get into a cab and at first I thought the cabbie was going to be a bad guy. Instead we see Fitz open up his back to reveal that the Fury’s toolbox. FitzSimmons’ argument was all an act. Also included in Fitz’s bag is his favourite sandwich, with a note from Simmons, which she signed “love Gemma”. Let’s hope the FitzSimmons ship is back on!

Next week, we see how May became known as the Calvary and I for one cannot wait.