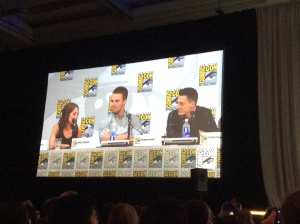 At San Diego Comic 2014 we learned a lot of new things and it all began with a teaser of what to expect in season 3.

In the teaser we see Brandon Routh’s Ray Palmer introducing himself to Oliver and Felicity. We also see the return of Sara in her Black Canary guise kicking some ass. We get a shot of Lance in a Captain’s uniform and see Roy in his Arsenal suit. We get a scene of Oliver and Laurel walking and talking and the teaser also showed Diggle and Oliver having an argument in the Arrow Cave. We get our first glimpse of the Hong Kong Flashbacks as we see Karl Yune as Maseo Yamashiro and Oliver have a confrontation with Amanda Waller. And the scene everyone looked forward to is Oliver asking Felicity out on a date and we see said date. The teaser ends as we see a bloody Felicity lying on a slab in the Arrow Cave wearing the dress from her date with Oliver.

Here is what we saw in Ballroom 20:

What we learned during the panel:

Here is the last 15 minutes of the panel but more will be coming: